Just days after a powerful 7.6 rattled Mexico’s central Pacific Coast, another earthquake jolted the Mexican state of Michoacán. The aftershock was felt in five states.

Just three days after an earthquake shook western and central Mexico, another powerful earthquake with a preliminary magnitude of 6.8 struck Mexico early Thursday, causing buildings to topple and leaving at least two dead in the country's capital.

The U.S. Geological Survey (USGS) said the quake occurred just after 1 a.m. local time in the western state of Michoacán, near the Pacific Coast. The epicenter was 53 miles from Lázaro Cárdenas, which is a coastal town in Michoacán.

According to President Andrés Manuel López Obrador, the aftershock was felt in Michoacán, as well as neighboring states Colima, Jalisco, Guerrero and Mexico City. 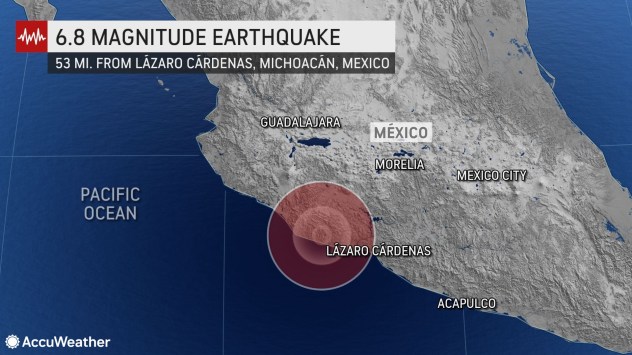 In Mexico City, at least two fatalities have been reported. The first one occurred in Mexico City's Doctores neighborhood, when a woman died after falling down the stairs of her home and hitting her head, Mexican law enforcement officials confirmed. Claudia Sheinbaum, Mexico City governor, confirmed the second death had been reported in the city's Educación neighborhood when a man died of a heart attack.

The earthquake caused damage to buildings and a landslide on the highway that connects Michoacán and Guerrero with the coast, ABC News reported.

Thursday's quake comes just days after a strong 7.6 rattled Mexico's central Pacific coast on Monday, Sept. 19. Monday's quake happened on the five-year anniversary of the 7.1 earthquake that killed more than 200 people in Central Mexico. Both Monday's quake and the 2017 earthquake occurred shortly after the annual earthquake drill, which is conducted every Sept. 19 to remember the powerful 1985 temblor that claimed the lives of thousands.

AccuWeather forecasters warn that weather conditions during the cleanup efforts over the next few days will be a bit unsettled. Temperatures will be in the mid-70s, but there is a chance for thunderstorms or rain showers each day through next Thursday. Widespread thunderstorms are expected to roll into the region Friday before they become more sporadic throughout the weekend.