The former NFL great has spearheaded an effort to tackle the problem of contaminated water in poor communities in the U.S. and abroad by rallying fellow professional athletes.

Chris Long knows what it’s like to have it all. The fame, fortune and good health – gleaned from his years as a star athlete on the NFL gridiron. But it’s his work off the field that has been less conspicuous to fans.

Over the years, the two-time Super Bowl champion has been working behind the scenes, using his celebrity might to drastically improve the quality of life for families living without even the basics.

A former NFL defensive end for teams like the St. Louis Rams, the New England Patriots and, more recently, the Philadelphia Eagles, Long was in the throes of an 11-season football career when he set his sights on tackling the persistent, real-life problem – a pervasive lack of clean water in impoverished villages thousands of miles away.

The seeds were planted during a trip to Mount Kilimanjaro in 2013 – a trip he describes as “life-changing.”

It was there, in the communities among the foothills of Tanzania, home to one of the world’s poorest economies, that he was taken aback by what he saw.

Adults, mostly women, were walking for miles often through dangerous terrain and amid intense heat, to collect water that was often dirty and laden with unthinkable contaminants. The women risked being attacked by men and wild animals along their route. When water would arrive at their homes, the villagers feared contracting water-borne diseases and illnesses from the contaminated water, which claimed many lives. Children who were very ill couldn’t attend school.

“I spent time with the local folks who were dealing with challenges we couldn’t even comprehend,” Long, 37, told AccuWeather Prime’s Adam Del Rosso recently. “When I left, I knew I wanted to give back” to a place that had given him so much.

That experience evolved into a charitable project aptly called Waterboys, which he launched in 2015 as part of his non-profit Chris Long Foundation. The program funds the installation of sorely needed deep wells that tap into water supplies for some of the poorest and desperately underserved parts of the world. 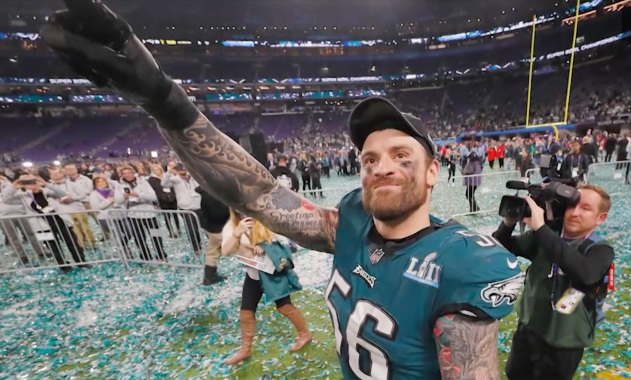 Each well, Long explained, yields clean water for 5,000 to 7,000 people. “They can be drinking from it for a generation.”

A proper water supply, he noted, can help communities flourish.

Long teamed up with many of his NFL brethren and, with their celebrity, helped raise funds, greatly expanding the effort and the installation of more and more deep borehole wells.

Along the way, he rallied more help and a number of professional athletes from the NBA and various other sports (soccer, baseball and martial arts) got involved to also support the cause.

“We have tremendous platforms as NFL players, as athletes and entertainers and it’s our job to direct people to the problem, to raise awareness,” said Long. “A lot of people don’t even know the problems and realities” other people live.

Long knows a bit about celebrity -- he belongs to a famous football family. His father, Hall of Famer Howie Long, played for the Raiders before becoming an analyst for Fox Sports.

“We’ve exceeded our wildest dreams,” Chris Long said of Waterboys’ impact, adding that once people travel to Tanzania, they “see how dire the situation is and they meet the people.”

He also started a program for communities in his own country because, he said, “the United States is not immune to water issues.”

Long’s foundation eventually started the project Hometown H2O to help many low-income, rural and tribal communities in the United States "that have been overlooked" -- in places like Virginia and Texas. His wife, Megan, oversees the Water4Her foundation program that partners with Waterboys to offer empowering life skills training to women and girls in Uganda, Rwanda, Tanzania and Kenya.

A study of poor households conducted by the Tanzanian Gender Networking Programme found "that the lack of safe, sufficient, and affordable water in Tanzania had increased rates of gender-based violence and the number of girls dropping out of school."

Long, who retired from the sport he loved in 2018, was honored for his charitable and philanthropic work that same year with the Walter Payton NFL Man of the Year Award.

The previous year, he had announced that he was also donating a year’s salary to youth scholarships as well as working to further other charitable causes in Philadelphia, Boston and St. Louis “whose missions focus on making education easily accessible to underserved youth while also providing students the support they need to develop strong social and emotional character,” according to his foundation website.

And he's not done. Long, who retired from the sport he loved in 2018, said “the sky’s the limit” when it comes to helping those in need.

In all, Long’s Waterboys initiative has bored over 400,000 wells both abroad and in the United States. The goal, he said, is to provide 1 million wells for those in need.

“Unfortunately, water scarcity and general awareness of contamination are becoming more hot button topics and so people are going to have to pay more attention to these problems. We have to be part of the solution,” he said.

“Our job is to get the message out and pass on the baton.”