Wet weather to continue into Memorial Day in the Pacific Northwest

Researchers at the University of Oklahoma say urban development and bigger storms linked to climate change are raising the risk of dangerous flash flooding.

The Pacific Northwest has been in a damp, soggy pattern in recent days, with most areas having received above-normal rainfall for the month of May. AccuWeather meteorologists say that this trend will continue over the coming days, making for a dreary and wet Memorial Day weekend.

This weekend's weather comes after an abnormally wet month in the Northwest, with many cities receiving well above-normal rainfall. Seattle has received 3.81 inches of rain so far in May, which is more than twice the normal amount of 1.88 inches. This May is now the second-wettest on record at Seattle-Tacoma International Airport, with May 1948 holding the top spot at 4.76 inches. Portland, Oregon, has received 3.61 inches, which is 144 percent of normal for the month, and Boise, Idaho, has received 140 percent of normal May rainfall.

The first wave of moisture arrived Saturday across the region, bringing areas of soaking rain as well as high-elevation snow. Hoquiam, Washington, broke their daily rain record of 0.70 of an inch for May 28 as 1.01 inches fell at the start of the holiday weekend.

As the storm system tracks away from the coast and into the Rockies into Monday, the swath of rain will follow. Much like on Saturday, there may be some breaks in the rainfall throughout the day, but a broader area may be impacted. Showers are expected to reach the High Plains of Wyoming and Montana by Sunday evening, before continuing throughout the day on Monday. 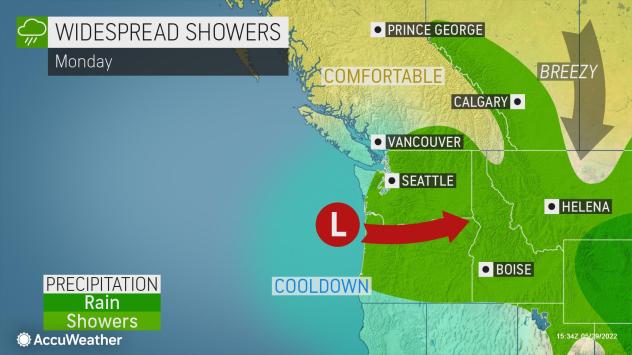 Across the high terrain of Idaho, Montana and Wyoming, more late-season snow is expected. While most passes should remain below snow levels, locations above 8,000 feet may be impacted by accumulating snow. Many of these roads are closed during the coldest winter months, but have since opened, making travelers vulnerable to rapidly changing conditions.

Meanwhile, additional showers may continue west of the Cascades into Sunday evening, with Seattle and Portland adding to their already impressive May rainfall totals. While any rain will remain light, it may be enough to interfere with any outdoor activities. By Memorial Day itself, while a stray shower can't be ruled out, conditions should be relatively dry.

While much of the Northwest has had a wet month, forecasters noted that drought is still ongoing across much of the region. Nearly half of Oregon is under an extreme or exceptional drought, with the entire state of Utah and 60 percent of Montana under at least moderate drought, according to the U.S. Drought Monitor.

"It will take much more than a single wet month to bust the ongoing drought, but rounds of rainfall over the weekend will be beneficial nonetheless," AccuWeather Meteorologist Adam Sadvary said.

While light rain may linger in portions of Montana and Wyoming on Tuesday, a general clearing trend is expected toward midweek as the storm moves eastward, allowing severe storms to fire across portions of the Plains.