La Niña will be a big influence when it comes to determining which parts of the country will experience a wetter-than-normal summer. Plus, is a repeat of 2021's historic heat wave in the cards? 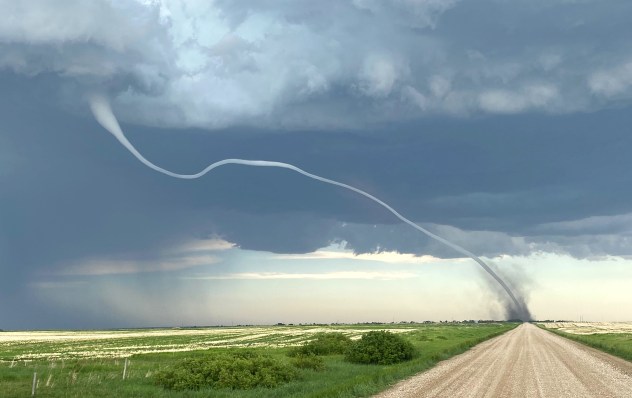 A tornado is seen on a field in D'arcy, Saskatchewan, Canada June 15, 2021. Neil Serfas via REUTERS

Summer is on the horizon for the Northern Hemisphere, and Canadians eager for a summer preview have come to the right place because AccuWeather has released its annual Canada summer forecast.

This seasonal outlook is spearheaded by AccuWeather Senior Meteorologist Brett Anderson, a veteran forecaster who has more than three decades of experience, much of which has been spent focusing on weather patterns impacting Canada. Anderson offers expert insight on the main weather themes expected across the country to help Canadians prepare for the upcoming summer season.

As was the case for the winter and spring, a moderate La Niña phase is expected to persist into the summer, according to Anderson. Examining past summers influenced by similar climatological conditions allows forecasters to piece together the atmospheric jigsaw puzzle of how the weather may unfold across Canada this season.

Many across Canada are likely hoping not to experience a repeat of last summer. The summer of 2021 was certainly brutal at times, especially in southwestern Canada. June 2021 saw the country break its all-time record high temperature on three consecutive days. The mercury soared to an extraordinary 121 F (49.4 C) on June 29 in Lytton, located in southern British Columbia -- a village that was engulfed by a devastating wildfire just about a week later. An average high temperature for that time of year in Lytton is in the upper 70s.

Will summer 2022 bring more of the same? AccuWeather meteorologists break down the upcoming summer season with a region-by-region forecast ahead of the arrival of meteorological summer on Wednesday, June 1, and the summer solstice, the first official day of summer, on Tuesday, June 21.

Potential for a wetter summer in western Canada

During a period of La Niña influence, western Canada is typically the portion of the country that experiences the most significant impacts, according to Anderson. La Niña is one of many teleconnections meteorologists study to determine weather outlooks on a seasonal scale. Teleconnections are essentially a correlation found between meteorological phenomena located a great distance from one another.

"It'll be wetter than normal across the northern part of the province with near-normal rainfall expected in the southern portion," Anderson explained. 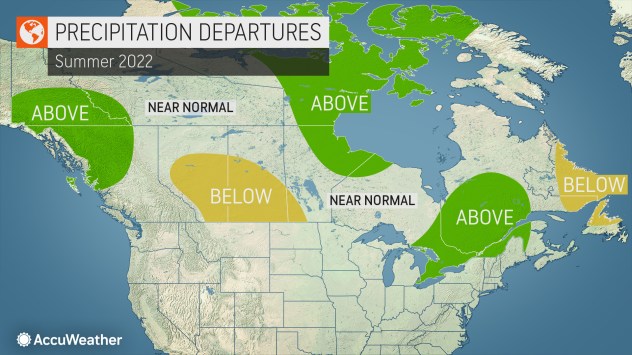 "Given current conditions and the teleconnections expected to be in place, we may see a reduction in fire activity this year, especially when compared to last summer," Anderson said.

Without an abundance of dry fuels, like dry grass or dead plants, the chances of wildfires developing are reduced.

In addition to at least average or above-average levels of rain falling from the sky for much of western Canada, the water flowing at ground level is also set to be in a good position this summer.

"Rivers and streams should continue to run near to above normal with ample runoff from a significant mountain snowpack," Anderson noted.

A deep snowpack, a layer of snow found in mountainous areas, is key during the coldest months of the year. Melting, or runoff, from this snowpack, works its way into area rivers and streams and keeps water flowing to many locations throughout the province during the summer season.

In terms of temperatures this summer, AccuWeather forecasters say anyone in western Canada dreading a repeat of last year's brutal heat may be able to breathe a bit easier this year.

Anderson expects air temperatures will be near normal for much of British Columbia, as water conditions in the Canadian Pacific are expected to be cooler than normal. Cooler waters just offshore will likely exert a notable influence on the air that flows inland over the province.

The hottest portion of the summer in Vancouver, British Columbia's most populous city, occurs in mid-to late July when high temperatures in the low 70s F (21-22 C) are common. The summer of 2021 saw the city climb well above normal each month in the summer and end the season at 4.8 F (2.7 C) above the average for the time period.

In terms of precipitation, over the course of a typical summer, Vancouver averages about 4 inches (100 mm) of rain from June through August. This works out to about 1.25 to 1.50 inches (32 to 38 mm) of rainfall each month during meteorological summer.

Drought to worsen as the Prairies become hot and wildfire-prone

While portions of western Canada are expected to encounter near-normal temperatures and near- to above-average rainfall, that will not be the case for other parts of the sprawling country.

"Ongoing and worsening severe drought across southern Alberta and southwestern Saskatchewan will likely feed the heat through the summer," Anderson cautioned.

The drought conditions in place as of mid-May across a swath of the Prairies are not a good sign as summer approaches.

Almost all of the southern portions of both Alberta and Saskatchewan are at least experiencing abnormal dryness, according to the Canadian Drought Monitor. A large percentage of far southern Alberta was in the midst of an extreme drought, the second-highest drought classification, as of late May. 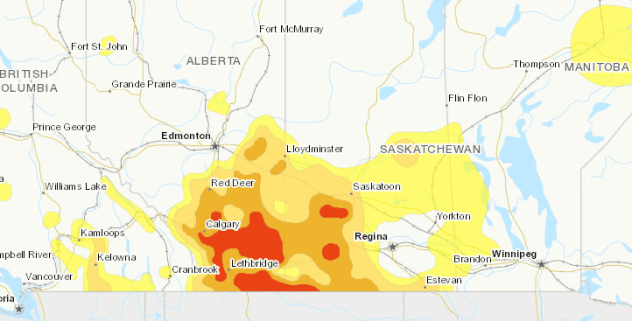 Dry ground is able to more easily radiate heat from the sun back into the lower levels of the atmosphere. This process raises the air temperature to a level several degrees higher than if the soil was moist.

"I expect a hotter summer compared to normal in cities such as Calgary and Regina," Anderson said, citing the ongoing drought as a key reason that temperatures will soar above normal.

The continued dryness and increasing heat will also spell another danger for parts of the Prairies: wildfires.

"These dry and warm conditions will likely lead to a higher risk for large, rapidly spreading fires across the southern Prairies," Anderson said. 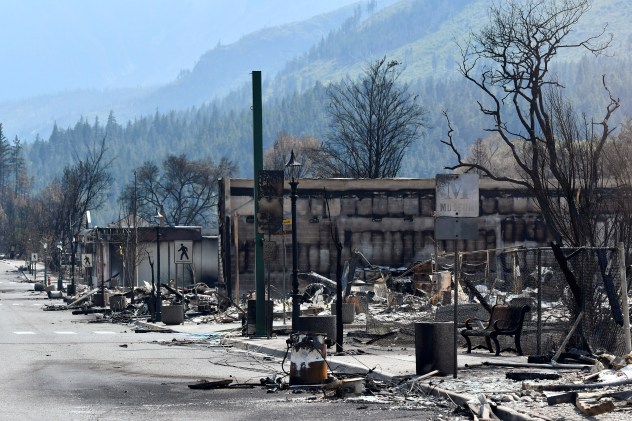 The charred remnants of homes and buildings, destroyed by a wildfire on June 30, are seen during a media tour by authorities in Lytton, British Columbia, Canada July 9, 2021. REUTERS/Jennifer Gauthier

The exceptions to this elevated heat and wildfire risk, at least in the early summer, are likely to be portions of southeastern Saskatchewan and southern Manitoba.

"The soil in these areas is still quite moist, with river flooding ongoing given recent rounds of heavy storms," Anderson said.

When soil is too moist, it can present a problem for farmers attempting to plant crops, Anderson pointed out, but the increased moisture may be able to temper the potential for above-average heat through the early summer in the eastern Prairies. However, Anderson doubts that this buffer for the eastern Prairies will last the entire summer.

"Conditions may flip to drier and hotter during the second half of summer as the soil dries out," Anderson cautioned.

Humid and warm for eastern and Atlantic Canada

AccuWeather forecasters say wet and stormy weather will be common across eastern Canada this summer.

Anderson has isolated a swath in eastern Canada extending from central and southern Ontario through western and southern Quebec as an area that will encounter above-normal precipitation and thunderstorm activity this summer.

"This may be a busy summer in terms of severe thunderstorms, especially from the Windsor to Toronto to Ottawa corridor," Anderson cautioned.

While wet and stormy conditions may put a damper on some summer plans, the good news is that increased amounts of precipitation generally lead to lower overall drought risk.

"The risk of sustained summer drought in this region appears to be low at this point, with many areas set to experience near- to above-normal rainfall," Anderson said. 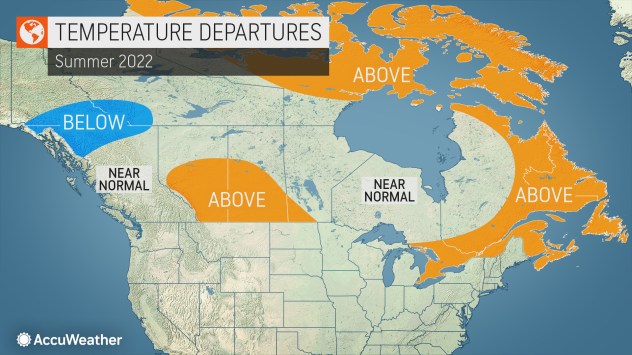 With this influx of extra moisture, Anderson believes that the upcoming summer will be more humid than usual. Humidity is the term meteorologists use to describe the amount of water vapor in the air at a given time.

"Increased humidity will lead to warmer nights when compared to normal, while temperatures during the daytime will be closer to normal," Anderson explained.

With more water vapor available in the atmosphere, the air closer to the surface is unable to cool as quickly as if the air were drier. During the times when summer heat enters the region, it may be difficult for some areas to shed the heat overnight following a hot day. 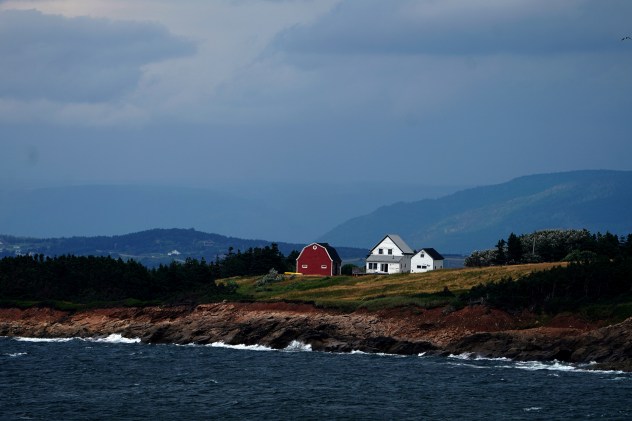 A farm is pictured at Cheticamp, Nova Scotia, Canada, on August 13, 2019. REUTERS/Carlo Allegri

In major cities, the urban heat island effect can further worsen conditions. Big cities often trap more heat given the sheer amount of paved or built-up surfaces in the area. These building materials are very slow to release the heat and cool down.

In terms of wildfire risk for the eastern portion of the country, there has been some early fire activity across northern Ontario and western Quebec this spring that has Anderson slightly concerned. However, the overall forecast trend of near- to above-average rainfall this summer should help prevent fuels from becoming tinder dry. In addition, humidity can also be an inhibiting factor in the growth of wildfires.

Humid conditions are also in store for Atlantic Canada, according to Anderson. Not only will humidity build, but given forecast trends in water temperatures around the region, this summer is likely to be warmer than normal.

"I expect water temperatures to average about 1.8-3.6 degrees F (1-2 degrees C) above normal in the Atlantic, off the coast of Nova Scotia," Anderson said. "This will have a warming and higher humidity influence on the surrounding area, especially at night." Therefore, it's likely that AccuWeather RealFeel® Temperatures will often exceed the reading on the thermometer in this part of the nation over the summer.

Rainfall amounts for the area this summer are expected to generally be near normal for much of Atlantic Canada, but Newfoundland could be the exception. Newfoundland may end up recording below-average precipitation, according to Anderson.

As the summer progresses, all eyes will likely shift to tropical activity. For residents of Atlantic Canada, Anderson sees some worrying trends.

"Based on La Niña and the projected higher-than-average Atlantic water temperatures, there can be a higher-than-normal risk for a landfalling tropical system in Atlantic Canada," Anderson cautioned. Indeed, AccuWeather forecasters are calling for another highly active hurricane season in the Atlantic basin in 2022.

The timing for this increased risk would largely be late summer and into the early fall.

Seaside resort town is being swallowed up by the Atlantic Ocean