The World Meteorological Organization warned of serious danger from the extreme temperatures that have gripped the northwestern U.S.

Grim news emerged in Canada’s western-most province of British Columbia on Wednesday just one day after one locale in the region set a new all-time record high for the nation at a scorching 121 F. The death toll from the unprecedented heat wave had climbed into the hundreds.

Lisa Lapointe, British Columbia's chief coroner, said 486 reports of "sudden and unexpected" deaths came in between last Friday and this Wednesday, which is well ahead of the 165 deaths the province normally sees in five days, The Associated Press reported.

The news came as the temperature in Lytton, a Canadian town nestled in the Coast Mountain Range of British Columbia, saw highs finally dip below the century mark after a record-smashing stretch. The high topped out at 99 F in Lytton on Wednesday, according to Environment Canada, as temperatures began to trend down from the peak of the blistering heat wave.

During the stretch from Sunday, June 27, to Tuesday, June 29, Lytton broke the all-time Canadian high-temperature record on three straight days. The stretch of record-setting warmth began on Sunday when the town reached 116 F (46.6 C). The record was broken on Monday with a high of 118 F (47.8 C) and again on Tuesday with an astonishingly high temperature of 121 F (49.6 C).

The previous record-high temperature recorded in Canada was 113 F (45 C) that was set on July, 5 1937, in Midale and Yellow Grass, Saskatchewan.

Lytton is no stranger to sizzling heat. The town previously recorded a temperature of 112 F (44.4 C) in 1941, which stood as the record all-time high temperature for the community until the most recent heat wave.

"The thermometer that recorded the record-setting temperatures likely still has to be checked for accuracy before the new record can be finalized, though this can take some time," AccuWeather Senior Meteorologist Alex Sosnowski said. 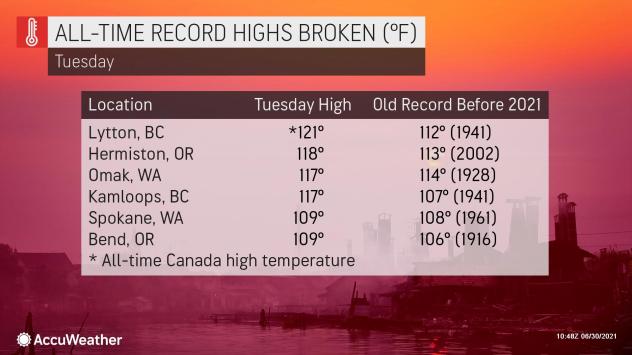 According to the World Meteorological Organization (WMO), British Columbia broke 43 all-time records as of June 28.

“The Northwest Territories have recorded their all-time highest temperatures not just in June, but any point in the year. We are setting records that have no business in being set so early in the season,” Armel Castellan a meteorologist with Environment and Climate Change Canada, said according to the WMO.

“Fewer than 40 percent of homes have air conditioning on the coast, people are having to go to libraries and shopping malls to find a couple of hours of air conditioning," he said.

"To highlight how unusually hot it has been for southern British Columbia, Lytton’s all-time high of 121 F (49.4 C) is higher than any temperature ever recorded in Las Vegas, Nevada, which has only ever seen the temperature climb to 117 F (47.2 C)," said AccWeather Meteorologist Adam Sadvary.

Other all-time high-temperature records were shattered on Tuesday across the border in the United States. Hermiston, Oregon, reached 118 F (47.8 C) while Omak, Washington, hit 117 F (47.2 C). 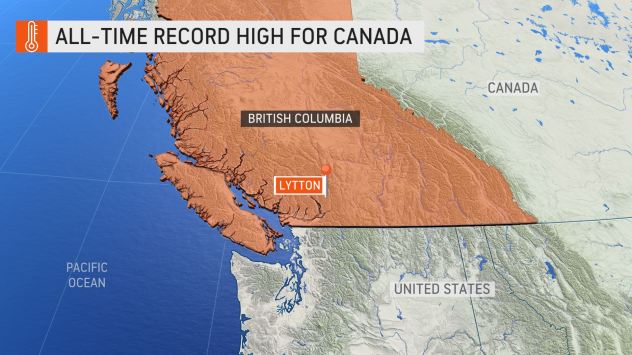 A specific series of weather events had to occur to allow for temperatures so extreme across the northwestern U.S. and western Canada.

"A strong area of high pressure in the upper levels of the atmosphere has been sitting idle over the Northwest and western Canada since late last week. This setup created a block around the jet stream, allowing air to stagnate over the region and quickly become dangerously hot," explained Sadvary.

The key to why Lytton got so hot is its location within a valley at the junction of the Fraser and Thompson rivers while simultaneously being surrounded by these exceptionally tall mountains.

"Daytime heat absorbed by the mountains was released into the valley which kept warm air trapped around Lytton," Sadvary said. "The high pressure overhead also allowed a breeze out of the south to bring additional warm air directly up the valley." 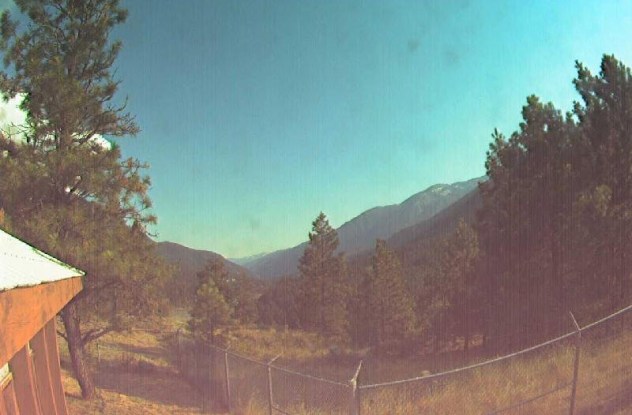 Webcam image from the airport in Lytton, British Columbia, on June 30, 2021.

"There is also ongoing drought across south-central British Columbia," AccuWeather Senior Meteorologist and Canada weather expert Brett Anderson pointed out. "Dry ground meant more of the sun's energy went directly to heating the ground and air instead of evaporating moisture."

"This combination led to the development of extremely dangerous heat that is typically only seen in the hottest desert locations around the globe," Sadvary added.

Shortly after Lytton set Canada's new all-time high temperature record, the dryness across British Columbia contributed to not only heat, but also wildfires. Evacuation orders were issued as fires sparked across the village of Lytton.

The extreme heat also turned deadly and the number of heat-related fatalities has soared into the hundreds.

Some of the highest numbers of deaths have come from Vancouver, where temperatures topped out at 90 F (32.2 C) on Saturday and again on Tuesday. The Vancouver Police Department said the number of heat-related deaths has depleted front-line resources and severely delayed response times throughout the city.

“Vancouver has never experienced heat like this, and sadly dozens of people are dying because of it,” says Sergeant Steve Addison, VPD. “Our officers are stretched thin, but we’re still doing everything we can to keep people safe.”

Across the Pacific Northwest and in Canada, at least 230 deaths have been reported, according to CNN.

While the peak of the heat has passed in most locations, it will remain dangerously hot across the region into the end of the week.

“In fact, record-challenging temperatures are likely to persist east of the Cascades and throughout western Canada into the early days of July,” AccuWeather Meteorologist Renee Duff said. “High temperatures can still soar close to 20 degrees above normal each day for many locations.”

Editor's note: This story previously said Lytton was nestled at the foot of the Rocky Mountains. The village is situated near the Coast Mountain Range in western British Columbia.