Thanksgiving forecast: Will rain put a damper where you live?

As millions across the nation look to celebrate Thanksgiving safely, the potential impacts from weather may be a bit different this year. Some Americans may celebrate Thanksgiving in new ways, holding meals and activities outdoors to maximize social distancing, but also leading to more exposure to what can often be tumultuous November weather.

Also different this year: Holiday travel is expected to be below normal. AAA estimated a significant decrease in travelers -- a 10% downturn this year compared to 2019 -- which may lead to fewer weather-related concerns.

"With health and government officials stressing that staying home is the best way to protect yourself and others from getting sick, AAA anticipates at least a 10% drop in travel – the largest one-year decrease since the Great Recession in 2008," the travel agency's annual holiday travel forecast said.

The Centers for Disease Control and Prevention (CDC) issued guidelines around the upcoming Thanksgiving holiday, which urged people to celebrate virtually with family members outside of their household, adding that "small household gatherings are an important contributor to the rise in COVID-19 cases." Also, the agency noted that the guidance is meant to supplement rather than replace state, local, territorial or tribal health and safety laws, rules and regulations on gatherings. 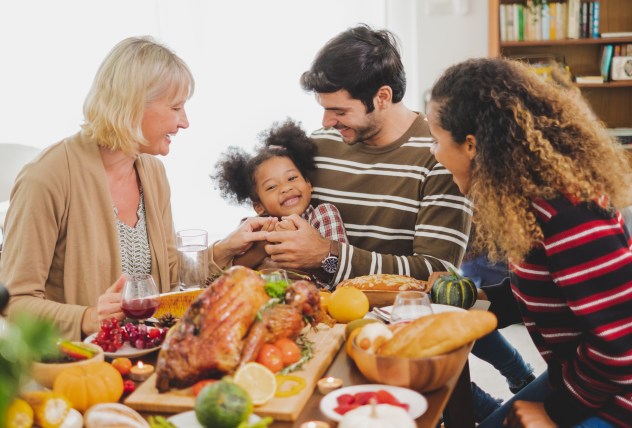 The CDC said virtual holiday gatherings with family members outside of the household are a safe option to avoid spreading the coronavirus. (Nattakorn Maneerat / iStock / Getty Images Plus)

With all of that in mind, here's a look at the weather conditions expected across the country for Thanksgiving week.

Relentless storminess to continue in the Northwest

A persistent train of storm systems will continue to pummel the Northwest with rounds of rain and mountain snow during Thanksgiving week. Any travel through passes in the Cascades will be especially tricky as snow continues to steadily pile up in the Cascades again during the holiday week.

There will be some breaks in the rain and snow, however, but the timing of each individual storm moving into the coast will determine exactly when dry periods may occur. 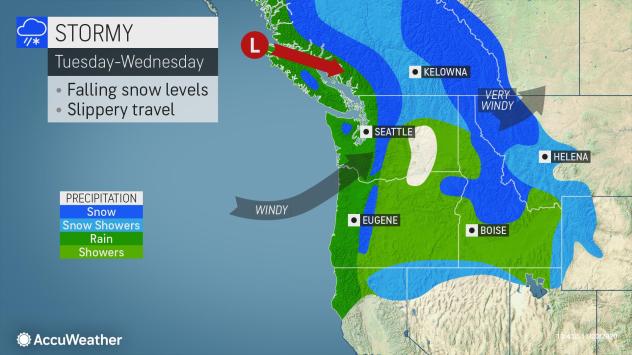 Damp and chilly weather for most of the week, even between the bursts of heavier rain and snow, will hinder those trying to take their Thanksgiving celebrations outside.

Gusty winds along the coast, can also lead to some isolated downed trees and power lines, which could necessitate a few detours for local residents or leave some trying to enjoy the holiday in the dark. 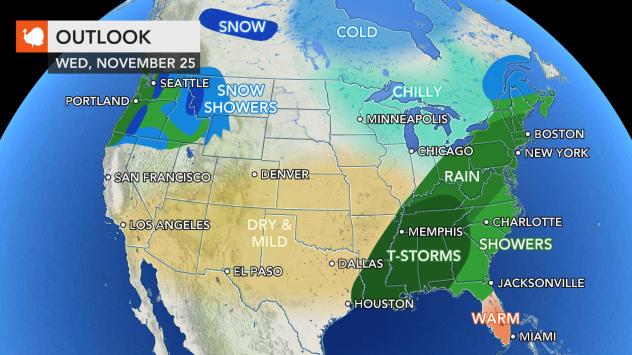 By the end of the week, a reprieve from stormy weather is anticipated, with drier and milder weather returning. This next drier spell could have some staying power through the holiday weekend.

The record-challenging heat gripping parts of the Southwest this week is expected to back off a bit by next week, but warmth will persist across the region for the holiday. 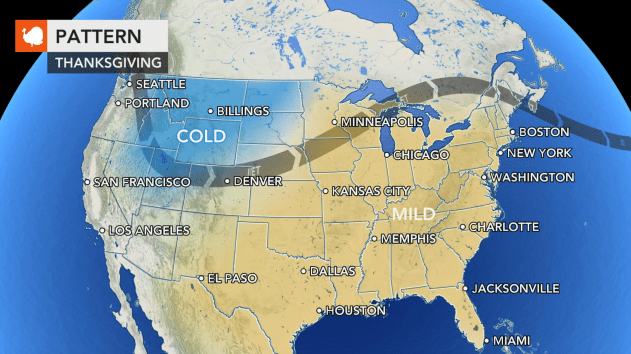 There will also be plenty of sunshine to allow residents to get outdoors and practice safe social distancing for the holiday. However, there could be a danger lurking in the forecast for some.

Will Iota follow in Eta’s footsteps and approach the US?
Winter sneak peek to be replaced with warmth from Plains to East Coast
‘Twindemic’: How to navigate flu season amid the coronavirus pandemic

Gusty and very dry offshore winds, known as Santa Ana winds, are expected to develop in Southern California. The strong winds will elevate the risk of fires in the region around the holiday, especially in the immediate days following the holiday.

Depending on the exact position of weather systems that will help to generate the powerful winds, issues could arise in some interior areas of the Southwest with gusty winds elevating fire concerns.

Anyone using turkey fryers or any other open flame to cook for the holiday outdoors will want to practice extreme caution, and people should heed any warnings and guidance from local officials.

Chilly and warm air will clash across the central and eastern U.S. all week, setting up the battlegrounds for stormy conditions in the middle. Fast-moving disturbances will draw batches of warmer air to the north north, but on the backside of the weather systems, surges of chillier air will instead be ushered in.

The first storm system will exit the Northeast early in the week, allowing another cooldown in its wake. The chilly air will follow a big warmup currently underway, potentially adding to the shock value. Temperatures will be on the rebound again in the Northeast by the middle of the week as another storm system will begin to develop in the nation's midsection.

The Thanksgiving week storm could deliver impacts to a much larger area of the nation when compared to the weekend system and may even bring some significant hazards, including wintry weather and slippery roads, flooding rainfall and even severe thunderstorms and perhaps a few tornadoes.

By the holiday itself, this storm system is expected to weaken, but it will still bring a chillier and damp holiday to parts of the East Coast. Temperatures will generally climb right around normal in places such as New York City and Philadelphia with highs predicted to reach the mid- to upper 50s.

If the storm system exits off of the East Coast with its associated rain a little faster, then much of the East Coast, including New York and Philadelphia, could see temperatures climb a few degrees above normal -- and perhaps the return of some sunshine.

However, this is more likely in some locales farther south, such as Raleigh, North Carolina, or Charleston, South Carolina, where highs a few degrees above normal would land them in the upper 60s to lower 70s. 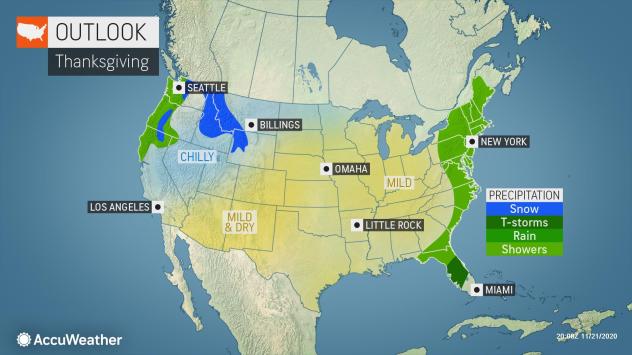 In the wake of this storm system, with a lack of cold air following the the storm, areas in much of the nation's midsection will also remain mild, with above-average temperatures and dry weather for the holiday. Chicago could experience highs around 10 degrees above normal with temperatures expected to reach into the low-50s on Thanksgiving. In St. Louis, high temperatures are expected to climb into upper 50s with a mix of clouds and sun for the holiday. This is in contrast to a normal high temperature right around 50 in late November.

In the southern Plains, the high could throttle up even more, reaching well above average in Dallas as the Washington football team faces off with the Cowboys. Temperatures are expected to soar into the mid-70s, compared to a normal high of 63 in Dallas -- a far cry from the coldest-ever Thanksgiving Day in the city, which set the stage for a memorable NFL game that turned into an icy bowl game in subfreezing temperatures.

Farther north and west, a more potent push of cold air will target the northern Rockies or Plains by Thanksgiving Day, leading to cold and breezy conditions. The cold air will begin pouring farther south and east later in the week and could potentially aid in spinning up yet another storm system that could aim again for the Plains and East over Thanksgiving weekend.