River of moisture to propel gusty storm across Northwest

As we head into the colder months of the year, we share some tips on how to dress for the changing seasons in order to stay warm.

Another feisty storm is setting its sights on the Northwest to finish out this weekend, bringing heavy rain, gusty winds, chilly weather and even some mountain snow.

"A slow-moving, potent river of moisture is flowing into the Pacific Northwest through this weekend," said AccuWeather Meteorologist Alyssa Smithmyer. "Locations along the northwest coast of Washington, such as Quillayute, are forecast to receive rounds of heavy rainfall lasting through Sunday."

Some of these areas could be at risk for flooding, particularly as gusty winds shove water onshore.

"As the frontal boundary approaches the Northwest, it will introduce windy conditions along the coastline before shifting farther inland," added Smithmyer. A small craft advisory was issued by the National Weather Service (NWS) on Friday along the coastal Northwest for gusty winds that could be hazardous to boaters.

Between 4 to 8 inches of rain is expected across parts of the Olympic Peninsula, with a widespread 2 to 4 inches in places through Sunday. 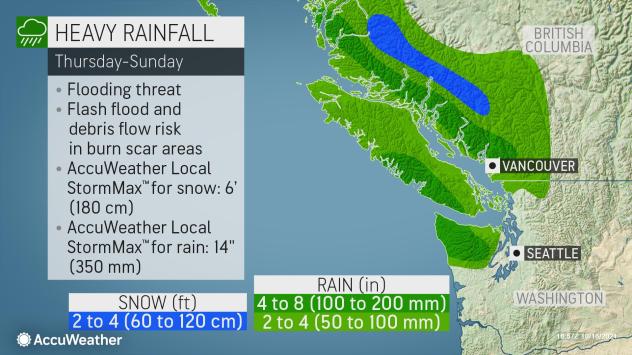 Though most of northwestern Washington is keeping a good pace with average rainfall, there are abnormally dry pockets around the Strait of Juan de Fuca, north of Puget Sound. Port Angeles has recorded only 31% of average so far in October, though the city already had a healthy helping of rain in September.

Areas elsewhere across the state could especially use the extra precipitation as over half of the area is in severe drought, with a quarter in exceptional drought, according to the United States Drought Monitor. Despite the rain being considered beneficial in places, this could still turn into a threat for flooding, particularly in burn scar regions.

"Burn scars from area wildfires can amplify the risks of flash flooding due to the limited vegetation present and repelling nature of the burnt soil," said Smithmyer. 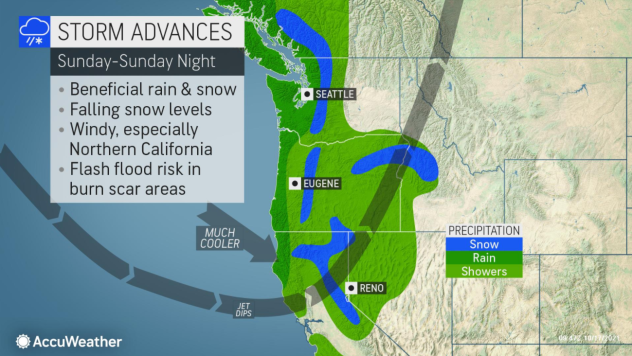 Progressing into Sunday night, rain and mountain snow is anticipated to expand into much of the rest of the Northwest, bringing showers to places like Spokane, Washington; Boise, Idaho; Redding, California; and Salt Lake City, Utah. Mount Shasta, California, is another area meteorologists are concerned about burn scars enhancing flash flooding.

Salt Lake City received its first snowflakes of the season on Thursday, but AccuWeather forecasters anticipate temperatures being a tad too high for anything but rain or showers there next week. Snow is forecast, however, across parts of the northern Rockies.

"On Sunday, precipitation will stretch far enough inland to impact mountainous regions and bring the threat of high-elevation snow," explained Smithmyer. Though snow is likely to stay above most pass levels, drivers should remain cautious of changing road conditions, especially as temperatures drop during the overnight period.

As a cold front attached to the storm shifts into the region, temperatures in the Seattle area dipped a couple of degrees below average on Friday, which is the lower 60s this time of year. Cities like Spokane and Bozeman, Montana, are forecast to see temperatures beginning to recover from the last storm, but this shot of cold air will keep them below average, which is in the upper 50s in mid-October.

Seattle's daytime temperatures are expected to dive once again on Monday when they will slip into the middle 50s. The situation will be similar in Vancouver, British Columbia, where high temperatures will tap into the lower teens Celsius on Sunday.

Also, as the front expands and pushes inland on Sunday, Portland, Oregon, and even San Francisco could be affected by cooler air. Portland isn't likely to have temperatures rise above 60 F, while San Francisco can have high temperatures nearly 8 degrees below the normal of 72 F.