'Raincouver' to finally get a break after drenching month of precipitation

Areas from the Midwest to Northeast could feel disruptive impacts in the days leading up to Thanksgiving.

Relief is in sight for the rain-weary Pacific Northwest come December, but residents need to make it through at least one more gusty, rainy storm that could bring rain totals to record levels.

"To say it has been an active month in the Northwest is an understatement," said AccuWeather Meteorologist Joseph Bauer, explaining that the observation site at the Seattle-Tacoma International Airport has received 10.14 inches of rain through Nov. 29, which makes it at least the fifth wettest November on record for that site.

After a summer of devastating drought, this region is now overflowing with rain. In some places, this excess of rainfall has even been dangerous. Earlier in the month, an atmospheric river caused major flooding and landslides, washing roads and railroad tracks away near Vancouver.

Already known as Rain City or "Raincouver" to some, Vancouver has reported over 8.75 inches of rain so far this month, which is over twice the amount the city receives in November on average. The short-range forecast isn't looking much better for the West Coast, as another potent storm is expected to arrive this week. 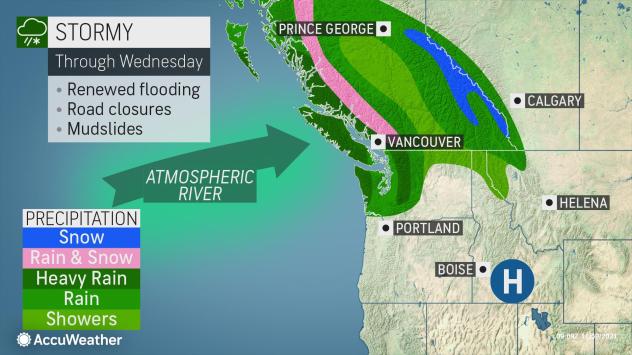 "More precipitation is on the way early this week, which will add up to an additional inch to Seattle's total before month's end," warned Bauer. The heaviest rain is forecast to fall from through Wednesday, primarily in western Washington state and coastal British Columbia, Canada.

Though an inch or two of rain may not seem like enough for flooding, due to the recent non-stop rainfall, the ground is already saturated and many bridges and roads have only recently been repaired after the last several storms. The storm could cause flooding of rivers and streams, landslides, road closures and even snow mixing in with the rain at higher elevations. Motorists should also be aware of changing visibilities, and residents should prepare for power outages as gusty winds could down trees easily due to saturated soil.

This storm could even push many rainfall totals close to record levels.

"The record amount of precipitation in November for Seattle-Tacoma is 15.63 inches set back in 2006, so this month will likely not beat that record, but will definitely place its mark within the top 5," added Bauer.

Vancouver is likely to receive about 2-4 inches of rain, with 4-8 inches falling just to the north. This higher-end amount of rain accompanied by more widespread flooding is also expected across the Olympic Peninsula and much of Vancouver Island by Wednesday evening. Fortunately, relief is now in sight for residents of the waterlogged region.

"The weather pattern is changing heading into early December with a large area of high pressure moving into the northern Pacific," said Bauer, adding that this will act to decrease the potential for additional atmospheric river events in the Northwest, lowering the frequency of precipitation.

Early December is anticipated to bring a much-needed break from continuous rainfall and allow rivers and creeks to recede a bit.