8 warning signs that a landslide is about to strike

Landslides, which are the movement of a mass of debris, rock or earth down a slope, can happen in any of the 50 United States. Knowing what to look out for before a landslide occurs can help you escape harm’s way.

Although landslides kill an average of between 25 and 50 people in the U.S. annually, the worldwide landslide death toll reaches the thousands, according to the U.S. Geological Survey (USGS).

“There are some areas where we either know from data or we can estimate that landslides are more likely,” said Dr. Dalia Kirschbaum, a landslide research scientist at NASA's Goddard Space Flight Center.

“Areas along the Himalayan Arc have landslides every monsoon season, and the Philippines and Indonesia are also hot spots for landslide activity,” Kirschbaum said. 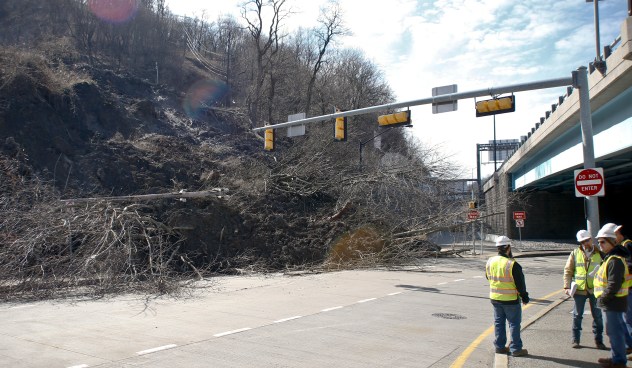 Workers stand along a roadway that was shut due to a landslide in Pittsburgh. (AP Photo/Keith Srakocic)

The mountain range extending from the Pacific Northwestern states down through Mexico and the western portion of South America are also among areas that experience landslides, according to Kirschbaum, who also noted that prolonged rainfall is the largest trigger of these natural occurrences.

“Other triggers include earthquakes, human-induced activities such as digging or construction, building of roads and poor sanitation,” Kirschbaum told AccuWeather.

Temperature can also contribute, as the freezing and thawing of rocks can lead to cracks which can result in landslides, Kirschbaum said.

Areas burned by forest and brush fires are also particularly susceptible to landslides, according to the American Red Cross.

“Landslides generally happen in areas where they have occurred in the past, so it’s important to learn about your area’s landslide risk,” said Tom Heneghan, senior manager of community preparedness education programs for the American Red Cross.

Below are eight warning signs to be aware of that could indicate the start of an impending landslide. 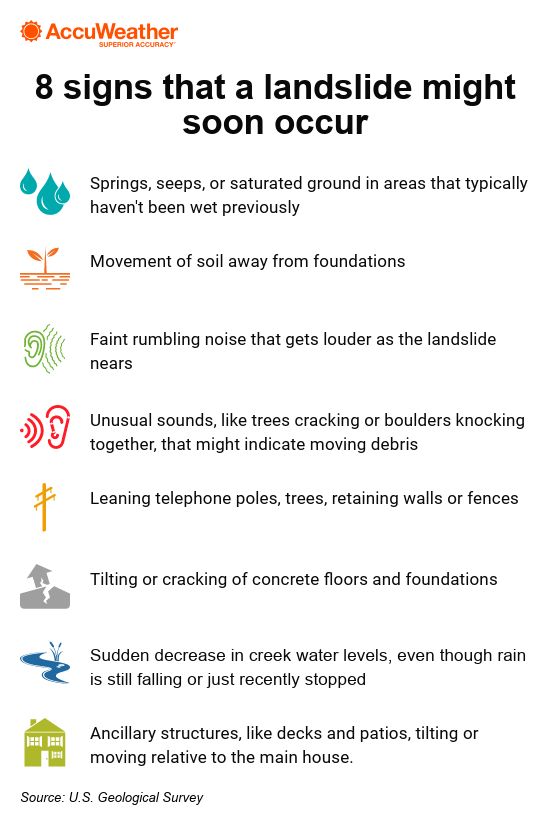 “If you are near a stream or channel, be alert for any sudden increase or decrease in water flow, and notice whether the water changes from clear to muddy,” advised Heneghan. “Such changes may mean there is debris flow activity upstream, so be prepared to move quickly.”

When on the road, drivers should be especially alert and watch for collapsed pavement, mud, fallen rocks and other indications of possible debris flow, Heneghan said.

Continuous or an increased number of cracks on a slope can be an indicator of an impending landslide, Kirschbaum said. Unusual noises also provide clues.

“For example, prior to the Oso, Washington, landslide in 2014, there were reports of hearing crack and pops, and they could hear the hill deforming slowly beforehand,” she said.

“If there are concerns, you definitely want to contact local engineering groups, the county or the environmental management groups within the local county to investigate what might be the cause of that disturbance [and whether it could result in a landslide]," Kirschbaum said.