Headed on a big ski vacation this winter? Or maybe just a weekend jaunt? Here's what you need to know about how weather will impact the ski slopes throughout the Northeast, Midwest and western U.S.

As ski resorts continue to open up across the country, AccuWeather's long-range forecasters have been looking ahead at the conditions you could experience on the slopes this winter.

The holidays and the start of ski season are typically intertwined. Americans seeking outdoor fun during their extended breaks often find solace, even a thrill, in laying some of the first tracks through fresh powder on the slopes. And ski destinations hope that a season beginning as early as Thanksgiving, if not sooner, can give them the jumpstart to a long, prosperous winter.

But, alas, sometimes the weather doesn’t quite cooperate.

Outside of the typical juggernauts that are annually among the first to open, such as Vermont’s Killington Ski Resort and Arapahoe Basin in Colorado, many ski slopes are still looking to welcome skiers and snowboarders, and some have even had to delay planned openings until early December due to recent unseasonable warmth.

AccuWeather’s team of long-range forecasters, led by Senior Meteorologist Paul Pastelok, has examined how the weather conditions during the late autumn to early spring will set the table for ski resorts to either have a successful season, or, perhaps, one that’s less than stellar.

A number of climatological factors will shape this ski season, but perhaps the most influential will be the presence of a climate pattern known as La Niña, a phase in which water temperatures in the equatorial Pacific Ocean are lower than normal for an extended period of time. A La Niña pattern can greatly dictate how the weather during the winter season across the United States unfolds, particularly when it comes to the storm track, which can eye the northern tier of the U.S. due to a stronger polar jet stream, and the parts of the country where the coldest air may settle. 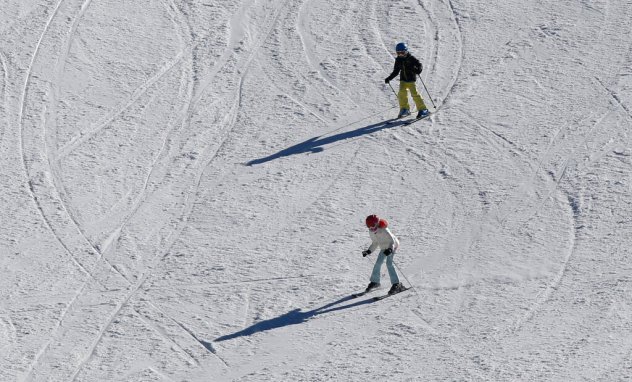 A pair of skiers make their way down the hill at the Sierra At Tahoe ski resort near Echo Summit, Calif., Thursday, Jan. 30, 2020. (AP Photo/Rich Pedroncelli)

For ski resorts to keep trails fresh, they’ll need frequent rounds of snowfall, or air cold enough to keep the snow guns routinely firing, to ensure the slopes are packed with powder. This season, resorts across the Upper Midwest, northern Rockies and Northwest can greatly benefit from La Niña, and more frequent storms with normal shots of cold air. Meanwhile, areas farther south in the U.S. will be less fortunate.

The ski industry rebounded in a big way last winter following the pandemic-shortened 2019-2020 season. In terms of total skier visits, 2020-2021 was the fifth-best ski season on record, according to the National Ski Areas Association (NSAA). The NSAA said that there were more than 59 million skier visits (counted as every time a skier or snowboarder visits a resort) across the U.S.

"Americans yearned for safe outdoor recreation, and ski areas across the country delivered,” Kelly Pawlak, NSAA President and CEO, said at the end of last season.

Here’s a region-by-region breakdown of how the weather will influence the 2021-2022 ski season across the United States.

An excellent ski season is shaping up across the interior Northeast for areas from northern Pennsylvania and western New York, up through Vermont, New Hampshire and parts of Maine. However, there could be some early-season hiccups.

Some storm systems early in the season have, and still could, deliver more rain than snow, which could affect the snow base at these resorts or lead to slushy conditions, Pastelok explained. Some warmups in the middle of December, and later in the winter season, could interfere with ideal snowmaking weather. 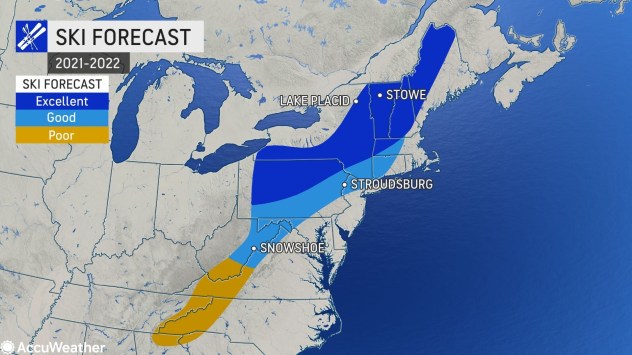 Far northern areas of the East will do much better this season because they are likely to avoid the worst of the warmups, according to Pastelok.

Long-range forecasters are monitoring for a potential warmup accompanied by rainy stretches around mid-December that could bring an inopportune thaw in the time leading up to the Christmas period.

“Unfortunately, it will affect mainly central and southern parts of New England into the mid-Atlantic states,” Pastelok said.

The late-winter thaw will make it tough to replenish the snowpack from parts of southern Pennsylvania into Connecticut as well as parts of the central and southern Appalachians. Any pronounced warmup in February could also mean an early end to the ski season for some of the smaller resorts in the mid-Atlantic.

The Northeast has already had one potent nor’easter, but that delivered precipitation in the form of only rain to the region during the end of October. In terms of nor’easters that will deliver the type of fresh powder that skiers dream about, those might not develop until the heart of the season. The chances of a big storm system with the potential for snow developing in the Northeast in December like in 2020 is lower, but not zero, according to Pastelok.

Based on past seasons, it's also not out of the question that a snow event could unfold during the latter half of the season.

“Below-normal temperatures are expected for the ski areas across the Midwest,” Pastelok said, adding that there will be a “fair share” of storms, and particularly when the storm track begins to trend farther west. 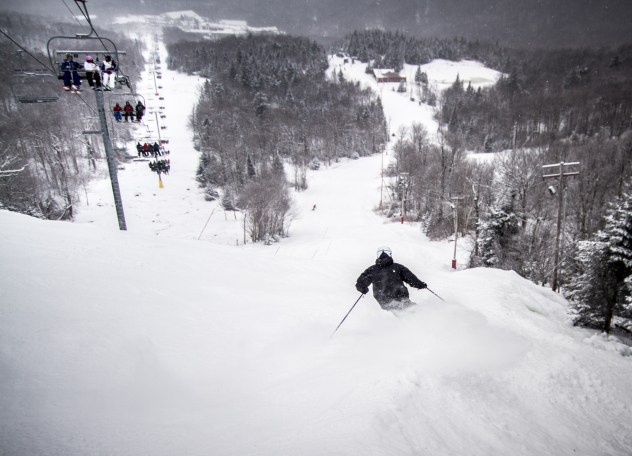 A skier slices through the snow at Bolton Valley Ski Resort in Vermont. (Photo/Ski Vermont)

December and February, in particular, are when some good snowmaking storm systems could bring fresh powder to Midwestern slopes.

Pastelok said that at this time it’s hard to see any parts of the Midwest experiencing a poor skiing season, although there will certainly be the occasional stretches where conditions briefly warm up. One concern Pastelok noted is invasions of Arctic air that might mean conditions become too cold, particularly when it comes to operating ski lifts.

“That’s my main concern," Pastelok said, pointing out that the "type of cold we could see in January and February coming down [from the polar region]” could be pivotal. "A lot of it may depend on the polar vortex. We’ll have to continue to watch that. It’s pretty early to tell whether that’ll be a factor, but we do see some significant cold coming in.”

The theme for the West this season will be the shifting of the storm track throughout the winter, a process that has already taken place during autumn.

Parts of the West have already been inundated with soaking storms from the Pacific, including California back in October which was walloped by a record-breaking bomb cyclone that unloaded heavy rain in lower elevations and feet of mountain snow in the Sierra Nevada. More recently, an atmospheric river pounded western Washington and British Columbia, Canada, with historic rainfall amounts. That type of back-and-forth in the overall storm track, which could result in lulls in precipitation, could be both good and bad for skiers and snowboarders. 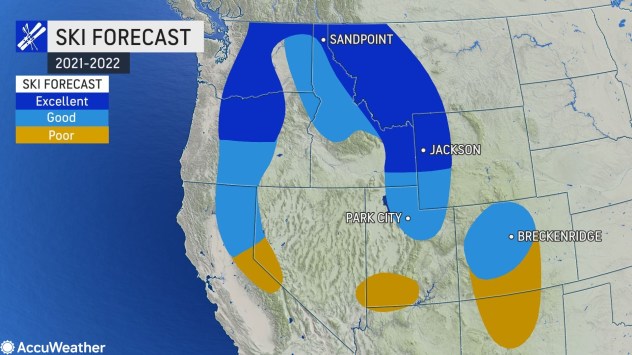 “You’ll be able to get to the slopes in those lulls, but at the same time the powder may start to get kinda roughed up, and smushed down,” Pastelok said.

The best ski conditions will likely be found in the Northwest and those conditions could even allow for some extended early spring skiing. During a La Niña phase, the region is typically hit pretty hard by storms, but that can be dependent on how strong the La Niña phase remains. If ocean temperatures in the equatorial Pacific approach more normal levels, meaning a weakened La Niña pattern, the result could be fewer snow-producing storms for the Northwest, according to Pastelok. Still, the Northwest and northern Rockies will likely be hit with storms on a more persistent basis than areas farther to the south.

Western areas that could have a subpar ski season include regions from Central California to southwestern Utah, southern Colorado, and northern New Mexico. An area of high pressure across the Southwest has recently allowed dryness to build in spots and temperatures to rise, which is more typical in a La Niña pattern. This part of the West still can see some action on occasion as the storm track shifts south. Water temperatures are running cooler than normal in the Northeast Pacific and warmer farther west. At times the storm track will be forced southward by this setup as the Southwest upper high-pressure area breaks down. The result can be heavier snowfall to the mountains of Central and Northern California and extending into the central Rockies.

Pastelok said his team recently updated the outlook to account for “good” skiing conditions in parts of northern Utah and north-central Colorado. These areas won’t have “excellent” conditions because of the chances for lulls in the stormy pattern.

Ski resorts in Utah have been combating unseasonable warmth that has delayed or impacted planned openings for several areas.

Park City Mountain Resort in Utah had targeted Nov. 19 for its season to begin. However, recent warm weather delayed its opening day, although snowmakers at the ski resort have been making good progress, according to a statement posted on the resort’s website.

AccuWeather National Weather Reporter Bill Wadell recently traveled to Solitude Mountain Resort, which also had to push back its opening date from the weekend before Thanksgiving to Nov. 23.

A big snowstorm dropped 63 inches of snow back in October at Solitude. But conditions have been mainly warm and dry since, helping melt much of that natural snow away, Wadell reported.

Ian Reddell, Solitude's avalanche mitigation manager, told Wadell that the mountain was still holding onto a lot of snow at the top of the mountain, but much had melted at the lower regions of the ski area, which caused the resort to utilize its snow machines.

Reddell has noticed a trend of slower starts to the season in recent years, but since Solitude receives an average of about 500 inches of snow every winter, he isn't too worried.

"By the end of the season, it seems like you kinda forget about the slow start to the early season," Reddell said.