Young Wang Yuji wasn't even born this time in 2020. But less than a full year into her life, it only took her one try to become a successful snowboarder and a viral sensation.

Teaching a child to walk can be difficult, but apparently teaching them to snowboard isn't. Here's the story of one 11-month-old from China that hit the snowy slopes.

At 11-months-old, toddler Wang Yuji can't do too much yet on her own. However, while the toddler can barely walk, she has mastered one activity: snowboarding.

Video of young Yuji emerged from the city of Chongli in Hebei Province, China, on Nov. 14, when the girl's parents took her to a ski resort. According to her mother, Fan Xueyin, the successful ride was on her first-ever attempt.

As the country prepares to host the Winter Olympics in February, during which Chongli will be a co-host city, Yuji's parents taught themselves how to snowboard out of excitement for the event. Among the other sports they love, such as cycling and running, the parents hope their daughter shares in their interests. 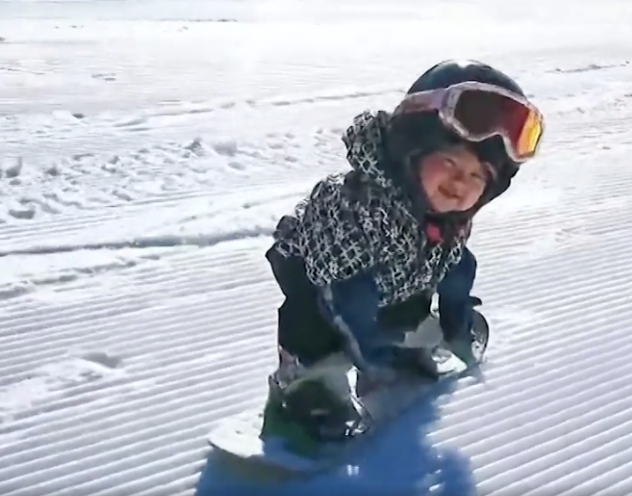 "Our family's philosophy has always been that we encourage our child to do whatever sports we parents do," Fan told Xinhua News. "We don't choose sports that we don't know how to do ourselves. I went snowboarding with her dad, so we got her a little snowboard too."

As shown in the video captured by her father, Yuji clearly had a blast. The youngster can be seen smiling cheek to cheek as her tiny board glides through the snow. According to the Daily Mail, her father said she can't control her board's direction yet, but "if the snow is just right then she can go all the way."

Citing his young daughter's early showings of athleticism, Yuji's father said she was able to stay balanced on the board during the slow slide downhill due to her good physical fitness. Yuji's mother added that they planned on introducing her to the sport when she was older, "but she really loved it."

The sport itself isn't the only thing the toddler loved about the slopes. An avid fan of the wintry outdoors, Yuji's father said her first experience with snow left her mesmerized.

"She's curious of the snowflakes, she saw the snow for the first time earlier—the snowflakes disappear as soon as they land in her hands which is a magical thing for her," her father said.

Daredevil soars toward space on top of a hot air balloon

Whoa! Meet the slackliner who's teetered on lines thousands of feet in the air