Daredevil soars toward space on top of a hot air balloon

The 28-year-old adventurer who completed the wild stunt went even higher than he planned -- 3,637 meters into the sky. Afterward, he explained why he chose such a specific number.

Rémi Ouvrard has broken the world record for highest altitude atop a hot-air balloon. He performed this feat for France’s Telethon fundraising event over Chatellerault, France, on Nov. 10.

Riding a hot air balloon is scary enough for those afraid of heights. Now, instead of being in the balloon's canopy, imagine standing on top of the balloon as it climbs higher and higher into the atmosphere.

As it turns out, someone decided to take the idea past the imagination stage. Rémi Ouvrard, a 28-year-old Frenchman, just broke the world altitude record for standing on top of a hot air balloon. The balloon climbed 4,016 meters above the French town of Chatellerault, which is roughly equivalent to 2.5 miles.

The conditions for Ouvrard's adventure were perfect, with the weather cooperating to make his journey above the clouds as smooth as possible. 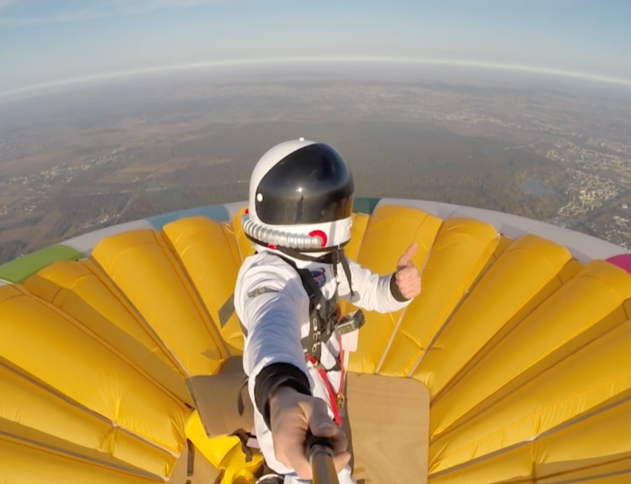 Rémi Ouvrard soared above the French town of Chatellerault while standing on top of a hot air balloon. (AFP)

Ouvrard was also lucky enough to have a trusted pilot taking him up to the skies. The balloon's seasoned pilot was his father, Jean-Daniel Ouvrard.

As the balloon soared upward, Ouvrard was treated to an out-of-this-world view, with the villages below his feet becoming smaller and smaller as he rose farther up into the air. At one point during his flight, the tips of wind turbines on the ground peeked out of the clouds like a scene out of a science-fiction film.

While the trip took Ouvrard more than 4,000 meters high, the actual goal was just 3,637 meters. That may seem like a strange number, but it had a symbolic purpose.

"The main objective is at least 3,637 meters. Why? Because the phone number to make donations is 36-37, so symbolically we thought that it would have been great to reach at least this altitude," Ouvrard said.