A repetitive storm track is likely to send waves of rain from the Red River to the Ohio and Tennessee River Valleys, bringing with it the risk for flooding.

Meteorological winter began just a few days ago as the calendar turned to December. Ever since, AccuWeather meteorologists have been warning that the first days of December could bring tumultuous weather across the eastern U.S. Waves of cold air could bring the opportunity for snow in the coming week in the northern tier of the country, while southern locations should be on alert for the risk of flooding.

Wet weather will begin as a storm emerges from the southern Rockies by Monday morning. The weather setup ahead of the storm will help to make it more impactful to the southern U.S. 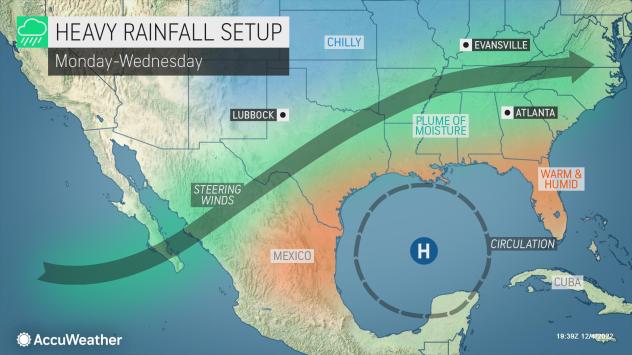 "A persistent area of high pressure over the Gulf of Mexico will bring in moisture from the Pacific, supplying the storm with plenty of moisture as it emerges from the southern Rockies," said AccuWeather Senior Meteorologist Tyler Roys.

A wide-swath of rain is expected to expand from eastern Oklahoma and northeastern Texas on Monday through the Tennessee and Ohio Valleys on Tuesday and Wednesday.

Even as the center of the storm treks into southern Ohio on Tuesday, the lingering moisture and another storm will push into the southern Plains, bringing additional rounds of rain back across the lower Mississippi and Tennessee Valleys.

The heaviest rain is likely to trek just to the south of the storm's center, focusing on parts of Arkansas, Tennessee, northern Mississippi, northern Alabama and northern Georgia. In this zone, widespread rainfall amounts of 1-2 inches, but it's not out of the question that a few places could see 3-4 inches of rain by the middle of the week. 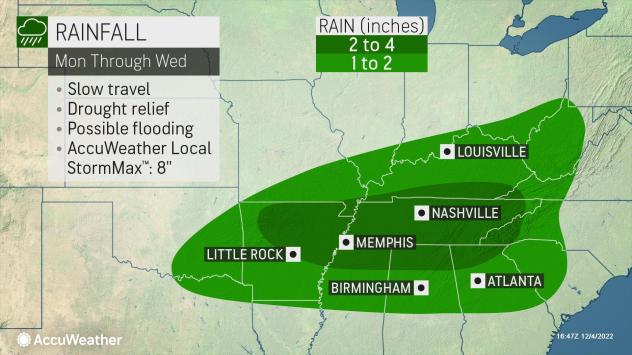 "The greatest risk for flooding is likely in those localized areas where repeated downpours hit the same spot, especially if that location is in a drought," explained Roys.

Many communities in the region threatened by the rounds of rain have been abnormally dry, and some are even in a more persistent drought. According to the recent update from the U.S. Drought Monitor, much of Kentucky, Tennessee, Georgia and Arkansas is in a severe drought, while parts of eastern Oklahoma are experiencing an extreme or even an exceptional drought. 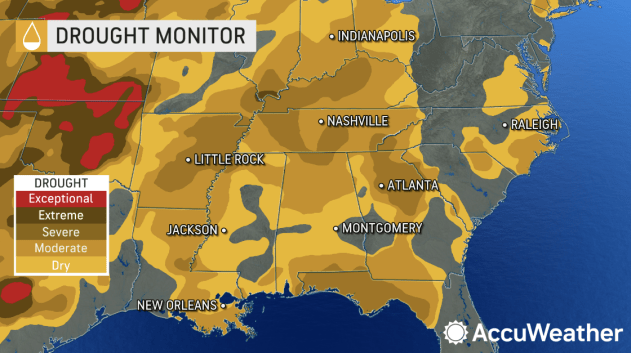 Since Sep. 1, only 5.52 inches of rain has fallen in Louisville, Kentucky, which is 49% of normal. In that same time frame, cities like Nashville and Atlanta have only seen 64% and 60% of their normal rainfall, respectively.

While the upcoming rain would be good for these areas in the long run, too much rain in a short amount of time can instead lead to flooding. Low-lying areas will be most susceptible to flooding, and motorists should be on alert for ponding on roadways and reduced visibility in heavier downpours.

AccuWeather meteorologists say that some rumbles of thunder could also accompany the rain as it sweeps through the region. Should either storm strengthen more rapidly as it emerges from the Rockies on Monday, it's not out of the question that a small zone of severe thunderstorms could develop, especially with the warm, humid conditions in place across much of the southern Mississippi River Valley prior to the storm's arrival. 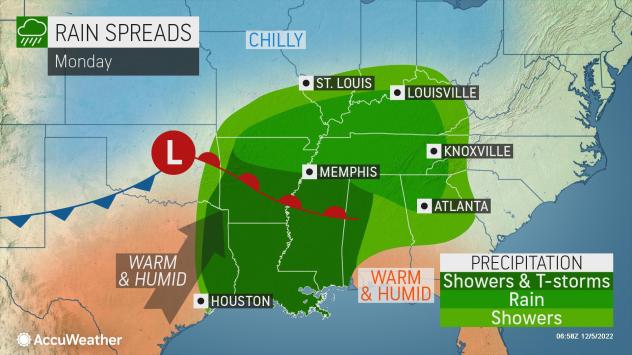 Residents in eastern Texas as well as Arkansas, Louisiana and Mississippi should continue to check back with AccuWeather for the latest on the threat of severe weather late Monday or Tuesday. The most likely threats in any potent thunderstorm that develops would be damaging wind gusts.

These same locations were threatened by severe weather in the final days of November. On Tuesday, Nov. 29, severe thunderstorms produced more than three dozen tornadoes and 100 wind reports across Louisiana, Mississippi and Alabama. The dangerous storms caused widespread damage in several communities and killed at least two people.

After Wednesday, the active weather pattern could bring even more opportunities for rain at the end of the week and next weekend. AccuWeather meteorologists will be monitoring if these subsequent storms could bring snowflakes before the winter holidays.