While extreme cold has gripped parts of the United States in recent days, the very opposite has been true below the equator. In the Southern Hemisphere, summer is in full swing and a heat wave could shatter century-old temperature records in South America.

AccuWeather meteorologists say portions of the southern half of the continent will experience temperatures that could rival all-time record highs, which is expected to lead to a massive strain on local infrastructure.

"A strong high pressure area over the mid-continent will result in temperatures 10-20 F (6-11 C) above normal across much of central and northern Argentina to western Uruguay, southeast Paraguay and parts of Rio Grande Do Sul through Saturday," AccuWeather Lead International Forecaster Jason Nicholls said.

The heat, which has been building since the weekend, is projected to peak into Saturday. In this stretch, temperatures may approach the highest mark ever recorded on the continent – a staggering 120 degrees Fahrenheit (48.9 degrees Celsius), which was recorded in Rivadavia, Argentina, on Dec. 11, 1905. 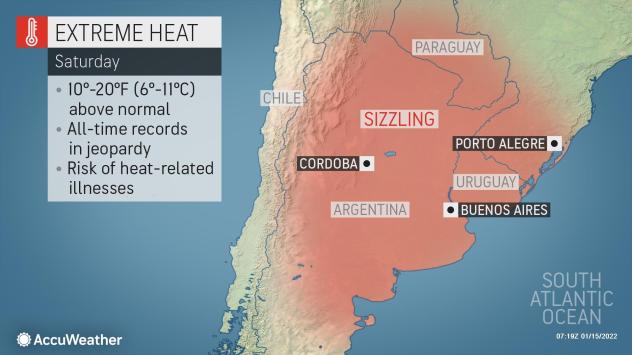 On Tuesday, Buenos Aires, a typically temperate city bordering the southern Atlantic Ocean, recorded its second highest temperature since records started being tracked there in 1906 -- a staggering 106 F (41.1 C). The hottest reading there is 110 F (43.3 C) from Jan. 29, 1957.

The searing heat led to massive power outages across the city which affected 700,000 people, according to Reuters. A majority of the power outages were due to the enormous cooling demands for homes and businesses, but about 43,000 of the outages were a result of a failure of lines at two substations, the news agency said. Residents were asked to limit water usage as the outages impacted the city's purification system.

"I came home and we were without electricity and the house was a furnace," Buenos Aires resident Jose Casabal told Reuters. Jose and his children off sought relief from the heat at a family member's swimming pool, the news agency said. 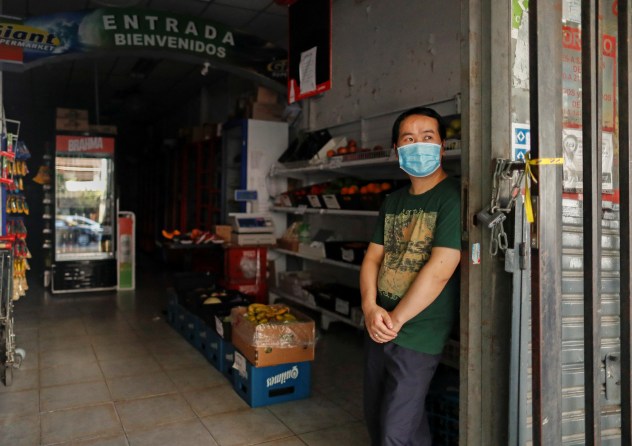 A seller waits for costumers at his shop during a blackout, amid a heat wave, in Buenos Aires, Argentina January 11, 2022. REUTERS/Agustin Marcarian

"I do not have air conditioning at home and we were with just the fan blowing hot air. It's unbearable," Gustavo Barrios from Tigre said via Reuters.

Wednesday provided a brief break in the heat for communities bordering the southern Atlantic Ocean as the wind moved inland off of the water. However, Mother Nature ratcheted up the heat once again late week.

"Areas farther inland are expected to feel the worst of the heat and reach 110 F (43 C) or higher for multiple days," AccuWeather Meteorologist Alyssa Smithmyer said.

Across much of northern Argentina, temperatures are expected to climb into the upper 90s to lower 100s F (36-39 C) once again Friday, which is about 15 F (8 C) above the average for the middle of summer.

The guidance that forecasters utilize to assist in the creation of forecasts suggests that temperatures very close to South America's all-time record high are possible across interior areas, should this heat wave reach its full potential. Even if the all-time record high is not matched, the length and intensity of the sizzling conditions are likely to leave their mark across the region. 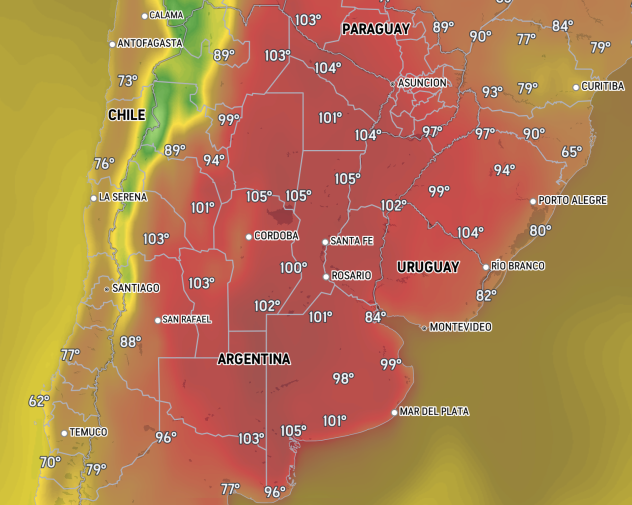 Such a prolonged period of heat will continue to lead to a significant increase in energy demands and can put further strain on the power grid and additional power outages. Temperatures as high as predicted can also cause pavement to buckle and warp, leading to travel disruptions.

This latest wave of extreme heat comes shortly after the announcement that 2021 finished in the top 5 list of hottest years across the globe.

Much of the region affected is also in the midst of a drought, and the combination of the heat and continued dry weather will only act to worsen these conditions.

Argentina's national weather service has issued orange and red level alerts for extreme temperatures across much of the region this week, indicating moderate to extreme effects on health.

Forecasters advise residents and visitors to take precautions in the heat, such as drinking plenty of water to stay hydrated, limiting time outdoors, wearing light-colored and loose-fitted clothing, spending as much time as possible in a cooled environment and avoiding strenuous activities if at all possible. These measures can greatly lessen the risk of heat-related illness, such as heat exhaustion or heatstroke.

AccuWeather meteorologists do have good news in that the pattern looks to break down beginning next week, bringing much cooler weather to the region.

A system will bring the risk of thunderstorms and begin to break the heat wave on Sunday, according to Nicholls. He added that there may be enough heavy rain to heighten the risk of flash flooding in Chile's Atacama Desert Friday into Saturday.

Tranquil waterfall tourist spot suddenly rocked by deadly tragedy
2021 sees 20 billion-dollar weather disasters, fewer than active 2020
Will the ‘Gates of Hell’ crater ever die out in this remote desert?