2021 finished in top 5 hottest years for planet on record 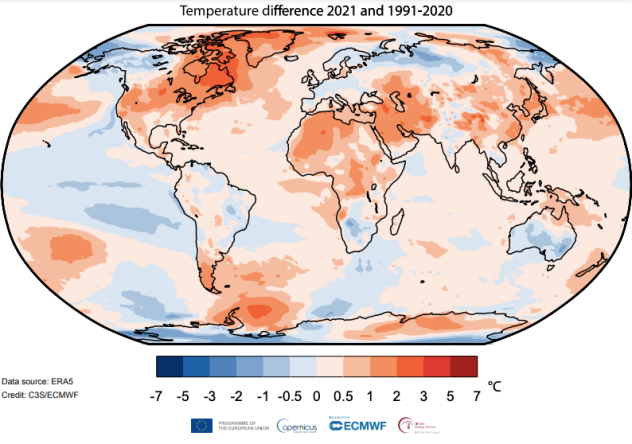 Air temperature at a height of 2 meters for 2021, shown relative to its 1991–2020 average. Source: ERA5. Credit: Copernicus Climate Change Service/ECMWF

A year with concrete-buckling heat, devastating deluges and a location in the so-called "cone of cold" experiencing 80-degree heat have illustrated what the seventh consecutive hottest year globally on record has looked like worldwide.

The European Union's Copernicus Climate Change Service (C3S) found that 2015 through 2021 were the seven hottest years on record on a global scale "by a clear margin," with records dating back to 1850 -- a total of 171 years.

"2021 was yet another year of extreme temperatures with the hottest summer in Europe, heat waves in the Mediterranean, not to mention the unprecedented high temperatures in North America," Director of the Copernicus Climate Change Service Carlo Buontempo said. "The last seven years have been the seven warmest on record. These events are a stark reminder of the need to change our ways, take decisive and effective steps toward a sustainable society and work towards reducing net carbon emissions."

The fifth hottest year on record manifested with Europe seeing its warmest summer on record as well as a devastating heavy rainfall event that swept across the central and western part of the continent, leaving thousands without homes and close to 200 people dead.

As for Asia, Oymyakon, Russia, widely considered the coldest inhabited place on Earth, had a record-high temperature of 88.8 degrees Fahrenheit (31.6 degrees Celsius) in June -- a vast difference from the June average of 68 degrees. Five months prior, temperatures in Oymyakon had plummeted to 73 degrees Fahrenheit below zero back during January -- a 161-degree difference. 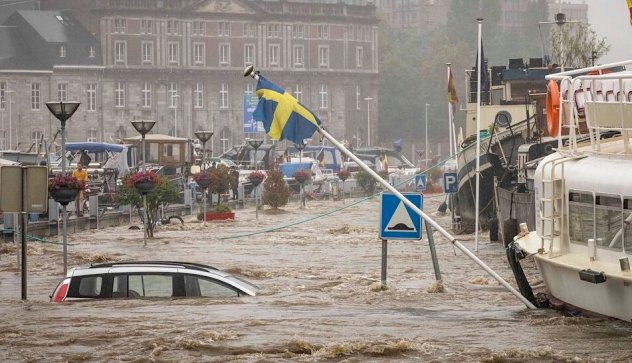 A car floats in the Meuse River during heavy flooding in Liege, Belgium, Thursday, July 15, 2021. Heavy rainfall is causing flooding in several provinces in Belgium with rain expected to last until Friday. (AP Photo/Valentin Bianchi)

In the context of the U.S., 2021 finished as the fourth-warmest on record for the nation. Stubborn drought nearly wrung dry the reservoirs across the West, an unprecedented December derecho devastated the Midwest and a concrete-buckling heat wave scorched the Pacific Northwest.

After the Pacific Northwest experienced a heat wave that claimed over 100 lives, cracked pavement and melted cables, June 2021 became the warmest June on record for North America. Portland, Oregon, saw three consecutive days of all-time high-temperature records from June 26-28 as the mercury reached 108 degrees F, then 112 F and 116 F. The city typically experiences average high temperatures only reach the low 80s during the hottest months of the year, July and August.

While June 2021 was followed by the 13th hottest July on record for the contiguous U.S., the month globally "earned the unenviable distinction as the world's hottest month ever recorded," according to NOAA's National Centers for Environmental Information (NCEI). 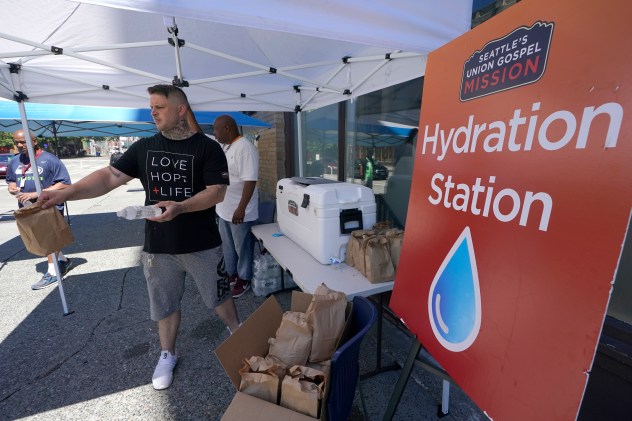 Carlos Ramos hands out bottles of water and sack lunches, Monday, June 28, 2021, as he works at a hydration station in front of the Union Gospel Mission in Seattle. Seattle and other cities broke all-time heat records over the weekend, with temperatures soaring well above 100 degrees Fahrenheit (37.8 Celsius). (AP Photo/Ted S. Warren)

The year featured the hottest summer and third-hottest autumn on record for the U.S., with 2021 concluding with December taking the title of hottest December on record for the contiguous U.S., according to Climate Central. Temperatures that month measured at 6.7 degrees F above average.

From 1970 to 2021, the average annual temperature across 98% of 246 U.S. locations surveyed by Climate Central increased, 67% of which warmed by more than 2 degrees F and 28% by more than 3 degrees F. The greatest warming was in the Southwest, led by Reno, Nevada, seeing a 7.7-degree increase, Las Vegas with a 5.9-degree increase and El Paso, Texas, with a 5.1-degree increase.

"More heat-trapping greenhouse gases in the atmosphere leads to warmer and riskier conditions like we experienced in 2021," the Climate Central report said. "And recent emissions trends are headed in the wrong direction. Global carbon dioxide (CO2) emissions from fossil fuels grew by 5% in 2021 relative to 2020, rebounding to pre-pandemic levels."

C3S, partnering with the Copernicus Atmospheric Monitoring Service (CAMS), also detailed that preliminary analysis of satellite measurements confirmed atmospheric greenhouse gas concentrations continued to rise during 2021, with carbon emissions from wildfires worldwide spewing out 1,850 megatonnes -- higher than last year's measure of 1,750 megatonnes of carbon emissions. Despite the increase in 2021, the trend of carbon emissions from wildfires worldwide has generally been declining since the records began in 2003.

However, that does not lessen the impact wildfires had in 2021.

"In all, North America experienced the highest amount of carbon emissions - 83 megatonnes, and other pyrogenic emissions from wildfires for any summer in the CAMS data record starting in 2003," according to C3S. 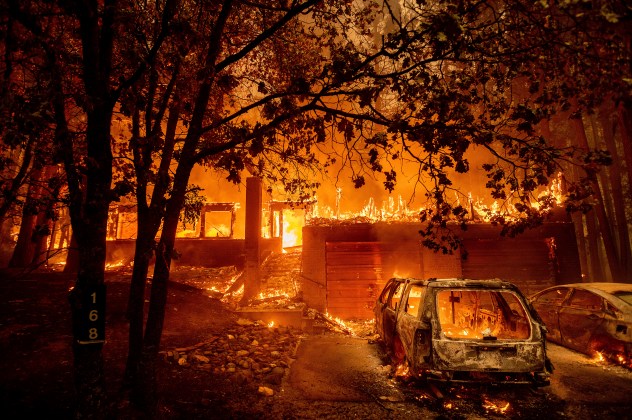 Regional hot and dry conditions exacerbated extreme wildfires throughout the U.S., feeding into a vicious cycle of wildfires spewing more carbon emissions, which in turn led to warmer and riskier conditions for more wildfires.

The wildfires across the western U.S. during 2021 burned over 7.1 million acres. Nearly 1 million of those acres (960,000 acres) was from the Dixie Fire alone, which now ranks as California's second-largest wildfire on record. The wildfire season ranks as one of 2021's weather and climate disaster events that caused at least $1 billion damage.

2021 was the seventh consecutive year that the U.S. saw 10 or more billion-dollar weather and climate disaster events in 42 years of recordkeeping. Outside of this time frame, the only other years that had 10 or more of these events impact the nation were 1998, 2008 and 2011-2013, according to NCEI. While 2020 had a record of 22 billion-dollar disasters in a single year, 2021 saw a total of 20 billion-dollar disasters. This includes events ranging from Hurricane Ida slamming into Louisiana before trekking into the Northeast to the bitter freeze that stretched across Texas around Valentine's Day.

The long-term average of billion-dollar events per year since 1980 is seven. 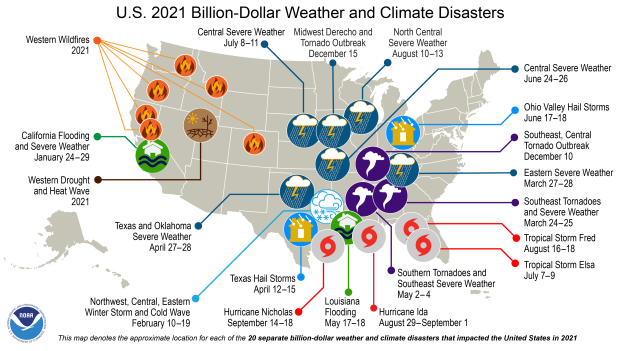 An overview of the 20 billion-dollar disasters that occurred in the U.S. throughout 2021. (NOAA National Centers for Environmental Information (NCEI) U.S. Billion-Dollar Weather and Climate Disasters)

To add insult to injury, the average time between billion-dollar disasters in the U.S. has dropped from 82 days in the 1980s to 18 days on average from 2016 to 2020, according to Climate Central.

While the news of a changing climate and significant increase in weather and climate disasters can be disheartening, experts stress that it's crucial to recognize where the world is at in order to make more effective action.

"Carbon dioxide and methane concentrations are continuing to increase year on year and without signs of slowing down. These greenhouse gases are the main drivers of climate change," Director of the Copernicus Atmospheric Monitoring Service, Vincent-Henri Peuch, said. "This is why the new observation-based service led by CAMS to support monitoring and verification of anthropogenic CO2 and CH4 emissions estimates will be a crucial tool to assess the effectiveness of emissions mitigation measures. Only with determined efforts backed up by observational evidence can we make a real difference in our fight against the climate catastrophe."