Coldest inhabited place on Earth is baking in record heat 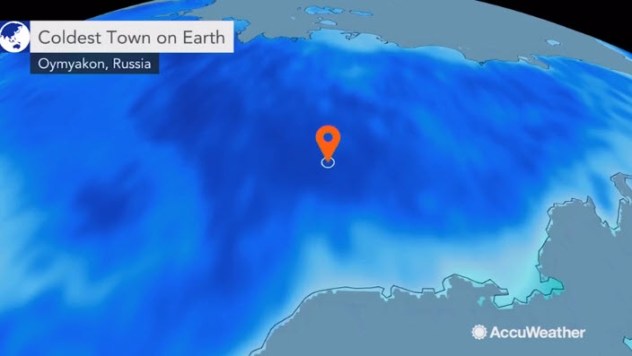 Oymyakon, Russia, which is widely considered the coldest inhabited place on Earth, is not living up to its reputation.

The town hit a maximum recorded temperature of 88.8 degrees Fahrenheit (31.6 degrees Celsius) on Tuesday, the hottest it has ever been in June. The last three days in Oymyakon have been similarly hot, with temperatures reaching 86 F (30 C). By Thursday, temperatures were only able to climb to 82 F (28 C).

AccuWeather Senior Meteorologist Jason Nicholls says that the weather will continue to cool off a bit, with observed high temperatures in the upper 70s on Friday, but that the heat will return over the weekend.

"It looks to turn warmer again on Saturday with highs around 86 F (30 C). Not quite as warm Sunday but still warm by Oymyakon standards, getting up to 82 F (28 C)," Nicholls said.

Located in the Sakha Republic of Russia, the town of about 500 residents typically endures frigid temperatures. According to The Siberian Times, the lowest officially recorded temperature in Oymyakon was 89.9 below zero F (67.7 below zero C) in 1933.

This past January, temperatures in Oymyakon plummeted to an extremely frigid -73 F, meaning temperatures in the city have varied by a whopping 161 degrees Fahrenheit this year.

Oymyakon is in a permafrost region, meaning that there is ground which continuously remains below 32 F (0 C). 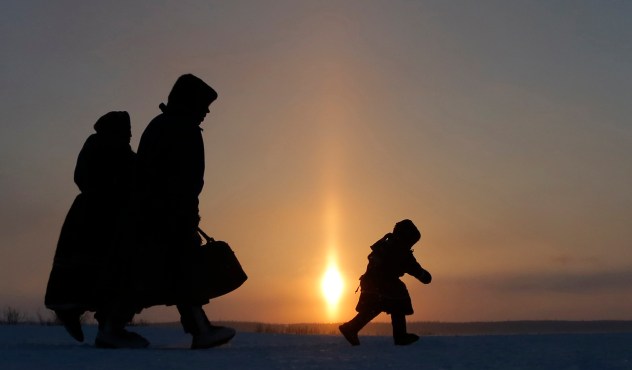 A Nenets family in northern Siberia walks across the region's frigid terrain. In a study published in 2019, scientists working on the Global Terrestrial Network for Permafrost say the world’s permafrost is getting warmer, with temperatures increasing by an average of 0.3 degrees Celsius (0.54 Fahrenheit) over a decade. (AP Photo/Dmitry Lovetsky, FILE)

The extreme winter climate of far northeastern Asia is also referred to as the "Pole of Cold," according to AccuWeather Senior Meteorologist Jim Andrews.

"The Siberian 'Pole of Cold' is located within the Sakha Republic, or Yakutia, in northeastern Asia," Andrews said. "In winter, it is the coldest inhabited area on Earth -- only the tops of the great Antarctica and Greenland ice sheets are colder."

In the summer, the temperature does rise, with the June average high hitting a respectable (but not hot) 68 F. The average low temperature dips back into the upper 30s, though.

Oymyakon is about 200 miles south of the Arctic Circle, a region many people assume is cold year-round, but the air there can get warm as recent thermometer readings demonstrate.

This past week, the Pacific Northwest also experienced all-time record heat. Portland shattered its daily high-temperature record three days in a row; the record currently stands at 116 F. In Canada, a new all-time high temperature was set in Lytton, British Columbia, where the mercury shot up to 121.1 F (49.5 C) on Tuesday, according to the BBC.

Moscow also experienced record heat this month. Just as summer officially arrived, so did a heat wave that sent temperatures soaring to levels not seen since 1901.