Dozens of boaters were enjoying a quiet afternoon at Brazil's idyllic Lake Furnas when a large chunk of the surrounding cliffside came loose, killing at least 10 people.

Disaster struck in the wake of rainy weather at a tourist attraction in southeastern Brazil on Saturday leaving at least 10 people dead and more than 30 injured.

Dozens of boaters were relaxing on Furnas Lake, in the Capitólio region of the state of Minas Gerais, on Saturday, when a large chunk of rock came loose from the surrounding canyon and then plunged into the water below.

The state governor of Minas Gerais, Romeu Zema, explained that heavy rains were the cause of the loosened rock at Furnas Lake. Brazil's National Institute of Meteorology issued red flag warnings across the state, citing the potential for more than 3.9 inches (100 mm) rainfall every day for four days, state media's Angecia Brasil told CNN.

Zema noted that officials were also taking precautions in other locations throughout the state that could be susceptible to damage.

Furnas Lake is normally a tranquil waterway, surrounded by a canyon of cliffs and a beautiful waterfall. 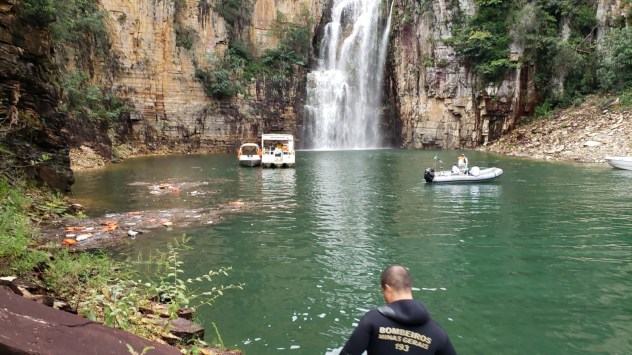 At first, just a few smaller rocks cracked and began tumbling into the water, according to onlooker Vitor Carvalho, who recounted what he saw at the tragedy to the Brazilian news organization O Tempo.

Then, without much warning, a massive wall of rock dislodged from the cliff face and tumbled down into the lake. Several boats could be seen on video speeding away from the area before the rock hit, but witnesses claimed that at least three speedboats were hit before the scene was then clouded with a wall of water.

Videos showed nearby sailors trying to warn the boats closer to the cliff of the unstable rock right before it fell.

Rovilson Teixeira, who has worked with speedboat transport for six years, told O Tempo that he has never seen anything like it happen in the region. “We are all stunned," Teixeira said. 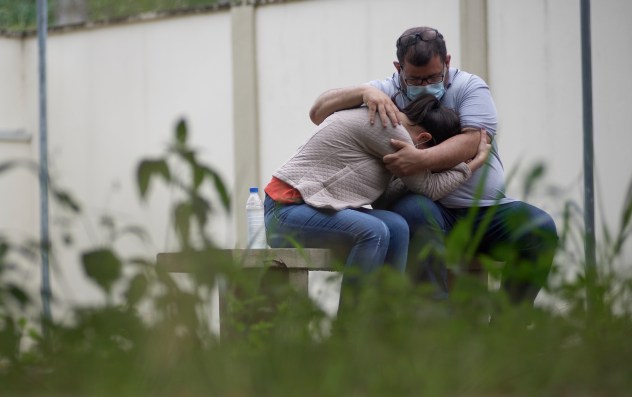 A couple embraces as they wait for information about missing relatives after a massive slab of rock broke away from a cliff and toppled onto pleasure boaters at Furnas reservoir on Saturday, killing at least seven people, near Capitolio city, Brazil, on Jan. 9, 2022. (AP Photo/Igor do Vale)

The Brazilian Navy was soon on the scene to help with rescue efforts.

The initial death toll rose to 10 on Sunday as search and rescue missions continued. The Minas Gerais Fire Department spokesman, Pedro Aihara, reported that at least 32 people were injured in the incident, all of whom were taken to area hospitals. Many have since been released.

"I stand in solidarity with the families at this difficult time," Zema wrote on Twitter. "We will continue to act to provide the necessary protection and support."

Flooding rainfall has been a problem across much of Brazil since late December. Flooding in the northeastern part of Brazil has been blamed for at least 20 deaths, prompting the country's government to send 200 million reais ($35.5 million) in disaster relief funds to the region. In the state of Para, in northern Brazil, communities were also flooded, forcing residents to travel by boat, according to Reuters.