This satellite video shows dust from the Sahara Desert in Africa traveling the Atlantic Ocean and reaching the Caribbean islands on June 15.

Radiant sunsets are in the forecast for parts of Florida thanks in part to a weather pattern currently underway across another continent.

Dust kicked up across the Sahara Desert and carried by trade winds has been pouring off the coast of Africa in recent weeks and floating clear across the Atlantic Ocean toward the Caribbean and Florida. The dusty air is brought about by a weather pattern known as the African easterly jet, which consists of strong low to midlevel winds in the atmosphere over central Africa.

“There are a lot of thunderstorms across central and southwest Africa, indicating a very active east African jet which should bring more robust tropical waves into the Atlantic during the next couple of weeks,” AccuWeather Hurricane Expert Dan Kottlowski said. “These features will bring more dust, but we can’t tell at this point whether there will be any mega dust outbreaks like we saw last year. We will just have to wait and watch.”

While the current dust plume over the Atlantic isn’t nearly as massive as the record cloud that was captured on satellite last June, which was nicknamed the “Godzilla dust cloud,” it will still make its presence felt.

“There will be enhanced sunsets in the tropics this time of the year through the rest of June and into early August during the height of the 'dust season,' Kottlowski said, adding that it looks like a normal dust pattern for mid-June. It could also reduce air quality in some areas, he added. 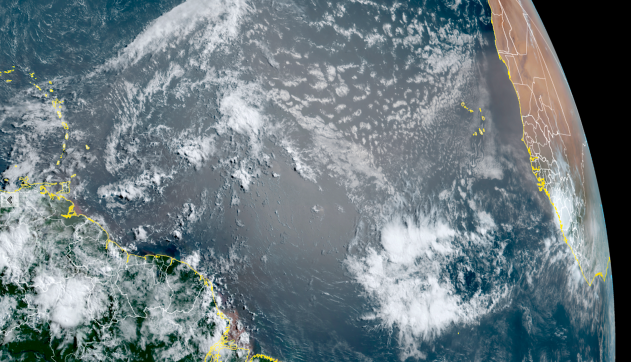 A cloud of dust is highlighted on this still image from a satellite video produced by NOAA and distrubuted by AFP.

The Associated Press, citing the National Weather Service in Miami, reported that some dust could be in the South Florida area on Friday or Saturday.

Health experts say that the dust could be troublesome for those with allergies and may even produce symptoms similar to COVID-19.

As of Wednesday afternoon, June 16, parts of southeastern Florida were already dealing with poor air quality. Across much of the state, air quality ranged from fair to excellent.

Satellite video produced by the National Oceanic and Atmospheric Administration and distributed by AFP showed the dust cloud sweeping over the ocean from June 12-14.

The dust can transform normally blue skies into a milky, hazy color. According to NOAA, "Sunsets and sunrises take on more yellow and reddish hues because the low-angle sunlight passes through more of the atmosphere before it reaches your eyes. A heavy load of dust in the atmosphere can enhance this effect, leading to longer-lasting, duskier colors that cause vivid sunsets and sunrises." 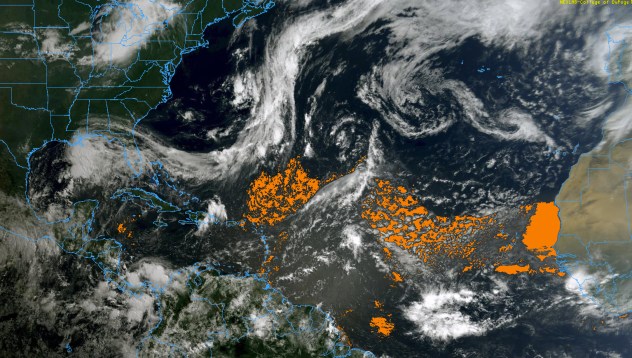 The hazy skies won’t only enhance sunsets, but also will help limit tropical development across normal breeding areas over the Atlantic and Caribbean. Forecasters say the dust can suppress the number of showers and thunderstorms that are necessary for tropical development in these areas.

The amount of dust in the Atlantic typically becomes less prevalent during the height of the hurricane season from the middle of August to the latter portions of October, thus setting up more opportunities for tropical systems to develop.

The African easterly jet was active through the hurricane season last year and is expected to be similarly active this year, according to Kottlowski.

“What happens is the rainfall occurring in southwest Africa causes the ground to be less dry and so you have less dry land for dust to form,” he explained. “Farther north the land remains very dry and the dust comes from these desert areas. So, dust continues to flow out of Africa with each tropical wave but not as much due to less dust being picked up.”

Last year’s monstrous dust cloud was considered to be one of the biggest, if not the biggest, in 50 years. The dust brought hazy skies and poor air quality to much of the southern U.S. and was even visible from the International Space Station.

We flew over this Saharan dust plume today in the west central Atlantic. Amazing how large an area it covers! pic.twitter.com/JVGyo8LAXI

Over the course of last summer, nearly 24 tons of dust from the Sahara Desert were carried by winds to North and South America, with the Caribbean islands being hit particularly hard, according to NASA.

Skies went dark: Historians pinpoint the very ‘worst year’ ever to be alive
Officer was first on scene of one of the worst traffic accidents in US history
24,000-year-old animal found alive, well and ready to reproduce