The skies over Bridgetown, Barbados, were dark and dusty on June 22, as dust from the Sahara Desert in Africa continued to move through the Western Hemisphere.

The monstrous size of the Saharan dust cloud trekking from Africa to the Gulf Coast has made meteorologists' heads turn and has stirred up conversation on how this year’s health impacts from the plume could be more concerning than others in the past.

Over the past week, this vast expanse of dust, known as the Saharan Air Layer (SAL), has been called the "Godzilla dust cloud," as well as the "most significant event in the past 50 years," by some experts, according to The Associated Press. By Wednesday afternoon, the leading edge of the dust plume had invaded the airspace over the Gulf of Mexico, satellite imagery showed. 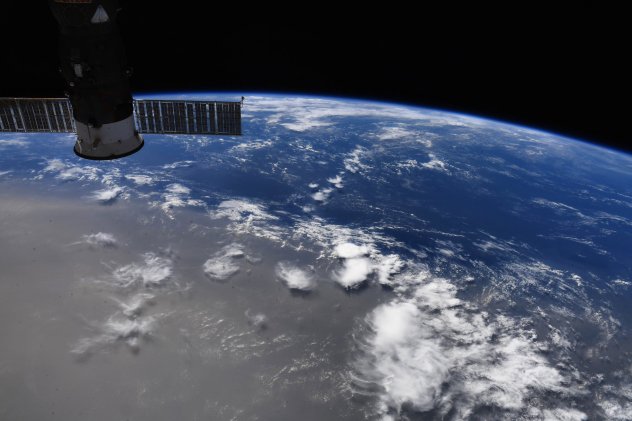 A view of the Saharan Air Layer over the Atlantic Ocean from the International Space Station on June 21, 2020. (Twitter/@Astro_Doug)

Satellites show two areas of concentration with the dust as the plume stretches from continent to continent. The first concentration now clouds the Caribbean, more than a week after a thunderstorm complex that had moved across western Africa kicked up the dust.

"Dust has been flowing off the coast of Africa for several weeks now, which is not uncommon," AccuWeather Senior Meteorologist and lead hurricane expert Dan Kottlowski said. "But the extent and concentration of dust currently in the Caribbean is by far very impressive."

Satellite imagery of the dust plume from the Sahara trekking across the Atlantic toward the Americas on Wednesday, June 24, 2020. (NOAA/GOES16)

"The depth of the dust, as measured in various places, suggests that this is one of the most concentrated areas of dust we have seen in the past several years," Kottlowski said, although he acknowledged that records of dust concentrations are not well established.

The bulk of the first concentration of dust reached Puerto Rico and the U.S. Virgin Islands on Monday, not just clouding the sky but turning it a milky white.

Visibility at the airport on St. Croix in the U.S. Virgin Islands dropped to 3 miles and was limited to 5 miles in San Juan, Puerto Rico. In past years, the SAL plumes have allowed 10 or more miles of visibility at the surface, according to Gabriel Lorejo, a meteorologist at the National Weather Service in San Juan.

8 am: Preliminary measurements from #SaharanDust in #PuertoRico are between 350-380 ug/m3 (PM10) and AQI estimated 173-237: VERY UNHEALTHY 🔴. According to Dr. Olga Mayol, @UPR_Oficial this is a historic event in PR, unseen in 50-60 years. Image from #Villalba 📷 Osvaldo Burgos. pic.twitter.com/oVAyOOViCa

"We have many models that indicate the highest dust concentration is from around 5,000 feet all the way down to the surface. It’s pretty extreme," Lorejo told The Washington Post.

The aerosol optical depth, a measurement commonly used to estimate the amount of particulate matter in the air, was as high as 2 on Monday, a level not seen there during June in 15 years of record-keeping, Dr. Olga Mayo, an atmospheric chemist at the University of Puerto Rico, told The Washington Post.

"This is probably the worst air quality caused by Saharan dust in recent memory," Kottlowski said. "Dust particles are like any other pollution such as smoke. Low-level dust is usually a very short-term issue such as when one experiences dust in a dust storm. But this is different because it's not local dust, it's dust that originated at least 4,000 miles away and has been falling out to the ground since then."

Indeed, a look at the air quality in Negril, Jamaica, on the island's west coast, provided by Plume Labs showed that conditions were "very unhealthy" as the Saharan dust enveloped the atmosphere. AccuWeather and Plume Labs have a partnership that allows users to monitor the realtime air quality in a given location from the AccuWeather website or mobile app.

Air quality in Puerto Rico was fair as of Wednesday morning, according to the data from Plume Labs. But the SAL has coated some cars left outside in a fine layer of dust early in the week. Ada Monzon, chief broadcast meteorologist at WAPA-TV in Puerto Rico, has been following the dust plume as it's moved over the Atlantic toward the Caribbean. She posted photos on Twitter sent to her by viewers showing how outdoor surfaces had been covered in a thin film of dust.

A thin layer of #Saharandust is in the surface of our cars, exterior tables, fans, etc. This extraordinary dense SAL was lifted from the Saharan desert and traveled to the Caribbean. The red color comes from the iron minerals that travel in this layer. pic.twitter.com/DRLP13kXRp

The reddish color of the dust indicates the iron contained in it. When this iron is deposited over a large body of water, it can promote the growth of algae blooms, according to Kottlowski.

Meteorologists at NOAA on Tuesday posted animated satellite imagery on Twitter showing the huge dust plume moving across the Atlantic over a five-day period. The images, seen below, were captured by the GOES-16 satellite.

#SATELLITE SPOTLIGHT: This #SaharanAirLayer (#SAL) tracking animation shows how the plume of #dust and #sand from the #SaharaDesert has moved westward over the last 5 days. Areas of red and pink represent the dry, dusty air as seen from @NOAA's #GOES16 🛰️ pic.twitter.com/mh7gULXFSU

"Extensive dust extends west to the eastern Yucatan Peninsula and Belize," Kottlowski said. "However, an upper-level disturbance that will cause heavy and perhaps flooding rainfall over East Texas the next two to three days will halt the westward progression of dust for a time."

The system is forecast to lift out to the northeast between Thursday and Friday, opening the door for more concentrated dust to fill the skies over East Texas Friday or Friday night into Saturday. Like it has in the Caribbean, the dust is expected to bring reduced visibility and poor air quality from eastern Texas to Louisiana.

"Those sensitive to poor air quality should pay close attention to local officials advising the public on air quality," Kottlowski said. "Eventually, the dust will flow up into other Gulf Coast states around the western then northern periphery of an area of high pressure nosing into the northern Gulf of Mexico."

Residents in the southern areas of Mississippi, Alabama, Georgia and parts of Florida are likely to see hazy skies and deal with a drop in air quality this weekend into early next week. 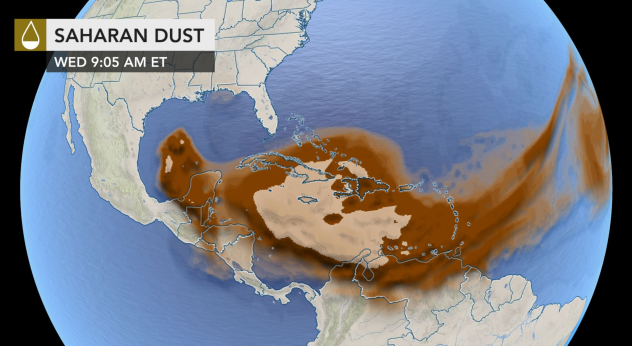 A look at where the Saharan Air Layer (SAL) was moving across the Atlantic Ocean toward the southern United States on Wednesday, June 24, 2020.

As the dust moves westward, some of the more concentrated dust will precipitate out or spread out, becoming less concentrated, according to Kottlowski. With the diminishing of dust levels, the impacts most likely won’t be as dramatic as what has been seen in Puerto Rico.

"However, it will still be unusual, and people will notice some haze and a milky-looking sky with little or no blue sky visible for most of Friday, Saturday and Sunday over East Texas," Kottlowski said. 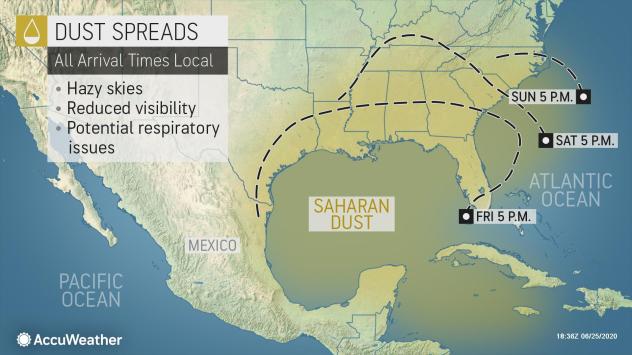 The concentration of dust this year will most likely continue to cause poor air quality in the Gulf Coast, coming at a time with high concerns over COVID-19, which affects the respiratory system.

"Air quality could also drop to moderate to unhealthy this weekend over South and East Texas due to the dust," Kottlowski said. "So, people with respiratory issues should not spend any long periods of time outdoors. Some people with severe respiratory conditions may just want to stay indoors."

The hospitals in Texas are currently at a breaking point. In Houston, the Texas Children’s Hospital has been admitting adult patients to help ease the strain on other facilities. As of Tuesday, the state had 118,093 confirmed cases, placing it as the fifth state with the most cases, according to data from Johns Hopkins University. The state's death toll as of Wednesday stood at 2,236.