The new week is bringing a renewed flood threat to a swath of the central United States as storms blitz across the battleground between hot and humid air and cooler conditions.

The Heartland of the United States has endured a multitude of weather events in recent weeks, ranging from the heavy rain and major flooding that occurred in the St. Louis area last month to the ongoing drought across portions of the High Plains. This week, however, AccuWeather meteorologists say a slow-moving system will allow clusters of thunderstorms to develop, bringing swaths of heavy rain and localized flooding to the region.

Heavy thunderstorms closed out the weekend across eastern Colorado, eastern Wyoming and Nebraska as the storm system left the Rocky Mountains and began to track across the Plains. As the system continues to slide southeastward, it will pull in moisture from the Gulf of Mexico, providing the fuel necessary for drenching thunderstorms.

The zone of storms is occurring between the soaring temperatures in the Northwest and the cooler air bringing a taste of fall to the East Coast.

"A stationary front will divide the U.S. between cool air across the Northeast and an area of higher heat and humidity across the southern Plains. This battleground will become the focus for rounds of heavy rainfall this week," AccuWeather Senior Meteorologist Mike LeSeney explained. 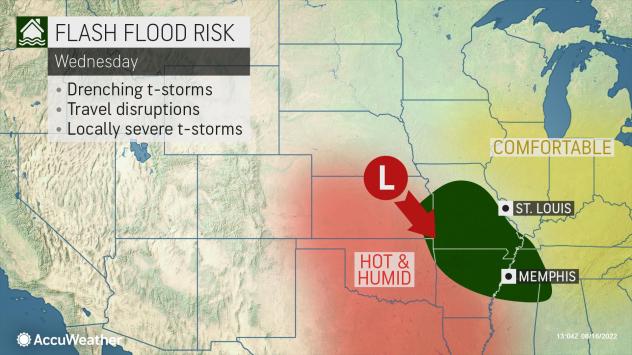 As the batch of downpours and thunderstorms shifts southward, the heaviest rain will focus on portions of southern Missouri, northeastern Arkansas, southwestern Kentucky and western and middle Tennessee into Wednesday morning. In this area, multiple rounds of heavy thunderstorms can move over the same locations in a process known as "training," which can rapidly turn manageable rainfall totals into a threat of flooding. In extreme cases, training thunderstorms can unleash a month's worth of rain in just a few hours.

Through early Wednesday, a general 2 to 4 inches of rain is likely in the places that get heavy storms; however, some spots, such as the Ozarks in central and southern Missouri, may receive locally higher totals. Given the terrain of the region, any runoff will more easily funnel into narrow streams and valleys, making this an area to watch especially closely over the coming days.

Conditions may also vary sharply over short distances, with only a few miles separating light rain from a dangerous flash flood risk. Even if a specific place receives only light rain, runoff from nearby storms can cause water levels in rivers and streams to rise quickly.

Those on the road during this heavy rainfall are reminded never to drive through floodwaters, as the water depth is often greater than it may appear. A large portion of flooding deaths occur in vehicles and avoiding flooded roads while driving is always the safest option. 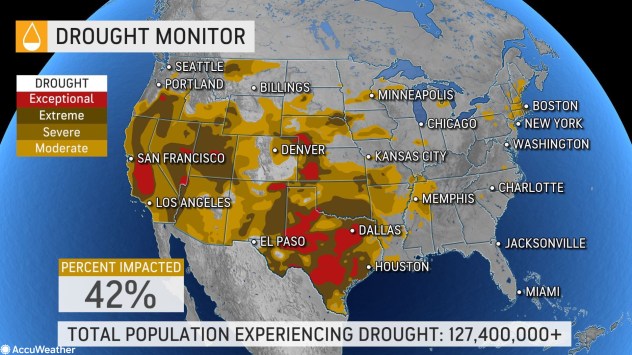 Despite the issues that may arise from flooding, many areas of the Plains will benefit from any rain that falls this week. According to the U.S. Drought Monitor, nearly 40% of Missouri is experiencing some level of drought conditions. That number is nearly twice as high in Arkansas where drought conditions are present in 73% of the state. While too much rain at once can quickly cause flooding, any rain will be beneficial for agriculture in the region.

The bulk of the rain is predicted to miss the areas of the Plains experiencing the worst of the drought conditions, including Texas, Oklahoma and western Kansas. Some communities can be hit with gusty winds and a brief torrential downpour.

Those seeking drier weather may be in luck as the week draws to a close. While occasional showers and storms may dot the Central U.S., the chance of any widespread heavy rain will drop toward the end of the work week, with the system sliding quickly off to the east.

The main focus of showers and thunderstorms with the potential for training downpours will extend along portions of the Interstate 10 and 20 corridors from Louisiana to South Carolina, Georgia and northern Florida from Thursday to Friday. 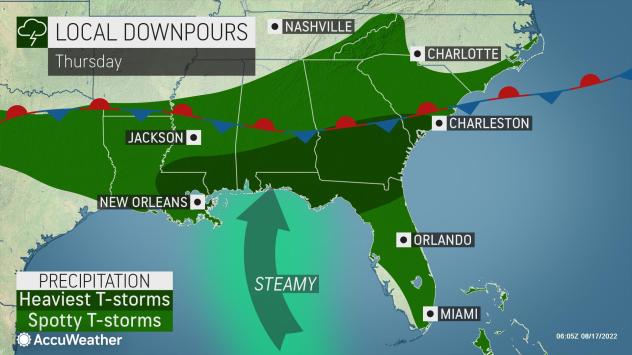 Parts of this zone have been hit with excessive rain in recent weeks and could be more prone to flooding than average during the middle of August.