By Wednesday, light rain was still falling in the St. Louis area as residents began to take stock of the damage caused historic rainfall a day earlier.

Over a foot of rain fell over parts of St. Louis, causing deadly flash flooding in the city.

Cleanup efforts were slowly getting underway around the waterlogged city, and service delays were reported on the city’s MetroLink rail service. At least 400 people were rescued by fire departments in St. Charles County and St. Louis County on Tuesday, according to the St. Louis Post-Dispatch.

One fatality due to the fast-rising floodwaters was confirmed by St. Louis city officials shortly before noon local time Tuesday. The city's fire chief, Dennis Jenkerson, said a car was submerged in about 8.5 feet of water in a low-lying area of the city and a man's body was later recovered from the car. The fire department responded to about 70 calls for rescue or assistance throughout the morning, Jenkerson said.

The victim was reportedly an unidentified man in his 60s, according to the Post-Dispatch. 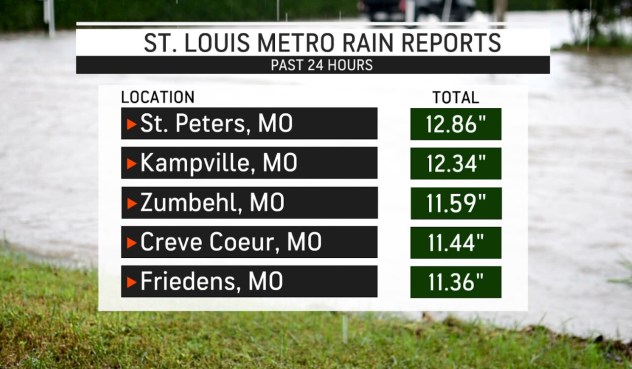 "We want to ensure that our communities have every resource available to respond and protect Missourians," Parson said in a Tuesday release.

St. Louis shattered its all-time daily rainfall record as nearly 9 inches of rain fell on Tuesday, with most of the precipitation falling within a five-hour time frame. This broke the previous record of 6.85 inches set 107 years ago as the moisture from what was left of the Galveston Hurricane of 1915 pounded the city on Aug. 20 of that year.

Within 24 hours, St. Louis picked up 9.04 inches of rain, which not only set a new all-time 24-hour rainfall total, but it also surpassed the normal amount of rain for all of July and August combined --7.31 inches — and about a quarter of the normal annual rainfall. Nearby locations, such as the suburb of St. Peters, Missouri, were inundated by more than a foot of rain.

The National Weather Service (NWS) office in St. Louis noted the hyperlocal nature of the deluge, tweeting out that even as some sites shattered records, rainfall totals “varied immensely” and other areas picked up only a trace of rain.

The excessive rainfall event unfolded as several rounds of thunderstorms trained — or repeatedly moved over — the I-70 corridor in Missouri and the I-64 corridor in Illinois, according to the NWS.

Local officials urged people to avoid travel as high water clogged roadways throughout the region. Video footage showed floodwaters submerging portions of Interstate 70, forcing the closure of that highway in both directions ahead of the typically bustling morning commute. Closures were also reported on I-64, I-270 and U.S. Route 61.

The St. Louis Fire Department responded to approximately 18 homes that were experiencing substantial flooding with trapped occupants. Six people and six dogs were rescued via boat, with 15 other people choosing to shelter in place. Power outages had eclipsed 20,000 in the region as of 10 a.m. CDT Tuesday, with power restored to many by provider Ameren Missouri in the afternoon after reporting "significant damage" to various area substations and electrical equipment.

As the waters receded as Tuesday progressed, Jenkerson said there were reports of partial roof collapses on buildings, including several vacant properties, that were stressed by the weight of the water.

St. Louis resident Tony Nipert shared photos from the city's Skinker DeBaliviere neighborhood, located northwest of downtown. Nipert told AccuWeather that he had never seen flooding like this in the four years he lived in the area. The nearby Forest Park DeBaliviere Metrolink train station was completely flooded, according to pictures he shared on Twitter.

"I woke up to let my dogs out this morning and could see the [train] tracks flooded like a river from my sunroom," he told AccuWeather. "This is not normal," he noted on his Twitter account.

“Her backyard is a whole lake at this point, smh,” Perry wrote on Twitter.

“The floodwaters were quick and sudden, like nothing I’ve ever experienced before in my life. The rain was literally non-stop pouring down for all hours of the night pouring into this morning,” Perry told AccuWeather.

“It was extremely horrific watching our whole basement and garage flood, losing several sentimental items including an electric guitar from my late father," she added. Her father died earlier this year and, she said, his car is one of those "seen submerged in our backyard.”

In nearby Saint Charles, Missouri, city officials said a pedestrian bridge collapsed due to erosion caused by the heavy rain.

At one point during the early morning hours of Tuesday, nearly 1 million people within the densely populated metro area were within a flash flooding emergency -- a National Weather Service alert withheld for only the most extreme flooding events.

The Dardenne Creek at St. Peters rose dramatically in the early morning hours of Tuesday. Waters rose 7.8 feet between 2 a.m. and 3 a.m., local time, and nearly 9 inches within 5 minutes during that window, according to AccuWeather meteorologist and Senior Weather Editor Jesse Ferrell, who pointed to the flash flooding incident as an example of how quickly waters can rise in an excessive rainfall event like the one that unfolded in the St. Louis area.

AccuWeather meteorologists say additional rounds of intense rainfall are expected to keep flash flood dangers high from Kansas and Missouri to Virginia through the week.