Time-lapse footage shows the Red Fire, which was started by a lightning strike, burning California’s Yosemite National Park on Aug. 12.

Summertime heat is set to build across the West as a gradual shift in the weather pattern occurs this week. Forecasters say temperatures will steadily climb between 10 and 18 degrees Fahrenheit above average in the upcoming days in cities such as Seattle, Portland and Medford, Oregon.

"Much like recent hot stretches, this will be caused by a large bulge in the jet stream, acting to keep the storm track lifted north and allowing temperatures to surge in the coming days," explained AccuWeather Meteorologist Andrew Johnson-Levine.

The influx of hot weather will expand across Northwest states like Washington, Oregon, Idaho and Montana; however, the heat will also grip portions of Central California and Nevada, throughout the week.

An expansive swath of excessive heat alerts have been issued in the Pacific states, stretching from California's Central Valley to the Canadian border. The alerts cover numerous counties through the latter half of the week. 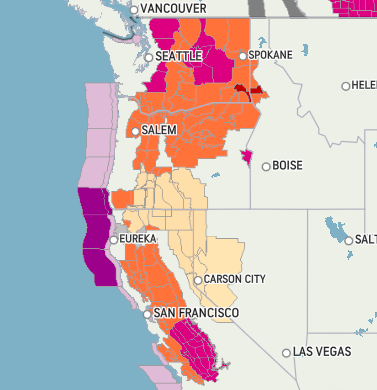 Head advisories and warnings (shown in orange and red, respectively) were issued across numerous counties from central California to Washington for this week.

Temperatures are expected to peak around midweek across many locations in north-central California, Nevada and Oregon, before gradually sinking closer to average. Farther north into Washington state, the heat will likely persist into the weekend. AccuWeather meteorologists say that the upper-level pattern across the country's eastern half will play a prominent role in how many days the heat lingers over the West.

"The dip in the jet stream and cooler temperatures in the eastern U.S. will act as a roadblock in the atmosphere, which should keep the hot conditions around the West for much of the week," stated Johnson-Levine.

The hottest regions outside Central California are likely to be southern Oregon, the Willamette Valley and areas east of the Washington Cascades. By Wednesday, temperatures are forecast to climb to near or over 100 F across most of these locations. Hot conditions will slowly retreat from the Willamette Valley on Thursday, but will continue to grip areas such as Medford, Oregon, and Kennewick, Washington, through late week. 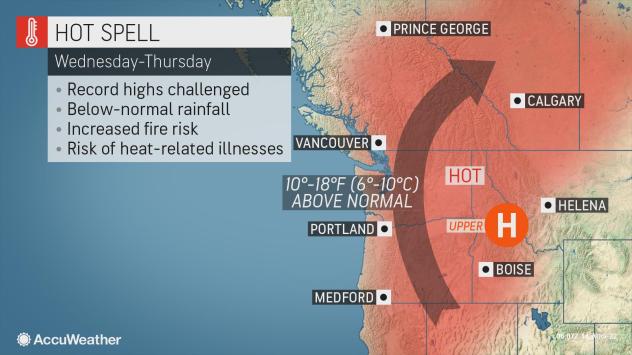 Outdoor plans and activities may need to be altered as the hot conditions set in across the West to limit the risk of heat-induced illnesses. Residents are urged to drink plenty of water and utilize air conditioning if it is available.

For those without access to air conditioning, experts recommend wearing breathable, light-colored fabrics and cold washrags on your neck and wrists. Some tips to keep your home cooler include keeping doors shut and closing curtains and blinds. 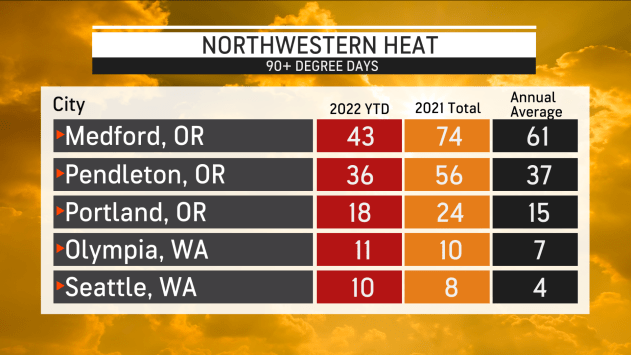 By mid- to late week, some moisture from the North American monsoon is expected to push northward this week.

"While the monsoon is bringing heavy rain and flooding to the Southwest, areas farther north will have a bit less moisture to work with, meaning less rain from any thunderstorms that form. This may lead to dry thunderstorms, which can quickly start wildfires when lightning strikes dry vegetation," explained Johnson-Levine.

Wildfires have peppered the dry Northwest landscape over the last couple of weeks. The most expansive fire still ongoing is the Moose Fire in central Idaho. As of early Monday morning, the Moose Fire had burned over 78,000 acres and was at 34% containment.

Although the peak of the heat is expected around midweek, conditions will likely remain hot through at least the weekend. However, an uptick in rainfall chances may provide some relief to the Northeast by the start of the following week.