After days of persistent rain and, in some instances, severe weather, AccuWeather meteorologists say that a change is on the way in the central and southern Plains just in time for the holiday weekend.

Although severe weather was primarily to the east of the Plains on Wednesday, persistent rain continued across part of the region. Southeastern Nebraska, much of Kansas and northern and western Oklahoma were particularly wet. Wichita, Kansas, has measured 4.81 inches of rain so far this week while stuck in a wet pattern, close to the 5.17 inches that typically falls in the city in all of May. 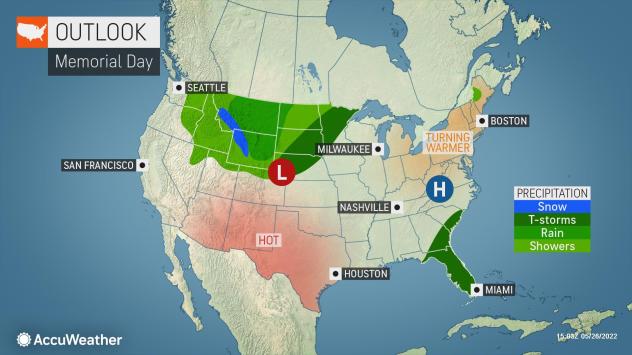 Rain was fairly stationary through midweek as a pocket of cold air in the upper atmosphere was stuck over the region, as it was detached from the jet stream. When this happens, systems move along very slowly.

This pattern will finally break by the end of the week, ushering in much drier conditions.

"Like a massive atmospheric teeter-totter, the pocket of cold air will move away to the east and will allow the jet stream to move northward across the Great Plains late this week," explained AccuWeather Senior Meteorologist Mike LeSeney. 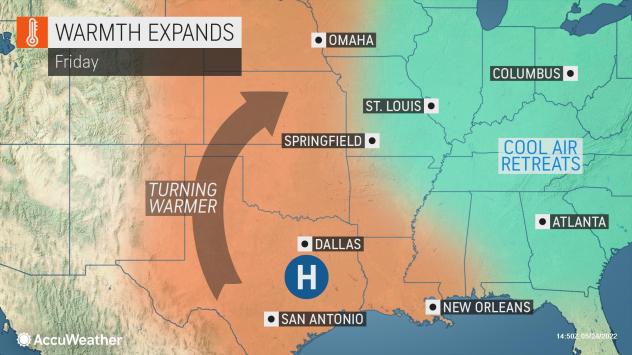 On Wednesday, the temperature reached only 56 degrees Fahrenheit in Wichita, which set a new record for the lowest high temperature for May 25. The mercury got warmer on Thursday with a high of 69 F which is forecast to be followed by highs close to 90 F over the weekend. Normally, Wichita is in the lower 80s in late May.

Oklahoma City was also unusually chilly on Wednesday due to the clouds and rain, reaching only 59 degrees. This tied the record for the lowest high temperature on the date. The mercury recovered to 76 on Thursday. Like in Wichita, highs could flirt with the 90-degree mark over Memorial Day weekend. Temperatures in the lower to middle 80s are typical for central Oklahoma during the final week of May.

Even though temperatures will be on the rise, humidity is expected to remain relatively low through Friday. With high pressure centered over Texas, the air coming from the south will travel over land for a long distance. This will allow the air to dry out, at least initially.

By the weekend, the high pressure will shift and pull in more moisture from the Gulf of Mexico, leading to an uptick in humidity across the southern Plains. It will be a case of weather whiplash after the recent rain and temperatures that were around 25 degrees below normal for daytime highs. 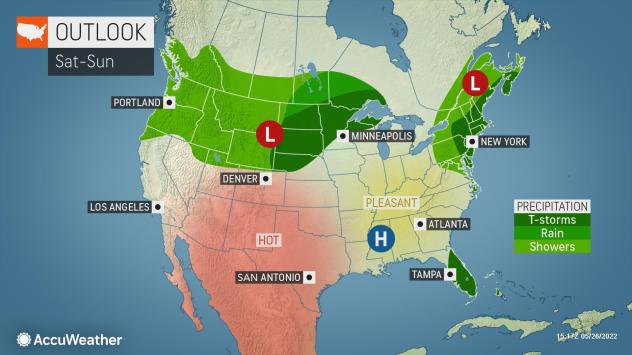 The building warmth will not just be limited to the southern Plains.

"Warmth will surge northward from South Texas all the way to north of the Canadian border," said LeSeney.

However, neither temperatures nor humidity are expected to be quite as high in the Dakotas and southern Canada as they will be farther to the south in Kansas, Oklahoma and Texas.

Temperatures in the northern Plains will also be capped by a storm system moving across the region, which will deliver rain and thunderstorms to the region over the extended Memorial Day weekend.