Two of the most popular planets in the night sky will shine together over the extended weekend -- a warmup for an even more impressive planetary showcase in June.

Mars and Jupiter will meet for a conjunction over Memorial Day weekend. The best night to catch this event is the early morning of May 29. Add this to your bucket list while celebrating the holiday!

The night sky has featured plenty of intriguing events throughout May, ranging from a meteor shower sparked by Halley's Comet to the first total lunar eclipse of 2022, and one more fascinating event is about to unfold before the month comes to a close.

Mars and Jupiter will make an exceptionally close encounter in the pre-dawn sky during the extended Memorial Day weekend, an astronomical event known as a conjunction.

Like many of the marquee astronomical events throughout 2022, a telescope or pair of binoculars is not needed, just a cloud-free sky and the motivation to wake up and head outside before the break of dawn.

The duo's close encounter will be a three-day event, so stargazers can pick the morning with the best weather forecast for a chance to see the conjunction. However, Mars and Jupiter will appear the closest on Sunday, May 29.

Folks who are awake and have favorable weather can spot the planets about 60 to 90 minutes before sunrise, local time, in the eastern sky. Jupiter will be the brighter of the two planets with Mars appearing just below it.

Early risers can also spot Venus, which will appear lower in the eastern sky, and Saturn, which can be spotted higher in the southeastern sky. 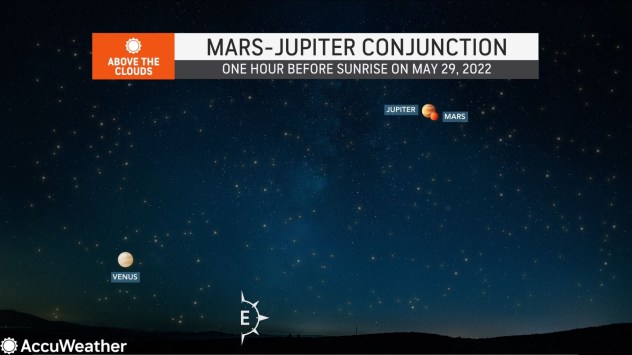 While the two planets may appear close to one another in the sky, in reality, they are hundreds of millions of miles apart. It is just from the perspective of the Earth that they appear like a tight-knit celestial couple. 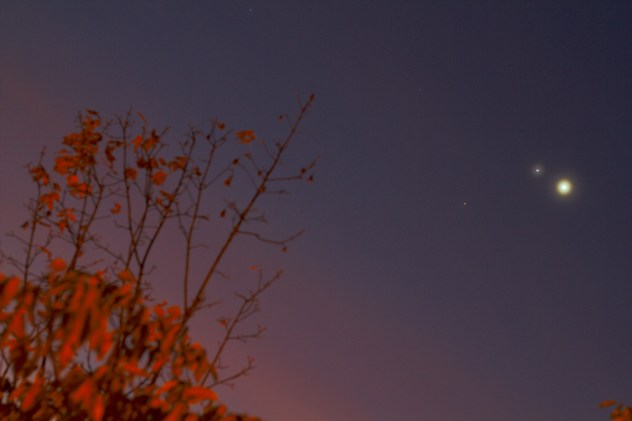 Jupiter, Mars and Venus bunched together in the sky on Oct. 25, 2015. (Radoslaw Ziomber)

Anyone who misses this planetary conjunction will have to wait until Aug. 14, 2024, for the next chance to see Mars and Jupiter converge.

Mars and Jupiter will continue to be prominent features in the early morning sky into June, but they will gradually appear farther and farther apart each morning following the late-May conjunction.

The best pre-dawn planetary show of the year is right around the corner with Mercury, Venus, Mars, Jupiter and Saturn aligning in the days following the summer solstice, which occurs on June 21.

The crescent moon will also be falling in line with the five planets on the morning of June 24, about one hour before sunrise, making it the best morning to enjoy the alignment.

However, with late June featuring some of the earliest sunrises of the entire year, it may mean stepping outside and gazing at the sky before 5 a.m., local time, to see the impressive planetary showcase.