After high heat scorches the Northwest, relief is on the way

The first weekend of summer will feature dry and warm weather across the Pacific Northwest following a long spell of cool conditions.

After cooler-than-normal weather held in place in the Pacific Northwest during the spring months, the first taste of summer arrived on Friday and Saturday. While the heat has not been as intense as what was felt during the record-shattering heat last year, high temperatures over 15 degrees Fahrenheit above average have been recorded over the past couple of days. AccuWeather forecasters say the heat will continue into early week, but relief will quickly follow.

The increase in heat followed a persistent cool stretch for much of the spring months. In May, Seattle's temperature averaged nearly 5 degrees below average, with below-normal temperatures widespread to the west of the Cascades. A dip in the jet stream had brought cloudy and wet weather to the region, keeping temperatures in check.

Since then, the pattern has quickly changed as the jet stream bulged northward, keeping the cooling clouds and rain north of the area. Into Monday, the resulting heat is likely to reach a sweltering peak, especially east of the Cascades.

Portland was among the hottest spots on Sunday, with a high of 99, falling just shy of the century mark. Monday was not quite as hot, but still reached a high of 96 in the late afternoon hours. Seattle reached 90 degrees on Sunday and made a repeat run on Monday by spiking to 91 degrees, which is the warmest weather experienced so far this year in the city.

Farther south, high temperatures were even more extreme. Redding, California, has reached 100 F for six straight days, and continued the pattern for a seventh straight sweltering day Monday, reaching a high of 104. Average highs for the city this time of year are in the mid-90s.

East of the Cascades, heat also scorched much of the interior Northwest. In Boise, Idaho, Monday's high of 104 was the city's first time this year in the triple digits. Average highs for Boise in late June are in the mid-80s. 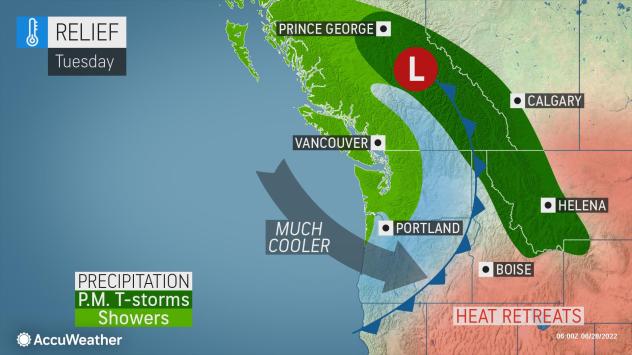 By the time Tuesday rolls around, a quick change to cooler weather is in the cards. Some spots will have high temperatures plunge over 20 degrees from Monday to Tuesday. In Seattle, highs will struggle to get to 70 on Tuesday, before being held in the mid-60s on Wednesday. Portland will be held in the mid- to upper 70s both days.

"As an area of low pressure builds in from the north on Tuesday and Wednesday, the jet stream will quickly kick southward and allow cooler air to return to the Northwest. Even though most rain will stay confined to Canada and the immediate coastline, the change will be quite noticeable," Sadvary explained.

Heading into the second half of the week, signs indicate that the cooldown may stick around. High temperatures near or perhaps slightly below normal are likely, with heat unlikely to return to abnormally hot levels in the Pacific Northwest.

Tropical depression could form in southwestern Gulf of Mexico