Monsoons are much more than heavy rains and flash flooding. AccuWeather’s Lincoln Riddle has the details on these seasonal shifts in wind direction that define life in the regions where they occur.

Recently, many in the Southwest have seen showers and thunderstorms slide through the area. Forecasters say that more of the same is in the forecast. While the rain will help dent the ongoing drought and keep wildfire concerns at bay, too much rain at once can lead to the opposite problem, with flash flooding a possibility.

For most in the Desert Southwest, the weather conditions in May and June could not be more different. In Albuquerque, New Mexico, no measurable rainfall fell during May. But in June, the North American monsoon allowed tropical moisture to stream northward and bring rounds of rain. A total of 1.47 inches of rain, over 250 percent of the normal for the month, has fallen through June 25.

A similar difference was seen in Flagstaff, Arizona. No measurable rain fell in the Arizona city in May, while a near-average 0.40 of an inch of rain through the first 25 days of June. Most of this rain has fallen in the past week.

More rainfall in the form of monsoon-driven showers and storms can be expected through Monday.

Albuquerque, Flagstaff and all the way northeastward to Colorado Springs, Colorado, may see their rainfall totals for the month rise even more into early week.

Hot and dry conditions have been more persistent in cities such as Phoenix and Tucson, Arizona, which have largely missed out on the rainfall so far; however, it's possible some spotty thunderstorms could occur in these cities through early this week. On Saturday, Phoenix recorded its most rainfall so far this monsoon season with 0.13 of an inch of rain. 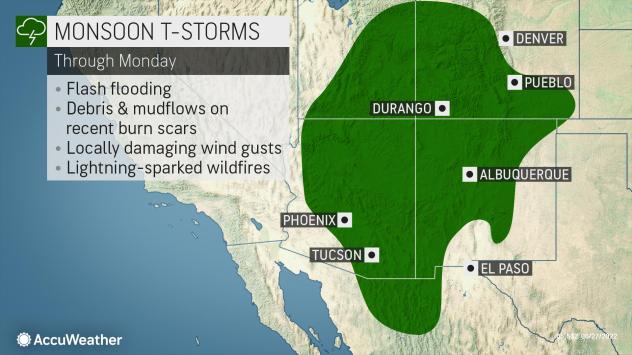 As much as an inch of rain could fall across much of Arizona and New Mexico through Monday as monsoon-driven rainfall continues, in some places doubling the amount of rain that has fallen so far in June. As is normally the case with monsoonal thunderstorms, wet weather is likely to be most widespread in the afternoon and evening hours.

Any rain that continues in the Southwest will be highly beneficial given the ongoing drought situation, which has caused area reservoirs to fall to historically low levels. Despite the recent rain, little has changed regarding the severity of the drought.

According to the U.S. Drought Monitor, 98 percent of Arizona is in some stage of drought. In New Mexico, the entire state is experiencing drought conditions, with 52 percent in exceptional drought, the most severe category. With such a major lack of water, monsoon-driven rainfall will need to be persistent to lessen the drought significantly.

While the drought may not improve quickly, recent rain has helped slow the spread of wildfires in the Southwest. While this spring saw historic and destructive wildfires in New Mexico, rounds of moisture will keep the wildfire threat at bay for the foreseeable future.

However, while the rain will be beneficial, too much of a good thing can lead to a different set of problems. As heavy rain may fall on rugged terrain, large amounts of water may be funneled into narrow valleys and streams, creating a threat of flash flooding.

"Even in spots that may not see heavy rainfall, flooding can still occur from a storm that is many miles away," AccuWeather Meteorologist Adam Sadvary cautioned.

Any flood threat will be locally higher where wildfire burn scars are present. With a lack of vegetation in these areas, rainwater can more quickly flow downhill, leading to more rapid flooding.

Another danger with the monsoonal thunderstorms is the risk of lightning. Should a bolt of lightning strike some dry vegetation, it could spark a new wildfire. Thunderstorms can also bring stronger and quickly changing winds, which can make containing any existing or new wildfires difficult.

While there is the potential for a drier day or two this week, the pattern is likely to favor a wetter pattern into early July. The persistent chance of rainfall could help bring some improvement in the drought.

Phoenix turns to ‘cool corridors’ to combat urban heat island effects
As it grew, Jupiter might have eaten a few planets, study finds
High heat to scorch Northwest early this week, but relief is on the way

Unlike monsoonal rains from the past two weeks that spread far northward, leading to destructive flooding near Yellowstone National Park, these rounds of rain are more likely to be confined to the south.

"While a couple of stray showers and storms may reach into the central Rockies, the bulk of the rainfall will be centered over the Desert Southwest, closest to the source of tropical moisture," Sadvary explained.