What will the weather be like this summer? Find out in AccuWeather's 2020 summer forecast.

Blistering heat has been swelling over the Plains, with the hot weather expected to shift eastward across the Midwest and into the interior Northeast. And wildfire season got the jump on summer with blazes already consuming thousands of acres in the Southwest. It’s also been “abnormally dry” through the Western states, with pockets of moderate and severe drought conditions, according to the U.S. Drought Monitor.

Here’s a look at the complete region-by-region breakdown of the United States with AccuWeather’s latest 2020 summer forecast.

After a couple weeks of rather dry conditions in the Northeast, summer, which begins with the solstice on Saturday, June 20, will kick off with frequent showers and thunderstorms across the Northeast, mid-Atlantic and Great Lakes, according to AccuWeather meteorologists. That’s similar to the pattern that took hold in the early part of spring in those regions when persistent wet weather suppressed temperatures below normal on most days.

The weather pattern will alternate between dry and wet conditions for those regions, but particularly more frequently wet for the mid-Atlantic. However, the season won't be a total washout. Plenty of summer heat is poised to move in as the season progresses.

“Heat will come in spurts in the first half of the summer season,” said AccuWeather Lead Long-Range Meteorologist Paul Pastelok. “But, as we get into July, I think that’s when we’ll start to see the heat peak, with temperatures climbing into the 90s.” 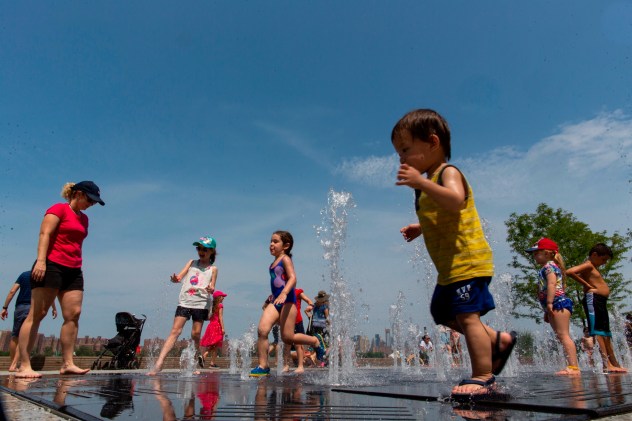 People enjoy the day playing with water as the Empire State Building is seen from Williamsburg on Saturday, July 20, 2019 in Brooklyn, N.Y. (AP Photo/Eduardo Munoz Alvarez)

Most of the scorching heat will take place in July and early August for places like Washington, D.C., Philadelphia and New York. The latter part of summer will yield a good chance for heat waves, where highs can climb to 90 degrees Fahrenheit or greater for three consecutive days, although Pastelok said record-shattering stretches of heat are unlikely.

Compared with the summer of 2019, which brought grueling heat at times and above-average temperatures for the season, the second half of summer 2020 is likely to be a little hotter. Temperatures are expected to average 2-3 degrees higher across the Northeast for the month of August compared to 2019 and closer to 1-2 degrees higher along the I-95 corridor throughout August, Pastelok said.

Once the hot weather arrives, the pattern may be tough to shake. Summer heat could persist well into September, said Pastelok.

Frequent heavy thunderstorms will target the area into the middle of the season. And that's only half of the story, particularly for the Southeast, where the threat of hurricanes looms especially large.

Tropical weather has already made its impact in what has been a record-setting start to the Atlantic hurricane season. “The risk this year is the Gulf of Mexico. Everything that we look at -- past years, modeling, you name it -- suggests that the Gulf Coast is going to be active," Pastelok said.

AccuWeather’s latest forecast for the Atlantic hurricane season calls for 14 to 20 tropical storms, seven to 11 hurricanes, four to six major hurricanes – storms of Category 3 strength or higher – and four to six tropical systems that could make direct impacts on the U.S. mainland, Puerto Rico and the Virgin Islands. There have already been three named tropical storm systems, and Cristobal impacted the Gulf Coast in early June when the tropical storm made landfall in Louisiana. 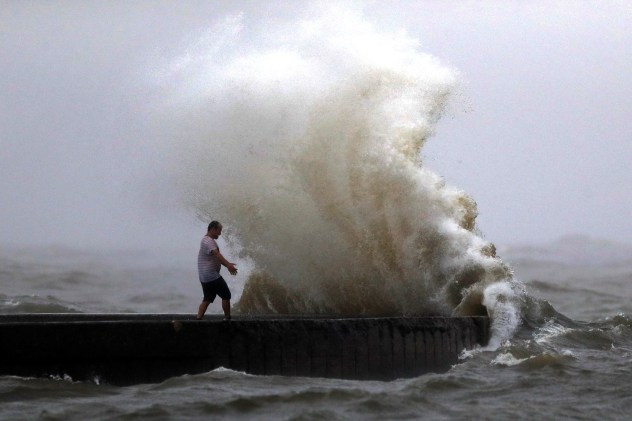 A wave crashes as a man stands on a jetty near Orleans Harbor in Lake Pontchartrain in New Orleans, Sunday, June 7, 2020, as Tropical Storm Cristobal approaches the Louisiana Coast. (AP Photo/Gerald Herbert)

“The U.S. Gulf Coast, all of Florida and the Georgia to Carolina coast, has the highest chance of being impacted directly by tropical activity this season,” said AccuWeather’s top hurricane expert, Dan Kottlowski.

Areas farther west will also have to watch tropical forecasts closely however, but the threat for those places may not emerge until later in the season.

"I do think there is a higher-than-normal chance for Texas to have a direct impact from a tropical storm or hurricane this season. However, statistically, Texas is more vulnerable during August and September,” said Kottlowski.

Although it may not be continuous, heat surges across the northern Plains, Midwest and Ohio Valley this summer will overrule any cooldowns. There will be a slight shift in the overall pattern from the West Coast to the Plains.

As a result, Minneapolis, Chicago and Kansas City look as though they'll be hotter and drier than initially expected, meaning an increase in cooling may be required to keep indoor spaces comfortable. Still, occasional breaks in the heat cannot be ruled out, which can lead to pleasant afternoons, especially from the Midwest on East. 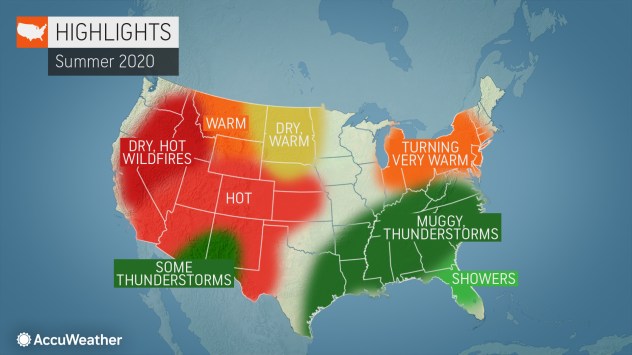 Drier conditions in the northern Plains can lead to potential drought conditions and some stress on the growth of corn and wheat in those areas, Pastelok said.

Early on in the summer, severe thunderstorms are forecast to roll through the Ohio Valley, but the severe activity will shift eastward as the season progresses.

“We do think the air masses will become more stable as the season progresses,” Pastelok said. “There may be very little severe weather to talk about in the Plains and parts of the Midwest," he continued, adding that severe weather is more likely to erupt "farther east into the Ohio Valley and eastern Tennessee Valley as we get into late June and July.”

“Places like Detroit, Columbus and Cleveland have a higher risk [of getting severe storms] this summer than places like Des Moines, Iowa, Kansas City and Minneapolis,” he added.

Past and future rain events can hold back daytime temperatures in the far southern Plains and especially into the lower Mississippi Valley, and humidity levels will remain high.

“Frequent fronts may get down into the southern U.S., which is kind of unusual as you get into July and August,” Pastelok said. With cooler air prevailing to the north and a more humid air mass fueled by the warm waters of the gulf, parts of southeastern Texas up to Dallas could experience more frequent severe weather, he said.

Meanwhile, southwestern Texas, including cities such as El Paso, is poised for prolonged hot weather. Drought conditions have intensified and expanded from the southwestern Plains north into Oklahoma and Kansas and has led to early hot weather. Hot and dry weather can persist for most of the summer season.

Not surprisingly, hot weather has been and will continue to be a recurring theme during the first part of the season in the Southwest.

In fact, heat more typical of summer made an entrance in late April, complicating social distancing measures in Southern California, where many sought relief by heading to the beach. And in Phoenix, the mercury soared into the triple digits in late April as a heat wave set in.

Not only was it hot in some of these places, but minimal precipitation made it very dry. The U.S. Drought Monitor indicates large sections of the Southwest were enduring severe drought conditions by mid-June with pockets of extreme drought in some areas. Wildfires were increasingly an issue as blazes spread across parts of six states in the days leading up to summer.

The region will finally get a break from parched conditions in July and August, as monsoon moisture begins to arrive.

The moisture should lower the wildfire risk until August and September across central and southern parts of California, Pastelok said. However, the monsoon rainfall overall may average near to slightly below normal.

Heat has mainly been affecting areas across the interior Northwest into the Great Basin, the Rockies and, at times, the Plains, as storms have continued to target the Northwest. Systems have unleashed frequent episodes of showers, severe weather, including a derecho in early June, and even late snow in the mountains. Even though the worst of summer's heat is expected to scorch interior areas, dry conditions will build across the entire Northwest this season.

Residents in the Rockies and interior parts of the Northwest should brace for a very warm summer and possibly some water restrictions later in the season.

“Places anywhere from Spokane, Washington, southward down into Northern California near Redding will easily record high temperatures in the 90s in the middle of the summer, and it may continue all the way into August,” Pastelok said.

Severe drought has developed in San Francisco and extreme drought for much of Northern California. This will persist for most of the summer. Drought conditions should expand into the northern Rockies by late summer and possibly last through early fall, he added.