A firefighting aircraft dropped fire retardant on the Bighorn Fire burning near Tucson, Arizona, on June 11. The fire has scorched through thousands of acres.

The wildfire season in the Southwest picked up plenty of steam in recent days as the calendar inches toward the official start of summer on June 20. In parts of Arizona and New Mexico, that season is already fully ablaze.

Wildfire worries in the Catalina Mountains ignited in the first week of June when lightning sparked the Bighorn Fire. The blaze, which has consumed 15,805 acres and is 40% contained as of Wednesday morning, has been fed steadily by dry, windy conditions.

“The topography is extremely challenging. These mountains are very rugged, very remote. There’s not a lot of road access into them. So that all makes firefighting very challenging,” Molly Hunter told AccuWeather on Tuesday. Hunter is the public information officer for the Bighorn Fire.

“Due to the fire, Catalina State Park and several popular trails in the area are closed … The vegetation in the area is tinder-dry including tall grass, brush, dormant brush and hardwood slash,” according to fire incident overview on InciWeb.

Among that vegetation has been the overgrowth of invasive buffel grass. Ben Wilder, director of Tumamoc Hill’s Desert Laboratory, told Tucson.com that the highly flammable, non-native grass has spread to areas of the Catalina foothills that don't normally burn during wildfires. 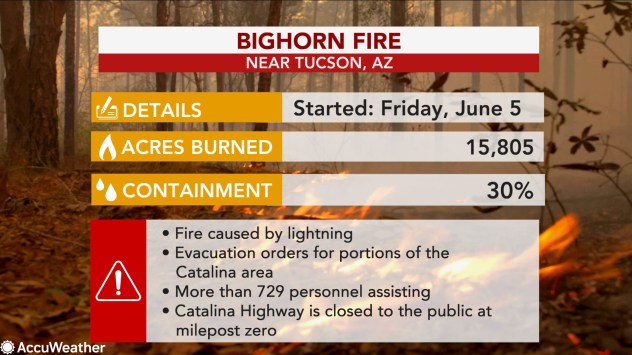 However, Wilder also said a similar blaze could be much worse in future years if buffle grass growth isn't contained.

Going forward, AccuWeather Senior Meteorologist David Samuhel said, the winds, along with a lack of rain, will continue to complicate situations for firefighting crews in the coming days. 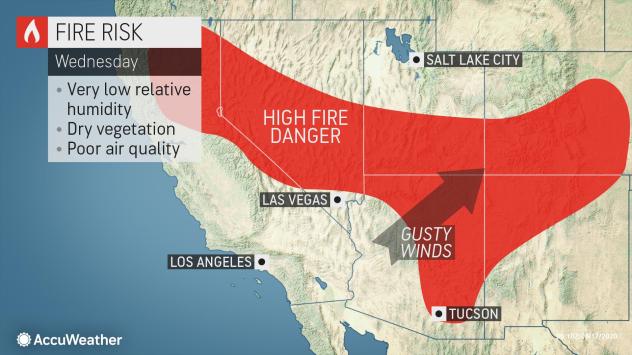 “The strongest winds will occur during the afternoon and evening hours Wednesday,” he said. “Gusts over 30 mph will hamper firefighting efforts. Along with the gusty winds will come low relative humidity.”

Although temperatures will drop this week, compared to last week, no rain is expected any time soon, Samuhel said. AccuWeather Senior Meteorologist Jack Boston added that winds are expected to pick up to 10-20 mph by Friday and Saturday in the Pima County area.

However, there has been some good news in terms of weather conditions.

“We had a little bit higher “humidities,” lower temperatures [Monday] night, so that allowed fire crews to conduct some burnout operations to sort of the northeast portion of the fire to kind of bolster some containment lines there,” Hunter told AccuWeather on Tuesday. 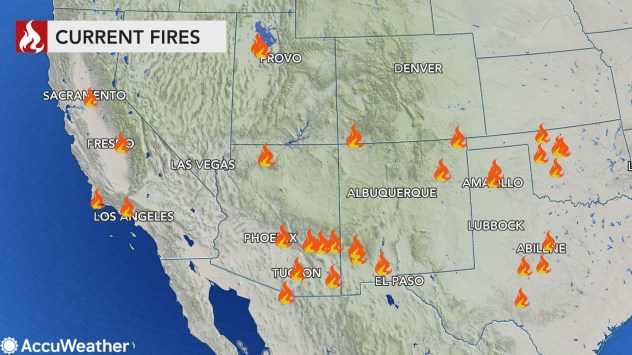 More than 300 miles away in Greenlee County, Arizona, the Bringham Fire swelled to 15,398 acres on Monday after igniting on June 6. At only 5% contained, crews struggled with the blaze over the weekend as it tripled in size.

Elsewhere in southeastern Arizona, the Blue River Fire erupted over the weekend before crews made significant strides to curtail its spread. As of Tuesday morning, the blaze had burned 30,400 acres and was at 85% containment.

The largest blaze in the state is the Bush Fire, which is northeast of Phoenix. The fire has consumed more than 89,000 acres, making it the largest wildfire in the state. It is certain to expand even more with just 5% containment as of early Wednesday. 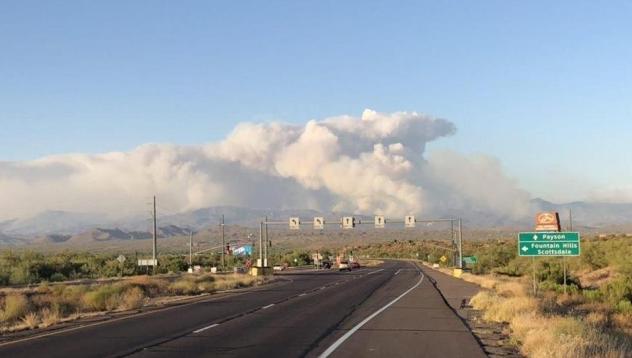 Smoke from the Bush Fire billowing high in the sky on June 15, 2020. (Photo/InciWeb)

Evacuations have been ordered in areas near the fire, including Tonto Basin, Punkin Center and Sunflower.

Farther north, near the Utah border, the Magnum Fire forced the closure of the North Rim of the Grand Canyon, according to the National Park. At 47,561 acres burned, the fire is only 3% contained and has also forced a portion of Highway 89A to close as well.

The Arizona fires have burned over 230,000 total acres, but Boston said a cluster of smaller fires in northeastern New Mexico, southeastern Colorado and northwestern Oklahoma is particularly concerning.

"These are in areas of severe to extreme drought with low relative humidity and gusty winds," Boston said of the blazes. "These could multiply and spread rapidly over the next few days with little, if any, prospects for any rainfall."