Parts of Canada endured historic flooding last autumn. Is a repeat in store this season? Plus, some provinces could have a milder-than-normal season, but that won’t rule out the chance of earlier-than-usual snowfall. 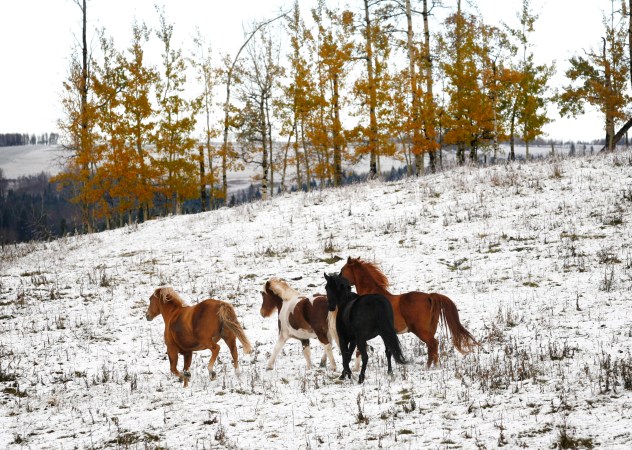 Horses run through a snow-covered field after an autumn snowfall covered the ground near Cremona, Alberta, with nearly 3 cm of snow on Tuesday, Oct. 14, 2008. (AP Photo/The Canadian Press, Jeff McIntosh)

Fall is on the horizon for the North American continent as the autumnal equinox on Sept. 22 is officially less than a month away. Ahead of the summer heat settling down, pumpkin spice returning in full force and leaves beginning to change colors, AccuWeather has released its annual Canada autumn forecast.

As has been the case for much of the year so far, and for the last handful of autumns, La Niña will play a major role in the upcoming fall weather pattern. La Niña is a climatological phenomenon that occurs when sea surface temperatures in the central and eastern tropical Pacific Ocean drop to lower-than-average levels, which in turn affects weather patterns thousands of miles, or kilometers, away.

"For the third consecutive year, a La Niña will be in place this fall, which will likely impact the overall weather pattern for Canada this upcoming season and perhaps into winter," AccuWeather Senior Meteorologist Brett Anderson said.

Anderson is a veteran forecaster with more than three decades of experience. During much of this time, he has closely studied the weather patterns that impact Canada. Examining past autumns influenced by similar climatological conditions allows forecasters to piece together the atmospheric jigsaw puzzle of how the weather may unfold across Canada this season.

For a complete region-by-region breakdown of what weather conditions can be expected in the coming months, read on.

La Niña conditions can alter the overall atmospheric pattern in multiple ways. One of the most significant factors for this fall's forecast will be how La Niña affects the position of the jet stream. The position of the jet stream determines the general track of stormy weather and, depending on the position, certain regions can be in for a much wetter or, conversely, a much drier season.

"An active, Pacific storm track is anticipated to be directed into British Columbia this fall, which will favor above-normal rainfall and cloudier, cool days," Anderson said.

One of the most devastating flooding events in the history of British Columbia occurred during the La Niña-influenced fall of 2021. In November 2021, epic amounts of rainfall triggered deadly flooding across portions of southern British Columbia that displaced thousands of residents, washed away bridges and roadways, cut off railroad routes and drowned livestock. 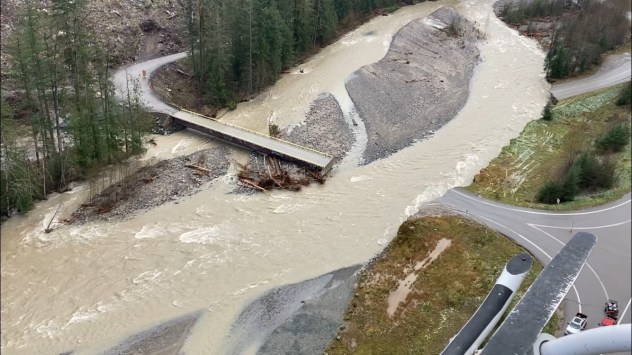 A swollen creek flows under a washed-out bridge at the Carolin Mine interchange with Coquihalla Highway 5 after devastating rain storms caused flooding and landslides, near Hope, British Columbia, Canada November 17, 2021. (B.C. Ministry of Transportation and Infrastructure/Handout via REUTERS)

While a repeat of 2021's calamitous flooding is unlikely given that event was a 500-year flood, or a flood that has a 1 in 500 (0.2 percent) chance of occurring in a given year, other heavy rain events cannot be ruled out this fall.

In addition to rainfall, any stronger storms that track through British Columbia and the rest of western Canada can also bring windier conditions when compared to normal, according to Anderson.

Heavier storms can bring localized flooding concerns, but any rainfall will work to ease wildfire concerns by reducing the amount of dry fuel available.

"The projected weather pattern this fall should favor conditions that will help with fire suppression," Anderson said.

In terms of temperature, waves of colder, Arctic air are forecast to impact portions of western Canada this upcoming season due to the anticipated position of the jet stream.

"The coldest air relative to normal for all of Canada is expected across northwestern Canada, specifically northern British Columbia, the Yukon Territory and the western portion of the Northwest Territories," Anderson said.

In addition, the pattern this fall may also lead to an earlier-than-usual start to the snow season in the Coastal and Rocky Mountains, according to Anderson.

In places like Vancouver and Abbotsford, this fall is expected to be fairly normal when it comes to temperatures, but overall precipitation is set to surpass seasonal averages.

Mild weather for portions of the Prairies

While precipitation and temperatures are forecast to be about average, Anderson does expect that the season could turn out fairly windy.

Precipitation amounts will also remain near normal for much of Saskatchewan and Manitoba, although there will be a few exceptions. Portions of far northern Manitoba can experience above-normal precipitation as storms move across the Hudson Bay and surrounding areas. 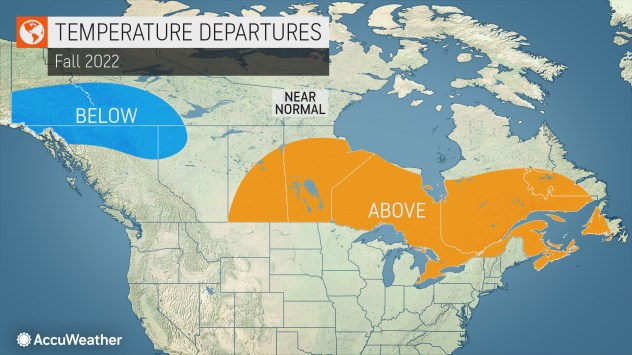 In terms of temperatures, Anderson expects a mild fall across the central and eastern Prairies. Large swaths of Saskatchewan and much of Manitoba, including cities such as Regina and Winnipeg, are forecast to experience above-normal temperatures this autumn.

However, these mild temperatures are not expected to hinder any late-season snow chances, according to Anderson.

AccuWeather meteorologists say this autumn is shaping up to be a "tale of two coasts" in Canada. While western Canada is likely in for a wetter and cooler-than-average fall, the opposite is expected for eastern Canada.

"A drier and warmer fall is expected across much of eastern Canada, including Quebec and northern and central Ontario," Anderson said.

As of July 31, large swaths of Ontario and Quebec had avoided widespread dryness or drought conditions so far this summer. The one exception to this trend is far southern Ontario where abnormally dry to severe drought conditions were in place, according to the Canadian Drought Monitor. 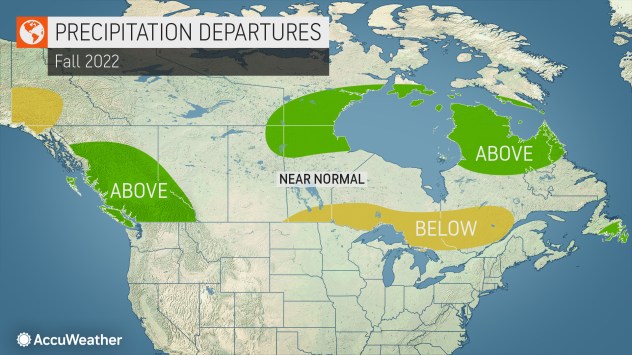 Although the largest population centers in southern Ontario are rather urbanized, a lack of wet weather this fall will continue to dry out any ground and may raise the wildfire risk across the rest of the province.

"Despite the overall warm look to the season, nights can quickly turn cold due to the drier ground," Anderson explained. Colder nights may also spell early season frosts or freezes.

Farther east, the Maritime Provinces, which include New Brunswick, Nova Scotia and Prince Edward Island, are also in store for a warmer-than-average autumn.

"The combination of the expected storm track and unusually high sea surface temperatures should favor a balmy fall for most of the Maritime Provinces," Anderson said.

While some residents hoping for a chilly autumn may end up disappointed, the anticipated temperatures and precipitation amounts can foster good conditions for a popular pastime: leaf-peeping. 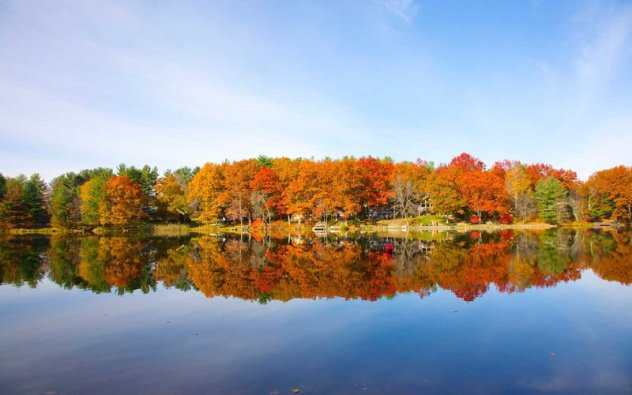 However, the timing of peak colors may be delayed by as much as a week later than normal, Anderson added.

Tropical troubles may brew due to warm Atlantic waters

Despite the relatively slow start to the Atlantic hurricane season, AccuWeather forecasters caution residents along the Atlantic coast not to become complacent. Climatologically, hurricane season in the Atlantic begins to ramp up during the month of August, reaches its peak in September and still remains quite active in October.

While many may think of the Caribbean, Gulf of Mexico and the southeastern coast of the United States as the zones most at risk for tropical activity, Atlantic Canada is not completely free and clear of tropical trouble.

In 2021, Atlantic Canada was impacted by multiple tropical systems throughout the hurricane season, but only one strike occurred during meteorological fall, defined as September through November. In September of 2021, Newfoundland took a direct strike from Hurricane Larry, which was a Category 1 hurricane at the time of landfall. Larry brought down trees, snapped power lines and caused structural damage to buildings in its path.

Warm water is one of the major factors for sustained tropical development as tropical systems feed on the energy available in water with elevated sea-surface temperatures. Already this summer, sea-surface temperatures are anomalously high in the waters south of both the Maritimes and Atlantic Canada, according to data from the United States' National Oceanic and Atmospheric Administration (NOAA).

With La Niña conditions expected to continue into the fall, no significant pattern change is forecast to alter these abnormally warm waters before autumn begins. This will leave Atlantic Canada vulnerable to impacts from a tropical system such as drenching rainfall and damaging winds.

10 wacky weather words to add to your vocab