An oblong stone with three ancient statues has protruded from the drying river bed. They are believed to date back to the Ming period, during which Buddhism blossomed in China.

China is in the clutches of a record-breaking heat wave that has been ongoing for 70 consecutive days, and residents across the country are facing devastating impacts as a result. The heat has been compounded by bone-dry conditions, which have caused historical drought conditions for some regions, including the Yangtze River Valley.

The Yangtze River is the world's third largest river and the longest river in Asia. It is a significant source for hydropower and transportation, provides drinking water to more than 400 million residents in China and brings water to nearby agricultural regions.

Portions of the Yangtze River flowing through the municipality of Chongqing in southwestern China have dropped so significantly that age-old statues that date back to the Ming and Qing dynasties have been uncovered. On the highest point of the Foyeliang island reef, previously submerged in the Yangtze River, an oblong stone now protrudes and displays three ancient Buddhist statues. 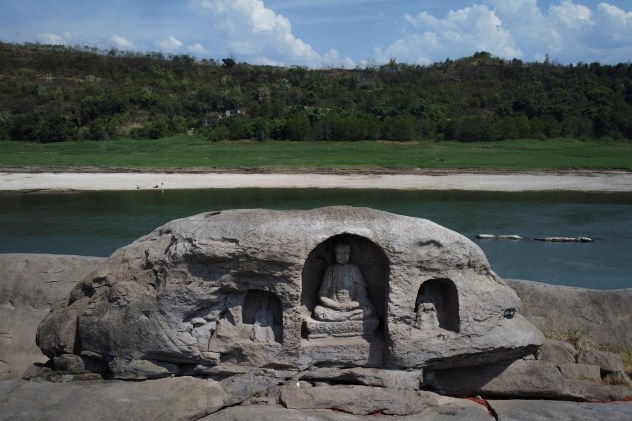 A once submerged Buddhist statue sits on top of Foyeliang island reef in the Yangtze River, which appeared after water levels fell due to a regional drought in Chongqing, China, Aug. 20, 2022. REUTERS/Thomas Peter TPX IMAGES OF THE DAY

Experts believe that the statues were carved roughly 600 years ago based on analysis of their design. During the Ming period, from 1368 to 1644, Buddhism blossomed in China and became implanted into common society.

It is not the first occurrence of submerged Buddha statues discovered across China. In 2017 a separate Buddha carving was found in China's Jiangxi Province, Xinhua reported. It was determined that the statue dated back to the Ming Dynasty. Locals told Xinhua that due to the Buddha's placement at the intersection of two rivers where boats have commonly overturned, it was believed that it was carved there so that people could pray for safety as they traveled the waters.

The China Meteorological Administration issued its first national drought alert of the year on Aug. 19, prompted by the low water levels of the Yangtze River and concerns for significant water shortages.

"Rainfall has been below normal across the Yangtze River Valley since May. This is due to persistent ridging over the region since July that has led to the multiple heat waves," explained AccuWeather Lead International Forecaster Jason Nicholls. 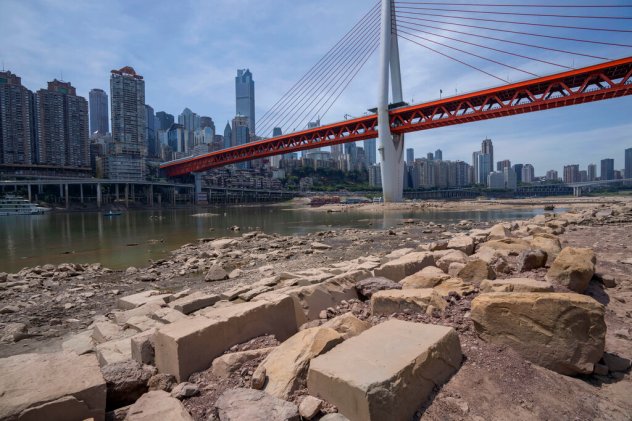 Rocks are exposed on the dry riverbed of the Jialing River in southwestern China's Chongqing Municipality, Friday, Aug. 19, 2022. Ships crept down the middle of the Yangtze on Friday after the driest summer in six decades left one of the mightiest rivers shrunk to barely half its normal width and set off a scramble to contain damage to a weak economy in a politically sensitive year. (AP Photo/Mark Schiefelbein)

The ongoing impacts of the heat and drought on the river levels in parts of China have now begun to affect hydropower, a resource that many Chinese provinces are heavily reliant on. The Sichuan Province in southwest China utilizes hydropower for roughly 82% of its energy utilization, according to Bloomberg News, and the low river levels are triggering widespread shipping delays and ceasing operations for some companies.

In Sichuan, the demand for power has increased by 25% this summer, a local media outlet told The Guardian. Rising temperatures and the lengthy heat wave have prompted residents to crank up the air conditioning, placing a hefty strain on energy demand.

The Sichuan provincial government announced that the water flow to the area reservoirs has decreased by half. Downstream from Sichuan, issues relating to hydropower have cascaded to the municipalities of Chongqing City and the Hubei Province.

Due to the shortage, the province suspended or limited power supply to thousands of factories and the public last week. Plans to restart production are in place for this week.

AccuWeather forecasters say that relief from the heat may not arrive until mid- to late week.

Temperatures will trend lower starting Wednesday as the ridge of high pressure begins to weaken, according to Nicholls.

Additionally, the chances for rainfall across the region are expected to increase in the upcoming days and help to ease the drought conditions.

"A stalling front can bring the area some needed rainfall Friday into early next week," explained Nicholls.