A once-in-500-year flood event in British Columbia swallowed highways, washed away bridges and cut off railroads. At least four are dead in the province and thousands remain stranded as rescue and recovery efforts continue.

Flooding inundates Abbotsford, British Columbia, on Nov. 16, in the aftermath of an atmospheric river passing the area. This video of widespread flooding was captured by an airplane passenger.

A historic storm that produced epic amounts of rainfall triggered devastating, widespread flooding across portions of the northwestern United States and British Columbia, Canada, last week. The storm displaced thousands of residents on both sides of the border with thousands still stranded almost a week later. The storm was also blamed for one death in the U.S. and four others in Canada and prompted multiple state of emergency declarations.

Search and rescuers in British Columbia continue to try and reach thousands of residents still stranded by a combination of landslides and roadway closures. An estimated 18,000 people remained stranded as of Thursday, according to The Guardian.

Several portions of Highway 1, the main route of the Trans-Canada Highway through British Columbia, remained closed on Friday due to washouts with no estimated time of reopening, according to DriveBC.

Canadian officials have described the flooding as a once-in-500-year event, also known as a 500-year flood. A 500-year flood is defined as a flood that has a 1 in 500 (0.2 percent) chance of occurrence in a given year.

Much of far southern British Columbia picked up widespread rainfall totals of 6-8 inches (150-200 mm) throughout the prolific event. Even Vancouver, Canada's third-largest city, the country's largest port and a major economic hub, recorded widespread rainfall on the order of 5 inches (125 mm) or more. 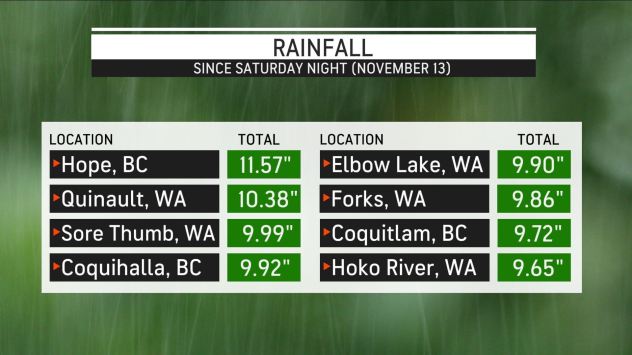 This graphic shows some of the highest three-day rainfall totals from Nov. 13 to Nov. 16 across parts of Washington and British Columbia.

As of Wednesday, a number of inundated areas in both the U.S. and Canada had yet to see floodwaters fully recede even days after rainfall had ceased. Heavy rainfall also forced large swaths of land to give way and create disastrous, even deadly results.

The body of a woman was recovered from a mudslide near the town of Lillooet, British Columbia, on Tuesday. The mudslide, which buried a total of seven cars, forced rescue crews to work in a level of debris they had never encountered.

“It is a significant amount of debris. It makes it very difficult for our search crews. The mud is up to their waist. I can’t recall our team being involved in anything like this in the past,” David MacKenzie, the Pemberton District Search and Rescue manager, told The Associated Press.

Officials, especially those in British Columbia, are worried that the death toll will continue to climb as rescue, recovery and clean-up efforts continue.

"We expect to confirm even more fatalities in the coming days," British Columbia Premier John Horgan said, according to Reuters.

Members of the Canadian armed forces have been deployed to help thousands of residents who have been stranded since last Sunday, the BBC Reported. The troops will also help rebuild the devastated areas.

One man told the BBC that the scenes in the aftermath of the storm were like "Armageddon."

On Wednesday, Mike Farnworth, Minister of Public Safety and Solicitor General, declared a provincial state of emergency for British Columbia. According to a press release, the state of emergency was set forth to "mitigate impacts on transportation networks and the movement of essential goods" and to support response and recovery efforts.

Last week's floods have caused major issues for transportation networks across portions of British Columbia. Every major route between the Lower Mainland of British Columbia, which includes Vancouver, and the interior of the province has been severed by flooding, washouts or landslides, according to the AP.

“Our focus is on clearing, repairing and reopening roads to connect the Interior and the North to the Lower Mainland and Vancouver Island, to get our supply chains moving,” said Rob Fleming, British Columbia's minister of transportation and infrastructure.

The full economic ramifications of these floods and disruption to transit may not be fully realized for quite some time, adding yet another hurdle to an already-stressed supply chain.

The devastation of last week's unprecedented flooding was also quickly felt by the agriculture industry of British Columbia. Although the town of Abbotsford, a significant farming community, was under an evacuation order on Tuesday, some farmers stayed behind in an attempt to rescue their livestock.

Dramatic footage of rescue efforts showed farmers and volunteers racing against the clock to pull cows out of rising water. Rescuers tied ropes around the necks of the cows and pulled them to safety, while some used their bare hands and others turned to jet skis.

Cattle were rescued from deep water after an atmospheric river triggered flash flooding in Abbotsford, British Columbia, on Nov. 16. The flooding was so intense it forced evacuation orders to be issued for the entire town.

Despite the best efforts of rescuers in the province, Provincial Agricultural Minister Lana Popham said that thousands of animals had died and others would have to be euthanized, according to Reuters.

Home to more than 1,200 farms, Abbotsford supplies half of the dairy, poultry and eggs consumed by those living and working in British Columbia, according to The Guardian.

As of Thursday, at least one death was attributed to the heavy rainfall and subsequent flooding in the United States. The body of a 59-year-old man was discovered on Wednesday near Everson, Washington. The man, identified as Jose Garcia, had been missing since Monday when his truck was swept away by floodwaters.

Evacuations and water rescues were conducted elsewhere in the state early last week. In one incident, the United States Coast Guard shared a video showing a harrowing rescue by helicopter of six adults and four children, including one baby, near the town of Forks, Washington. Farther north, flooding in Bellingham, Washington, left more than 500 residents displaced after the nearby Skagit River overflowed its banks.

AccuWeather forecasters say this major flooding event was a result of a phenomenon known as an atmospheric river. This particular atmospheric river setup is known colloquially as "the Pineapple Express" since the moisture extends back to Hawaii and the tropical Pacific.

According to AccuWeather Senior Meteorologist Adam Douty, British Columbia will get a brief reprieve before unsettled weather returns.

"British Columbia will see a dry and milder period on Monday before a storm can bring a dose of lighter rain and mountain snow on Tuesday," Douty explained.

While this early-week storm may not be enough to significantly impact cleanup or lead to new flooding, there may be a more potent storm on the horizon, according to Douty.

"Though it is still expected to pale in comparison to what recently hit the province, a more significant storm can impact the region during the second half of this week," Douty cautioned.