A major shift in the pattern will send cool air, and even some snow, across the central U.S. following widespread warmth.

Residents from the Rockies to the Plains to the Midwest have had weather more representative of the middle of summer over the past several days, but AccuWeather forecasters say that the warmth is about to come to an abrupt end with some locations plunging back into winter.

Thursday was the final warm day in the region with temperatures ranging from the 80s F in Denver, Sioux Falls, South Dakota, and Valentine, Nebraska, to the century mark or above in Amarillo and Lubbock, Texas.

A strong cold front began to dive southward through the northern Rockies on Thursday night and will continue its southward journey through Friday.

Precipitation associated with the front will start off as rain in Wyoming and Colorado, but as temperatures tumble after the passage of the cold front, the rain will eventually change over to snow later Friday and Friday night. 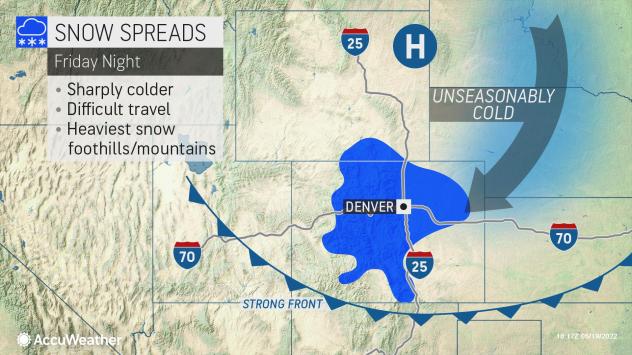 Denver has the potential to get an unusual late-season snow accumulation with a few inches of snow in the forecast.

"Predicting the snowfall accumulation in this part of the country, and at this time of year, poses a number of challenges," said AccuWeather Meteorologist Matt Benz.

"There are variables such as the elevation differences in the region, duration and intensity of the snow, paved versus non-paved surfaces and the time of day," added Benz.

With this snow falling in the middle of May, there is an additional hazard that is not a concern during the winter.

"With trees leafing out in the lower and intermediate elevations, even a few inches of wet, clinging snow can cause problems ranging from limbs breaking to power outages and blocked roads," cautioned AccuWeather Senior Storm Warning Meteorologist William Clark.

Any downed trees could fall onto power lines, which may leave people without heat during the unseasonably cold weather.

Outside of Wyoming and Colorado, snow is not expected. However, temperatures more representative of July will fall back to something more typical in late winter by Friday and Saturday.

The temperature could drop more than 40 degrees in just 24 hours in Cheyenne, Wyoming, and Denver from Thursday into Friday.

AccuWeather RealFeel® Temperatures could even dip into the 20s and teens on Friday night. 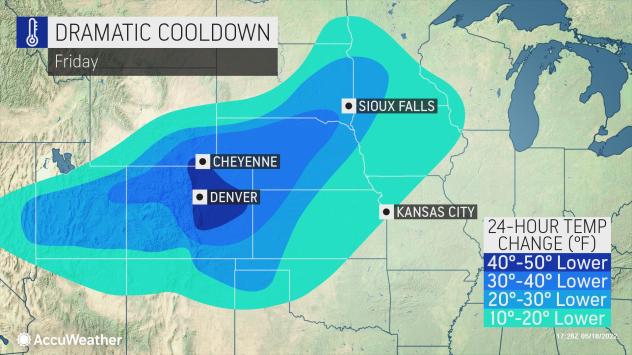 Saturday could end up being the coldest day for many cities across the region.

Kearney, Nebraska, is predicted to top out in the lower 50s F on Saturday, a high temperature common in the middle of March. The normal high in mid-May is 73 F.

After a high of 100 F on Thursday, Amarillo, Texas, will manage to reach only the mid-60s by Saturday. Normally, a high of 65 degrees is observed on St. Patrick's Day, March 17. 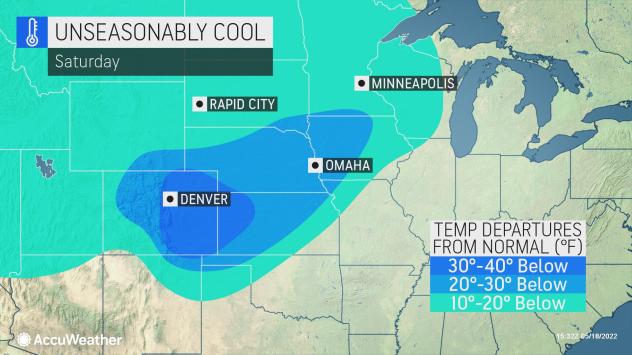 Dallas has had a high temperature of 90 degrees or above every day since May 7. This streak is likely to continue through Friday before being snapped on Saturday. By Sunday, the mercury may rise no higher than the lower 70s.

Temperatures are expected to creep back toward normal next week, but record-challenging heat is not in the cards again anytime soon.