With less than two weeks before Memorial Day, officials are working quickly to fix storm-damaged beaches.

With the unofficial start to summer quickly approaching and AccuWeather meteorologists forecasting temperatures in the 90s for areas along the East Coast this weekend, the summerlike weather is bound to make many people eager to grab their towels and head to the beach, but one part of the beach on the Jersey Shore won't be opening anytime soon.

Due to a recent storm that had stalled off the coast earlier this month, some beaches along the Jersey Shore don't have enough sand to accommodate beachgoers.

The Jersey Shore encompasses about 141 miles of beaches bordering the Atlantic Ocean, and tourism is the economic lifeline for many of the beach towns along that stretch of coastline. Each time a coastal storm rolls through, residents of Ortley Beach, which is roughly 45 miles north of Atlantic City, are reminded of the ongoing erosion that is eating away the beach and damaging dunes throughout the barrier island. 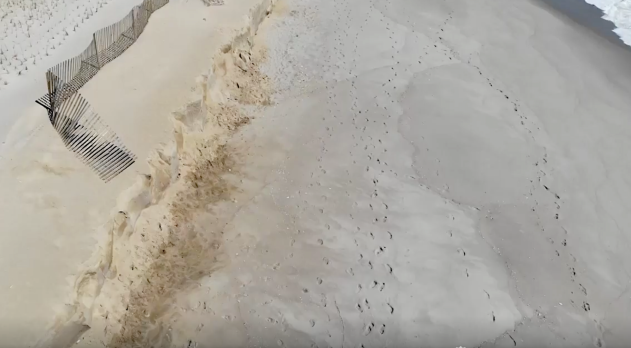 Drone images showed a long stretch of the beach in Ortley Beach, New Jersey, which was wiped out by heavy surf from a recent coastal storm. The beaches there don't have enough sand to be opened for Memorial Day weekend, the unofficial start of summer.

While the erosion on Ortley Beach is not a new problem, the recent Mother's Day coastal storm that washed away homes in the Outer Banks of North Carolina and exposed "ghost tracks" on a beach in Cape May, New Jersey, also wiped out a massive amount of sand along the 4,000-foot-long beach and left cliffs as tall as 6 feet.

The high tide reached all the way up to the base of the cliffs, and as waves continue to come crashing down, more and more of the beach is eroded away in a vicious cycle. Drone footage shot this week from above Ortley Beach showed lengthy cliffs carved out by heavy surf kicked up by the recent coastal storm.

"After the Army Corps [of Engineers] came out, they had built us a nice, flat beach, and that's very good for energy dissipation," Robert Chanklian, the Toms River town engineer, told AccuWeather National Reporter Jillian Angeline. "The waves roll gently up a beach; their energy is dissipated. As the storm erodes the sand and ends up with these vertical surfaces, the waves, instead of giving up the beach, they pound into this and create more erosion." 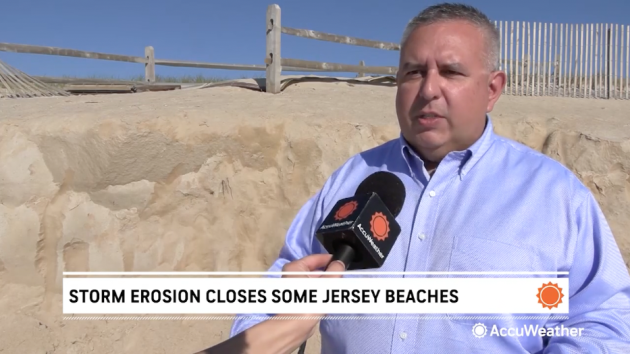 According to Toms River Mayor Maurice "Mo" Hill, the storms that create significant coastal erosion along the Jersey Shore typically occur in the winter months. This allows officials ample amount of time to clean up and rebuild the beaches and dunes before the warmer months come around -- and the beachgoers arrive in droves.

Ortley Beach officials said that they must rebuild the beach and surrounding dunes on the closed section of Ortley Beach before reopening it to the public because it poses a fall hazard to beachgoers. And officials say the replenishing won't happen quickly.

While a combined effort from local engineers and the Army Corps will be needed to fully restore the beaches along the Jersey Shore from erosion, a local contractor has been hired to rebuild the section of Ortley Beach. Workers will bring in truckloads of sand to fill the beach and surrounding dunes. Officials estimate the damaged area will be filled by the end of June, which is just time for the beginning of local schools' summer vacation.

The Army Corps will then come to the beach later in the year, or early next year, to address the erosion even further as part of a federal, state and locally funded, 50-year agreement to upkeep the beach. Crews from the Army Corps will have the horsepower to rebuild the beach so that the small refilling project won't be needed as often, according to Chanklian.

"They use a dredge," Chanklian said. "It scours up the sand, sucks it up like a vacuum, pumps it onto the beach, and then as they pump that slurry of sand and water on the beach, the water runs down, and we're left with sand." 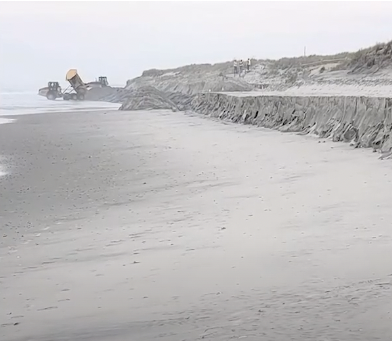 Ortley Beach was hardly the only town impacted by the recent storm. Beaches in Avalon, which is about 67 miles south of Ortley Beach, were left with cliffs after strong waves ate away at the beach. Similar scenes were spotted in nearby Ocean City as well.

A team at Stockton University Coastal Research Center has been tasked with surveying the damage along the Jersey Shore. Evan D'Ambrosio, a field specialist, shared a photo of the massive cliffs lined along Avalon's beach.

"That's the most substantial damage I've ever seen since I've been working for four or five years now," is how D'Ambrosio described the recent erosion.

The team D'Ambrosio is a part of will deliver the damage assessment survey results to the impacted towns when completed. This will help give town officials a better idea of how much work will be needed to repair the beaches and surrounding dunes.

Rebuilding the dunes is crucial ahead of the 2022 Atlantic hurricane season, which is predicted to be an above-normal season according to AccuWeather's veteran meteorologist and hurricane expert Dan Kottlowski.

"The beaches are nice to have, but the dunes are what we need to protect everything," said Hill. "This dune is going to protect the coastline, and that's what's important." 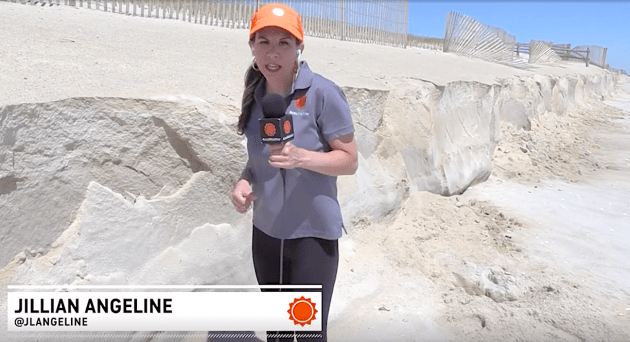 AccuWeather National Reporter Jillian Angeline stands next to cliffs left in the sand at Ortley Beach after heavy surf from a recent coastal storm devoured the town's beaches.

Sand dunes protect inland areas from storm surges and large waves propagating inland, which in turn reduces the amount of coastal flooding and structural damage in an area. Coastal areas without dunes are more susceptible to higher rates of erosions and more frequent coastal flooding.

"The beach is a big economic driver for the Jersey Shore," said Hall. "A lot of businesses will make their money over the summer months."