As nearly 55 million people travel for Thanksgiving this year, AccuWeather's experts say a developing storm system could pose travel concerns before, during and after the holiday.

The atmospheric pieces may come together just right for a large storm to form over the center of the country on Thanksgiving with impacts spreading eastward beyond the holiday, AccuWeather forecasters say. Travelers should be prepared for a slew of hazards ranging from heavy rain and wind to accumulating snow for some.

Nearly 55 million people are projected to travel 50 miles or more from home this year for Thanksgiving, an increase of 1.5% from 2021 and close to pre-pandemic levels, according to AAA. Almost 49 million of these travelers will be hitting the roadways, while about 4.5 million are planning to reach their destinations by air.

Regardless of what mode of transportation people use in the coming days, experts say that the incoming weather system could add to the delays that air passengers and motorists face, beyond those expected due to the sheer volume of travelers. Major hubs such as Chicago, Atlanta and New York could all face impacts.

AccuWeather meteorologists have been discussing scenarios around this looming storm since the middle of last week. A storm is expected to move into the Pacific Northwest with rain and mountain snow on Tuesday. Seattle and other lower elevations in western Washington will face the brunt of the storm's rain as around a foot of snow potentially buries the Washington Cascades and northern Rockies. 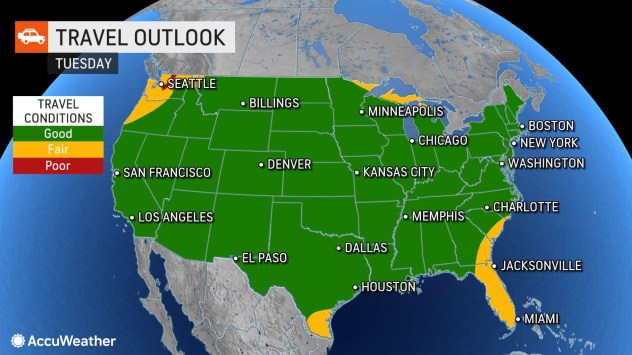 "This part of the storm will pack most of the energy needed for the bigger storm to form later in the week," AccuWeather Senior Meteorologist Bill Deger explained.

The storm will lack a significant amount of moisture once it crosses the northern Rockies and enters the Plains. This will result in flurries and light snow that should be more of a nuisance than a major travel disruption across parts of Montana, Wyoming and the Dakotas during the middle of the week.

Outside of the wintry weather, as well as downpours in Florida and along the Southeast coast, the balance of the country can expect quiet conditions for travelers the day before Thanksgiving. 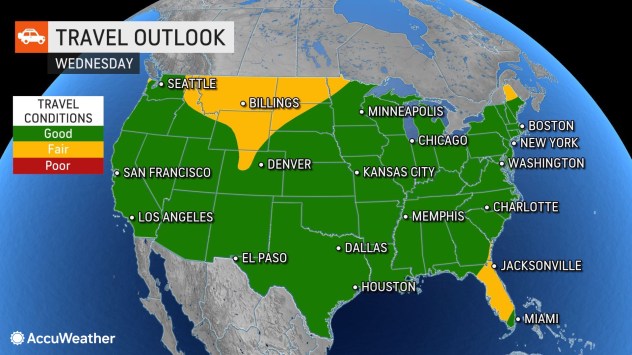 Moisture from the Gulf of Mexico is expected to stream northward as the storm progresses eastward on Thanksgiving. Should this moisture link up with the incoming storm quickly, AccuWeather forecasters say a large storm could develop over the center over the country. If this connection fails to occur, two separate storms may impact portions of the South and then the Northeast, as opposed to one broad system.

Even with the details that need to be ironed out in the coming days, there are a few areas where there is increased confidence in the forecast.

"Thunderstorms packing torrential downpours could make for a soggy Turkey Day in cities such as Lake Charles and New Orleans, Louisiana, and Jackson, Mississippi," Deger said. "Meanwhile, snow showers could make for make for a wintry scene and slick roads in parts of the Upper Midwest." 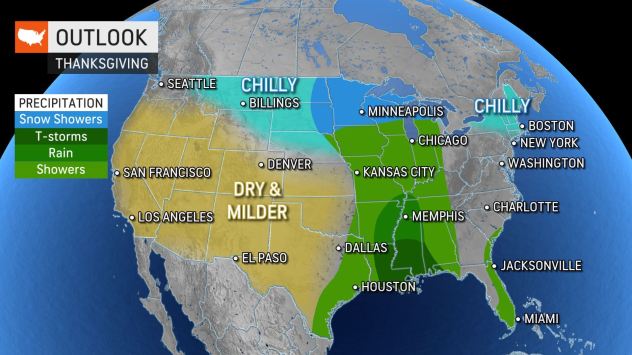 AccuWeather meteorologists say that conditions will begin to deteriorate across the Northeast after the holiday.

"While the days leading up to Thanksgiving and the holiday itself are expected to feature largely dry conditions across the mid-Atlantic and Northeast, conditions may quickly change as holiday shoppers head out in search of deals next Friday," AccuWeather Meteorologist Brandon Buckingham said.

By this point, a piece of the storm may break off and contribute to a new low pressure system that could bring enhanced precipitation to the Northeast coast.

Mild air will build ahead of the storm and erase the harsh cold that has been more akin to the middle of winter of late. 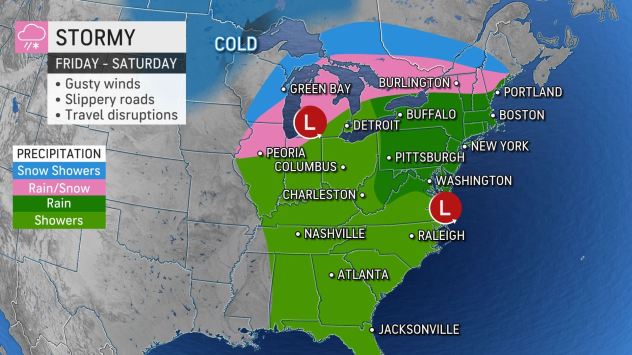 As a result, the corridor from Washington, D.C., to Boston may just receive rain from the storm. The rain could even expand as far inland as western New York, which received epic amounts of lake-effect snow in recent days.

Should the scenario pan out that interior areas get a thorough soaking, AccuWeather Senior Meteorologist Tyler Roys noted another potential hazard.

"For areas that got significant snow off the eastern Great Lakes, any rain is going to make the snow heavier and could greatly increase the threat for roof collapses beyond what the risk already is," Roys said. 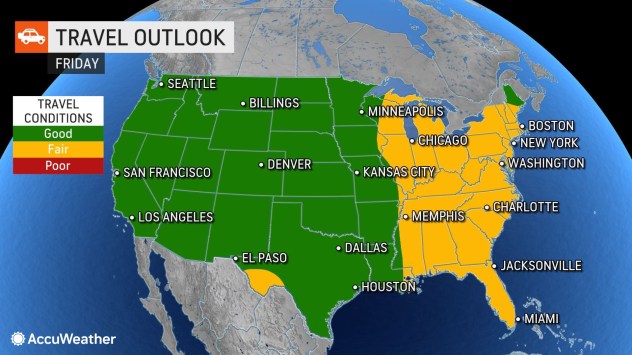 "At this time, the likeliest corridor for wintry weather would likely reside across interior New England and on the back side of the storm in the Midwest and Great Lakes," Buckingham said.

Even areas that do not face significant impacts from precipitation could endure gusty winds late next week that could add extra turbulence to flights across the eastern half of the nation and require motorists to keep a firm grip on the steering wheel.

AccuWeather meteorologists say that yet another burst of lake-effect snow may follow this storm next weekend.