From a visiting comet to a pair of meteor showers, here are the top astronomy events for the month of July!

Hot and humid summer days are often followed by warm nights, comfortable weather conditions for stargazers hoping to set up a telescope, watch the International Space Station fly overhead or just sit back and gaze at the stars. This year is no exception with July offering a slate of astronomical sights for young stargazers, those experienced with a telescope and everyone in between.

In addition to the list of upcoming astronomical happenings, July is one of the best months of the year to view the Milky Way. During the month, the side of the Earth that is experiencing night is pointed toward the heart of the Milky Way with the galaxy visible throughout most of the night. 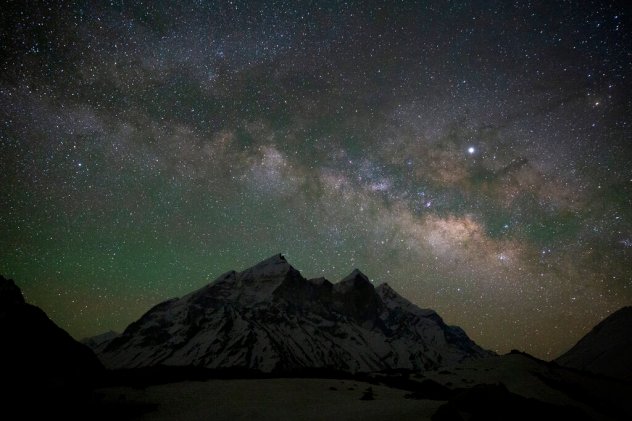 The Milky Way glows above the 6,856-meter-tall Bhagirathi peaks as seen from Tapovan, at an altitude of 4,500 meters in the northern Indian state of Uttarakhand, Friday, May 10, 2019. (AP Photo/Altaf Qadri)

The caveat to seeing this celestial spectacle is that it may require some travel as light pollution has made it impossible for 80% of Americans to see the Milky Way from their neighborhood.

The best time to plan a trip to a dark area to see the Milky Way is around the time of the new moon, which occurs during the final week of July.

While the Milky Way can be seen almost nightly from a dark area on a clear night, some sights can be spotted only on certain nights of the month. From a supermoon to shooting stars, here are the top astronomy events to mark on your calendar in July:

Supermoons are among the most popular full moons of the year, and the second of three consecutive supermoons will rise on Wednesday, July 13.

The first supermoon of 2022 rose in mid-June, kicking off supermoon season in the night sky. After July, the third and final supermoon will rise during the second week of August. 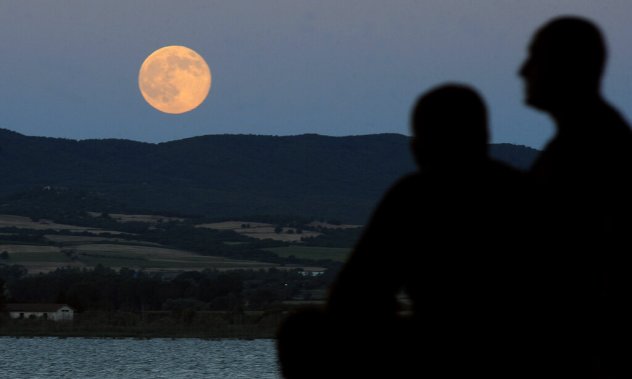 In addition to being a supermoon, July's full moon is also known as the Thunder Moon due to the thunderstorms that often rumble throughout the summer months.

The rare chance to spot a comet in the night sky will come this month, although a telescope will be needed to see the distant object as it slowly makes its way through the solar system.

Comet C/2017 K2 (PanSTARRS) will make its closest approach to Earth on July 14, 2022, at a distance of 168 million miles, according to EarthSky. While this is nearly twice as far away as the sun, Comet PanSTARRS is larger than most comets, helping it appear bright enough to see through the lens of a telescope.

This new comet is not expected to be as bright as Comet NEOWISE, which dazzled skywatchers in July of 2020 when it was bright enough to see with the naked eye. Instead, it will look like a fuzzy green blur through the lens of a telescope, standing out among a sea of twinkling white stars. 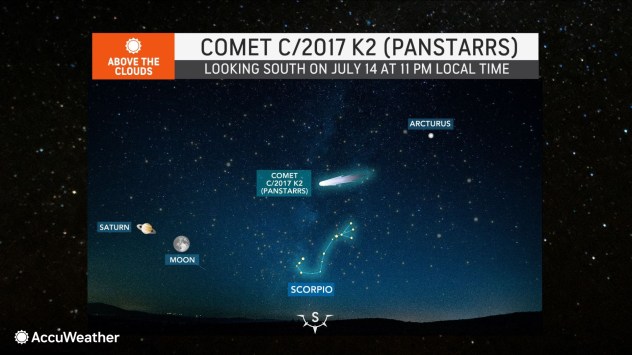 Image not to scale. Comet PanSTARRS will not appear as big or bright as it is shown above. (AccuWeather)

To see Comet PanSTARRS, telescopes will need to be pointed toward the southern sky above the constellation Scorpius. On the night of July 14 around 11 p.m. local time, it will appear about halfway between the bright star Arcturus and Saturn.

If cloudy conditions prevail on July 14, the comet should be visible in the same area of the sky throughout the rest of the month.

July will start with fireworks during Independence Day celebrations and will end with the astronomical version of fireworks as two meteor showers peak less than 48 hours apart.

The dueling meteor showers will be active on both nights, combining for 10 to 20 meteors per hour in dark, cloud-free areas.

Typically, these are the first meteor showers since the Eta Aquarids in early May, but this year, a surprise meteor shower put on a brief but impressive show over Memorial Day weekend.

While 20 meteors per hour translate to one shooting star every few minutes, there could be some eye-popping sparks in the sky thanks to the Alpha Capricornids.

According to the AMS, the Alpha Capricornid event is known for fireballs, incredibly bright meteors that can flicker brighter than every star in the sky for a few brief seconds.

Meteors or fireballs can appear in any area of the sky, so it is best to sit back and view as much of the sky as possible for the best shot at spotting a shooting star. This can be as simple as laying a blanket out in the yard or relaxing in a zero-gravity chair.