The remnants of a broken comet could collide with the Earth to create a brief but intense meteor shower, but astronomers say that it's not a guarantee. Also not a guarantee: that the weather will make conditions just right for viewing.

Earth is potentially on a collision course with the remnants of a shattered comet. If it stays the course, it could spark a rare astronomy event known as a meteor storm.

Meteor showers are among the most enjoyable astronomy events with shooting stars streaking through the sky as Earth plows through a field of debris left behind by a comet. Most meteor showers throughout the year are predictable, but the end of Memorial Day weekend will bring a celestial wild card that could outshine every other meteor shower of 2022. Or it may not.

On Monday night into Tuesday morning, the Earth may cross paths with the remnants of comet 73P/Schwassmann-Wachmann (SW3), a defunct comet that broke apart in 1995.

After SW3 splintered into countless pieces nearly three decades ago, debris from the breakup could intersect the Earth at the end of Memorial Day weekend. If this comes to fruition, it could spark a brief but intense meteor shower over North America. 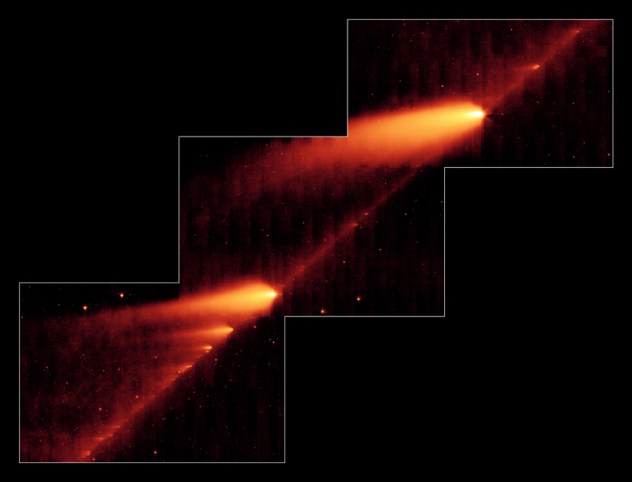 An image of comet 73P/Schwassmann-Wachmann taken by the Spitzer Space Telescope taken 11 years after it broke apart. (NASA)

The viewing window for the potential meteor storm is anticipated to last only about 30 minutes, spanning from 12:45 to 1:17 a.m. EDT on Tuesday, May 31, according to the American Meteor Society (AMS).

"We believe that this event has a chance of being something spectacular," the AMS explained on its website. "When viewing events such as these, one should expect nothing extraordinary to happen but certainly hope for the best!"

A rare meteor outburst is possible if the Earth encounters a rich field of debris from the comet, although the number of meteors visible is still uncertain. EarthSky said that if it evolves into a true meteor storm, it could be on par with the famous Leonid meteor storm of 1966 when there were as many as 40 meteors per second.

However, the event could be a dud if the cloud of fragments from SW3 miss the Earth. 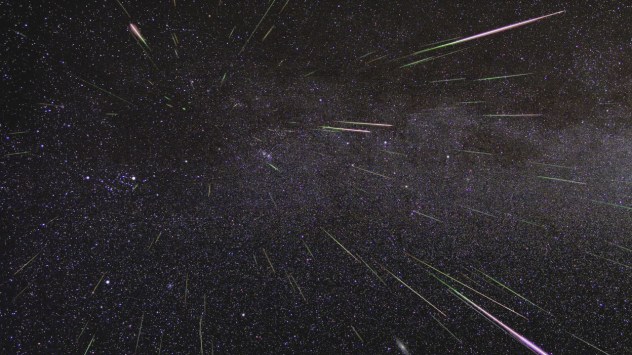 A time-lapse image of a meteor shower showing dozens of meteors lighting up the sky. (NASA/JPL)

Meteor storms are rare and can be difficult to predict with precision, so folks hoping to see the show should head outside well before the anticipated start time of 12:45 a.m. EDT on Tuesday.

"Start your viewing session at least an hour prior to the time of the expected outburst, just in case the predictions are off," the AMS said. "This will also allow your eyes to be fully adjusted to the dark surroundings."

It is important to let your eyes adjust to the dark for this meteor shower as the meteors could be rather faint when compared to other meteor showers throughout the year. To preserve your night vision, avoid looking at any light sources while skywatching, such as a cell phone screen or a streetlight.

However, it will be important to look at your phone before heading outside to check the cloud cover forecast on the free AccuWeather app.

Favorable weather is predicted for around half of the United States on Monday night with mainly cloud-free conditions expected from Southern California to parts of the Ohio Valley and mid-Atlantic. 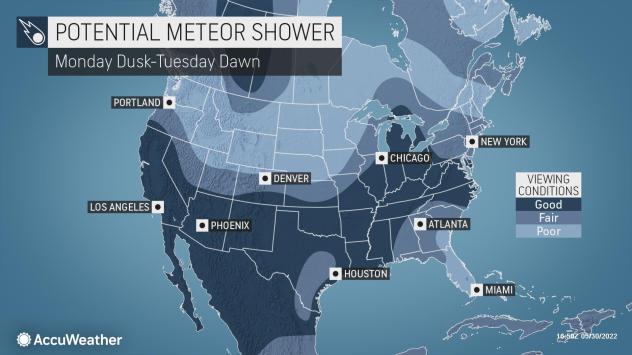 Clouds will be a concern for folks hoping to catch a glimpse of the potential meteor storm over areas of the Southeast and New England, as well as across the northern Plains and parts of the Pacific Northwest. Clouds will also be an issue for most of Canada, although some breaks over southern Ontario or east of the Canadian Rockies could be enough to see part of the show if the meteor storm comes to fruition.

After Memorial Day weekend, the next chance to watch a meteor shower will not occur for another two months, although it will be a far cry from an all-out meteor storm.

Two meteor showers, the Southern delta Aquarids and the alpha Capricornids, will reach their peak on the final nights of July. The two will join forces to produce around 20 meteors per hour, including the chance to spot incredibly bright meteors known as fireballs.