A rare opportunity to glimpse the Aurora Borealis in parts of the northern U.S. is expected this weekend -- at least where cloud-free conditions are forecast. 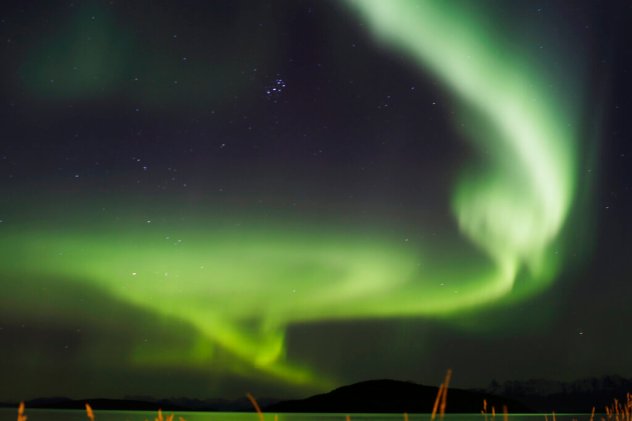 This isn’t a trick. The sun is about to treat skywatchers to a dazzling display of the Northern Lights this weekend, one of the best opportunities to see the aurora so far in 2021.

A major X-class solar flare erupted on the sun on Thursday, hurling charged particles into space toward the Earth. This event is known as a Coronal Mass Ejection (CME), and when it reaches the Earth, it interacts with the planet’s magnetic field to create awe-inspiring colors in the night sky.

The aurora is typically limited to areas near the north and south poles, but when a bigger CME occurs, like the one this week, the aurora can be seen glowing in the sky farther south, including parts of the contiguous United States and northern Europe. 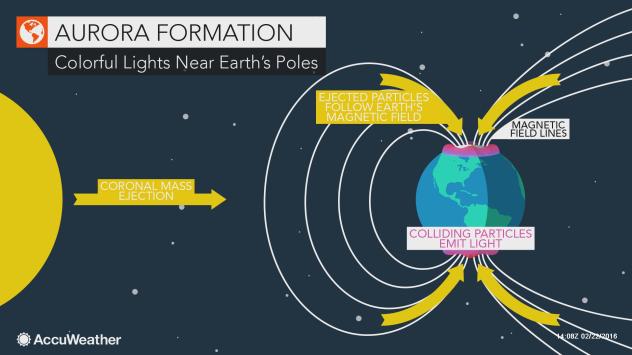 The best of the Aurora Borealis is predicted to glow the night before Halloween, sometimes referred to as Mischief Night.

According to NOAA’s Space Weather Prediction Center (SWPC), a “strong” geomagnetic storm will arrive on Saturday, Oct. 30, and will continue into Halloween. This means that the best opportunity to see the aurora will be on Saturday night, although the storm could potentially linger into Sunday night.

When solar storms of this magnitude occur, the glow of the aurora is typically seen over New England, across the north-central U.S. and parts of the Pacific Northwest. However, clouds could disappoint people hoping to see the celestial lights for the first time. 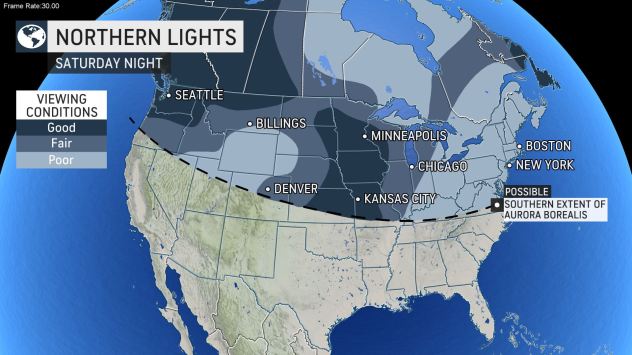 The best weather conditions on Saturday night are predicted to be across part of the Midwest, the central Plains, the northern Rockies and Canadian Rockies. People living in these areas should head to a dark area away from populated areas where light pollution could outshine the glow of the aurora.

Folks across the Northeast and Ohio Valley are unlikely to see the aurora due to a slow-moving storm swirling over the region with rain and widespread clouds.

Disruptive clouds are also in the forecast for part of the central Rockies and High Plains, as well as across the border in the eastern Canadian Prairies and much of Ontario and Quebec.

When large solar storms hit the Earth, they can do more than just spark the aurora in the sky.

This was the case on Halloween in 2003 when a series of major solar flares triggered one of the most impressive solar storms in recent history. During the Halloween solar storms of 2003, people as far south as Florida witnessed the eerie glow of the Aurora Borealis on the northern horizon, according to NASA.

“The effects of these storms were ghoulish enough that [aircraft controllers] had to re-route aircraft, it affected satellite systems and communications, and it also caused a power outage in Sweden for about an hour," said Dr. Holly Gilbert, a solar scientist at NASA's Goddard Space Flight Center in Greenbelt, Maryland.

A repeat of that 2003 event is not expected with the impending solar storm, but the SWPC said that there could be some interference with radio and navigation equipment and false alarms with some power systems.

This week’s X-class solar flare was the strongest solar flare on the sun since July 3, 2021. That flare also produced a CME, but it was directed away from the Earth, leaving firework displays as the only light show in the sky on Independence Day.

More events like these will be possible in the coming years as the sun enters a period known as the solar maximum.