AccuWeather forecasters say a major storm could produce tornadoes and blizzard conditions in central US next week. Get the details.

Extensive planning goes into every launch, but all of the hard work by countless people can be derailed at the last second by Mother Nature, forcing a highly-anticipated launch to be postponed.

Weather obstacles to dodge for a successful rocket launch

Rocket launches are amazing to watch, but they're also at the mercy of the weather. Here's how NASA and SpaceX deals with inclement weather prior to launch.

The countdown reaches zero, the roar of engines fills the air and a SpaceX Falcon 9 rocket takes to the sky on its journey to space, but this spectacle cannot take place unless everything goes perfectly, including the weather.

Extensive planning goes into every launch, but all of the hard work by countless people can be derailed at the last second by Mother Nature, forcing a highly-anticipated launch to be postponed.

Forecasting duties are handled by the Space Launch Delta 45, part of the United States Space Force, with meteorologists that meticulously go over every aspect of the weather to ensure that a launch can be conducted safely. 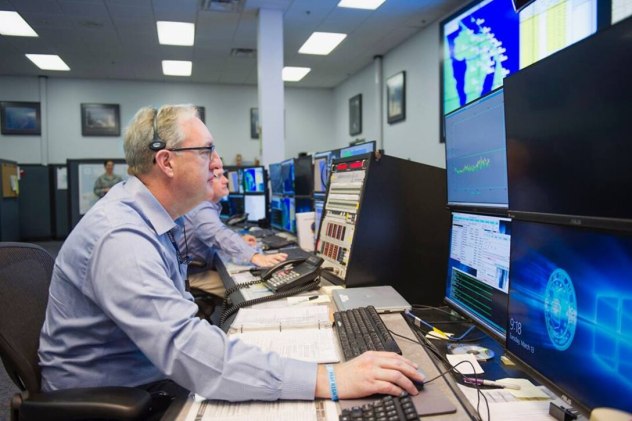 The weather criteria are slightly different for every rocket but are all curated with safety in mind. A few extra weather precautions are taken into account when a rocket is launching a crewed spacecraft.

Here are the types of weather that can delay a SpaceX rocket launch.

Florida is sometimes called the lightning capital of the United States, and for good reason. Thunderstorms can pop up at virtually any time of the year, posing a major issue when it comes to launching rockets through the atmosphere.

A rocket is like a lightning rod flying through the sky, and a lightning strike could be catastrophic. Even if it doesn’t trigger the rocket to explode, a bolt can damage computers or another crucial system onboard.

Apollo 12, the second mission to the surface of the moon, almost had to abort the mission 36 seconds after liftoff when the Saturn V rocket was struck by lightning. Fortunately, swift thinking by mission control allowed the crew to circumvent the issues caused by the lightning, allowing a successful trip to the moon.

Falcon 9 with Dragon #spaceX #dm1 shadow on the haze and lightning in the distance @considercosmos pic.twitter.com/ZgzUl81jEy

The rules for launching rockets are similar to the rules adopted by many outdoor sporting venues, such as football stadiums or golf courses.

Launch of the rocket is not permitted if there has been a lightning strike within 10 nautical miles of the launch pad within the past 30 minutes, according to NASA. Additionally, a rocket will remain grounded if a thunderstorm’s anvil cloud is in the area. 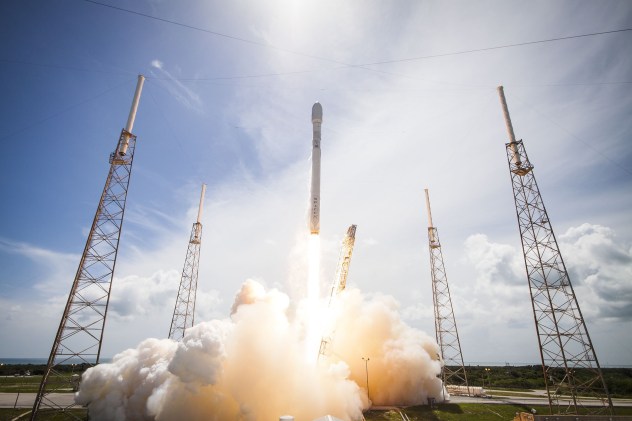 A SpaceX Falcon 9 rocket seconds after liftoff. The four towers at the launch pad are lightning rods to protect the rocket if a thunderstorm moves over the launch pad. (SpaceX-Imagery)

Even if no lightning has been detected in the area, the risk of lightning could still cause a delay.

Instruments stationed all around Cape Canaveral measure the amount of electricity in the atmosphere, and if the readings are high enough, launching a rocket can trigger a lightning strike.

“A launch vehicle and its plume ascending through clouds can trigger lightning at lower electrical fields than required for natural lightning,” NASA explained. “That's because the vehicle and the plume act as conductors and decrease the electrical field strength necessary to create a lightning flash.”

It could be a bright, sunny day at Cape Canaveral, but the weather could still stop a SpaceX launch well before the countdown hits zero.

If the winds are too fast, it can force a launch to be postponed. Strong winds can disrupt a rocket that is racing through the atmosphere, both at the launchpad and miles above the ground.

At the launch pad, sustained winds cannot exceed 30 mph. Even if winds are just below this limit at 29 mph, the launch may be delayed out of an abundance of caution.

At higher levels of the atmosphere, there is a phenomenon known as wind shear that forecasters must monitor.

Wind shear is the change in winds through different layers of the atmosphere, so if there is a big difference in wind speeds over a short distance, it can disrupt the path of the rocket.

It is also one of the biggest factors in the development of tropical systems.

With SpaceX now launching humans into space, both for NASA or for a private crew of civilians, there are more weather conditions that need to be taken into account before the engines of the Falcon 9 rocket ignite.

The weather conditions at the launch pad can be perfect, but in the event that the crew needs to abort the launch before reaching space, the weather downrange needs to be clear.

Crewed launches lift off from Florida’s east coast and travel eastward over the Atlantic Ocean, so more factors need to be taken into account beyond lightning and wind.

The height of waves needs to be considered along the rocket’s projected path, so that if the crew aborts, they splash down in a calm ocean and not a turbulent ocean near a storm or a hurricane.

“Downrange weather is monitored at more than 50 locations along the ascent track along the North American Eastern Seaboard and across the North Atlantic,” NASA explained. 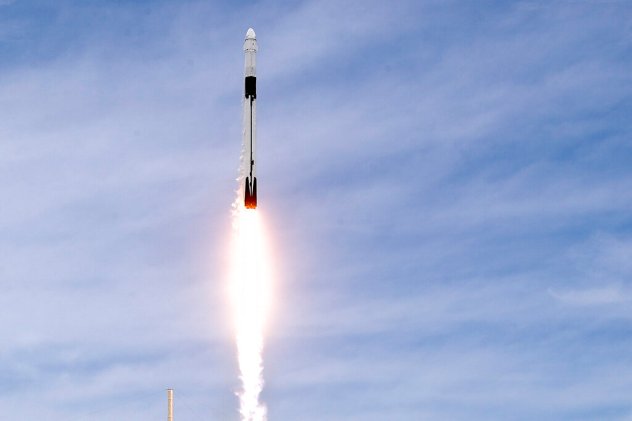 A SpaceX Falcon 9 rocket with a Dragon 2 spacecraft lifts off on pad 39A at the Kennedy Space Center for a re-supply mission to the International Space Station from Cape Canaveral, Fla., Thursday, June 3, 2021. (AP Photo/John Raoux)

SpaceX also prefers calm weather downrange for when the company attempts to land and recover the first stage of its Falcon 9 rocket on a floating platform in the middle of the ocean.

The launch can be a success without the landing going smoothly, but being able to recover, refurbish and reuse this part of the rocket helps the company save money and reduce its impact on the environment.