Why does NASA launch rockets from Cape Canaveral, Florida?

For over 60 years, NASA has been launching rockets from Cape Canaveral, Florida, but this has not always been the primary launch site for the United States.

Cape Canaveral was not the first choice by the United States when they began launching rockets, and the weather may have been an influence in that decision.

The weather does not always cooperate for rocket launches as more thunderstorms erupt in Florida per year than in any other state.

Lightning from thunderstorms can be catastrophic to a rocket if it strikes in mid flight. In 1987, lightning struck the AC-67 rocket less than a minute after liftoff, causing it to explode.

Despite the threat of thunderstorms and hurricanes, NASA still uses this as their main launch facility for two main reasons highlighted below. 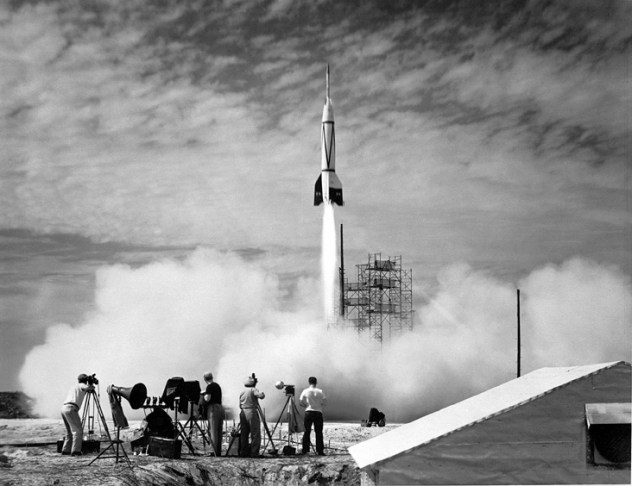 1. Proximity to the ocean

Some of the first American rockets were launched in the 1940s far away from Florida at the White Sands Missile Range, located in the desert of New Mexico.

It was here where the United States launched its first rocket powerful enough to climb more than 62 miles (100 km) above the Earth’s surface, the boundary that marks the official start of outer space.

This part of New Mexico is a remote location where small rockets could be launched and later recovered after crashing in the desert.

However, as rockets grew in size and started to travel farther than ever before, the United States needed to find a new launch site where rockets could launch and travel safely over unpopulated areas.

The United States decided to move their large rocket launching operation to Cape Canaveral, Florida, and on July 24, 1950, the first of thousands of rockets launched from the facility.

Cape Canaveral is located along the East Coast of the United States so rockets can be safely launched to the east over the open waters of the Atlantic Ocean.

If there is an issue with the rocket after liftoff, space flight operators can safely put it down in the Atlantic Ocean without endangering the public.

Modern day rockets also are comprised of multiple stages. When one stage runs out of fuel, it can be shed from the rocket and fall into the ocean without harm.

SpaceX has taken advantage of this, sending a floating platform out in the Atlantic Ocean where the first stage of their Falcon 9 rocket can land after sending its payload into space.

Falcon 9 first stage on our droneship in the Atlantic after propelling the Dragon spacecraft to the @Space_Station pic.twitter.com/Cnnej7zEnt

NASA has a few other operational launch sites, including Wallops Island, Virginia, and Vandenberg Air Force Base, California. All of these are located along the ocean, so the rockets can travel over the open water.

2. Speed boost from the Earth’s rotation

The second reason why the United States uses Cape Canaveral as its primary launch site is due to its proximity to the equator.

“The west-to-east rotation of the Earth causes all points on Earth (except the poles themselves) to move eastward with some velocity,” NASA said.

This eastward velocity is greatest at the equator with the Earth rotating at a speed of roughly 1,040 mph. This rotational speed decreases as objects move closer to the poles, reaching zero for objects directly over one of the poles.

NASA takes advantage of Earth’s natural rotation by launching toward the east from Cape Canaveral.

The speed at which the Earth rotates at Cape Canaveral is roughly 914 mph, helping to give rockets some extra speed to reach their destination.

While it is not impossible to launch rockets from the higher latitudes, the extra speed boost from the Earth’s rotation saves on fuel that would be used to help the rocket achieve the proper speed.

A rocket launching from Florida can send a heavier spacecraft or satellite into space.

The extra speed from Earth’s rotation is one of the reasons why the European Space Agency (ESA) launches its rockets from the French Guiana, which is located close to the equator.

NASA plans to continue to use Cape Canaveral in the future as its primary launch site in the future for its new upcoming rocket, the Space Launch System.

Companies such as SpaceX and Blue Origin are also building larger rocket facilities in Florida to safely launch their future rockets.