Scientists announced a strange object approaching Earth from the farthest region of the solar system, the Oort Cloud. At first glance, scientists believe it to be a massive comet.

A comet unlike any other in recorded history is on a trajectory to zip through the inner solar system in less than a decade, but like most space rocks that make the news, it isn’t anything to lose sleep over.

Comet 2014 UN271 was observed during a mission called the Dark Energy Survey back in 2014, but skywatchers didn’t realize that the data gathered was showing a comet until mid-June of this year.

Pedro Bernardelli and Gary Bernstein were the two people who made this realization, giving Comet 2014 UN271 a name that rolls off the tongue a bit easier: Comet Bernardinelli-Bernstein.

This discovery could be one for the record books, leading some to call it a “mega comet.” It is estimated to be between 60 and 230 miles wide, which could make it the largest comet ever discovered, EarthSky said.

To put the size in context, Halley’s Comet is about 3.5 miles wide, Long Island is 118 miles long and part of the Florida peninsula is 160 miles across.

Despite the size, this comet is nothing for people on Earth to worry about, but there is the chance that it could put on a show in the sky on its first trip to the inner solar system in millions of years.

A bad day would be an understatement if a space rocket of this size was on a collision course with Earth and slammed into the land.

The asteroid that is thought to have been a factor in the extinction of the dinosaurs was estimated to be about seven miles wide when it hit Mexico’s Yucatan Peninsula, creating a crater that was 125 miles wide, according to EarthSky.

A space rock the size of Comet Bernardinelli-Bernstein hitting land would be orders of magnitude worse with impacts on a global scale and shifts in the climate. If the rock missed land and splashed down in the ocean instead, it could generate a tsunami.

Rest assured, there is a 0% chance of these scenarios unfolding in 2031 when the comet makes its closest approach to the sun, according to data from NASA.

This animation shows the anticipated path that Comet 2014 UN271 will take as it passes through the inner solar system. (Image/NASA JPL)

Comet Bernardinelli-Bernstein is already closer to the sun than Neptune, but it will not even reach the orbit of Saturn in 2031 before it starts its long journey back to the far reaches of the solar system.

Given current projections, a telescope will be needed to spot the gigantic comet in the sky since it will remain far away from the Earth, but it could still surprise onlookers in 2031.

Comets are known for being unpredictable when it comes to their brightness. Given the size of this comet and how little is known about it so far, it could end up exceeding expectations and putting on a show for stargazers.

When is the next solar eclipse in the US?
Astronomers find 'blinking giant' star at the center of the Milky Way
NASA will launch first U.S. missions to Venus since 1989

Comet NEOWISE was the most recent comet that was visible in the sky during the summer of 2020.

Two other comets preceded Comet NEOWISE in the first half of 2020 and were initially projected to be bright enough to see from Earth without a telescope, but they both fizzled to the disappointment of stargazers. 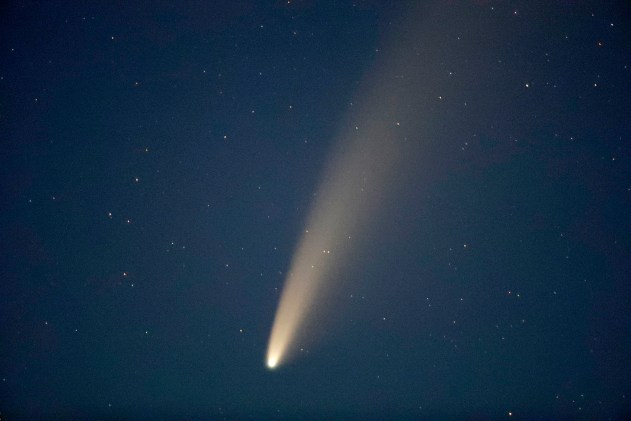 Long-period comets like Comet Bernardinelli-Bernstein likely originate from the Oort Cloud, the most distant region of the solar system more than 100 million miles away from the sun, NASA said.

Since the rocks are so incredibly far away from the Earth, they are almost impossible to see until they are making their final approach to the inner solar system, even with the largest telescopes available.

This means that astronomers do not know when exactly the next long-period comet will fly through the solar system until it is nearing its closest approach to the sun.

Other comets that orbit the sun more frequently are easier to predict, such as Halley’s Comet. This is a shorter-period comet that orbits the sun once every 75 years and is slated to glow in the sky again in 2061.