After years of storage, the Apollo Mission Control Center was renovated to its former glory just in time for the 50th anniversary of the moon landing.

It was a rainy November day in Florida as three astronauts began mankind’s second voyage to the surface of the moon, but the mission almost ended in tragedy just 36 seconds after liftoff.

Apollo 12 launched on Nov. 14, 1969, at 11:22 a.m. EST, carrying astronauts Pete Conrad, Alan Bean and Richard Gordon. This was less than four months after the launch of Apollo 11 when Neil Armstrong, Buzz Aldrin and Michael Collins made history during their voyage to the moon.

The mission was the same — fly men to the moon and have them return home safely. However, the weather during the launch of Apollo 12 was significantly different and almost spelled disaster for the mammoth Saturn V rocket and the three crew members.

Unsettled weather arrived at Cape Canaveral ahead of the launch of Apollo 12 as meteorologists monitored the weather system very closely in the final hours before the engines of the Saturn V rocket roared to life.

“We have a new weather forecast just came in,” the Public Affairs Officer (PAO) announced just under nine hours before liftoff. “The front, which began passing through here late yesterday, and it’s been here since that time, has slowed down somewhat and is not expected to now move through by launch time as was earlier predicted. However, this is not going to be a constraint to launch as presently viewed.”

Subsequent weather updates leading up to the launch emphasized the poor weather prospects ahead of the morning launch. “All aspects of the flight, with the exception of weather, looking very good,“ the PAO said.

“Obviously, if the front was more severe, with lightning involved, the crew would be removed,” the PAO stated with 39 minutes left until liftoff.

The Saturn V rocket on the launchpad at night. (NASA)

Although there was no lightning detected leading up to the launch, that would change just seconds after liftoff.

Despite the wet weather conditions, the five engines of the mighty Saturn V rocket sparked to life and the crew of Apollo 12 started its journey to the moon right on schedule at 11:22 a.m. EST.

President Richard Nixon was one of thousands of people in attendance that morning to witness the launch, although onlookers couldn’t see much as the rocket quickly disappeared into the thick clouds just above the ground. 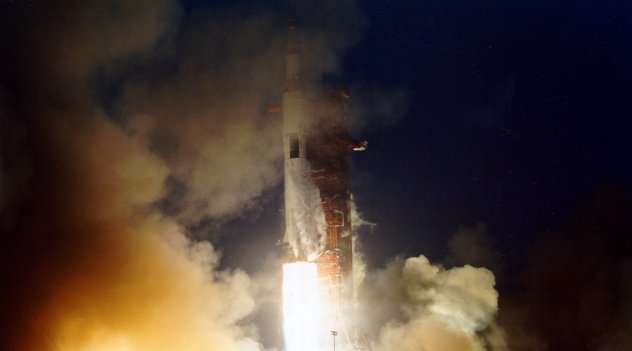 The Apollo 12 Saturn V rises from the pad. The tail of the rocket has reached about the midpoint of the tower. 14 November 1969. (Image/NASA)

Thirty-six seconds into the flight, everything changed as a bolt of lightning struck the rocket.

“What the hell was that?” Gordon remarked immediately after the strike. “I lost a whole bunch of stuff; I don’t know …”

Gordon, Conrad and Bean began to describe to mission control all of the lights that they were seeing on the main display console in the spacecraft, unaware that they had just been struck by lightning.

Immediately, spacecraft communicator (CAPCOM) Gerald Carr told the crew to move into ‘Abort Mode I-Bravo’ in case the astronauts needed to abort the mission because of the issues that they were experiencing.

Amid the chaos, another lightning bolt struck the rocket, just 12 seconds after the first strike.

The type of lightning that hit the Saturn V rocket was different than the typical lightning during a thunderstorm and is known as "triggered lightning." This is because the lightning was triggered by the rocket itself.

“A launch vehicle and its plume ascending through clouds can trigger lightning at lower electrical fields than required for natural lightning,” NASA explained. “That's because the vehicle and the plume act as conductors and decrease the electrical field strength necessary to create a lightning flash.” 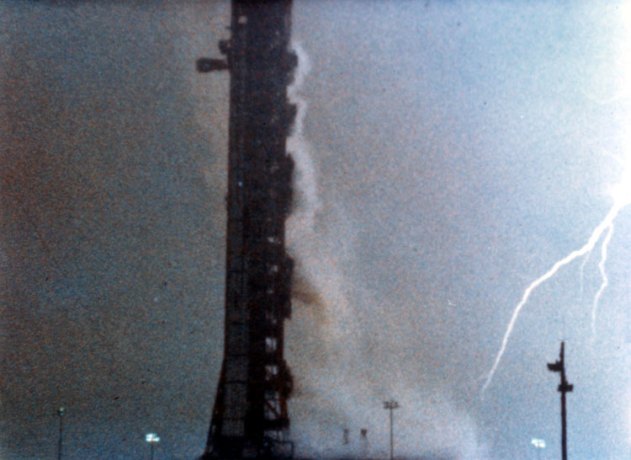 View of a lightning bolt during the launch of the Apollo 12 Pad A, Launch Complex 39, Kennedy Space Center on Nov. 14, 1969. The silhouetted structure is the mobile launch tower. This electrical discharge between clouds and the ground took place at about 36.5 seconds after lift-off when the Apollo 12 space vehicle was at about 6,000 feet altitude. (Image/NASA)

The rocket continued to gain speed and climb higher in the atmosphere as the crew frantically tried to restore the main display console back to normal.

One minute after the first lightning strike, Carr told the astronauts, “Try SCE to Auxiliary.”

“What the hell is that?” Conrad replied.

The seemingly obscure command puzzled Conrad, but the crew was able to find the switch that turned the Signal Conditioning Electronics (SCE) to its auxiliary (AUX) unit. This miraculously fixed all of the issues.

The command “SCE to Auxiliary” that saved the mission was suggested by John Aaron, a young NASA engineer responsible for the electrical, environmental and communications (EECOM) systems.

Aaron recognized the "garbled" data from a past simulation and knew what needed to be done to fix the issues.

“I happened to be on the third shift one night watching a test of the Command Module that they were performing at Kennedy, and due to the fact that the operators on the third shift at Kennedy were not all that — you know, they weren't the A Team — they had gotten themselves in a sequence where they dropped power on the vehicle,” Aaron said during an interview in 2000.

“Well, never thinking that when lightning struck the vehicle on Apollo 12, that exact pattern showed up,” Arron said. “So it wasn't that I understood exactly what had happened, I recognized a pattern and how to get out of it."

Apollo 12 was saved not only by Aaron’s knowledge of how to fix the issue but also by a bit of luck.

“Now, it was not only luck that at a pad test I saw that, an inappropriate sequence was being executed in a pad test; it was also the luck that it would happen during the launch phase and that I was the flight controller,” Aaron added. “If you had had any other EECOM there, they didn't see that pattern.”

Once the issues had been resolved, the crew was able to focus on the rest of the launch and continue their mission to the moon. A few of them even laughed once everything had calmed down.

“Now we'll straighten out our problems here. I don't know what happened; I'm not sure we didn't get hit by lightning,” Conrad said almost three minutes into the flight.

“Think we need to do a little more all-weather testing,” Conrad added. 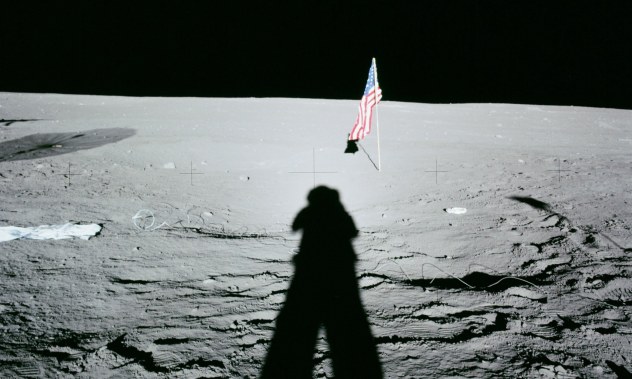 Pete Conrad's shadow next to the American flag planted on the surface of the moon. (Image/NASA)

The rest of the mission went smoothly with a successful landing on the moon and a return to Earth.

There was some concern that the lightning strike could have damaged the mechanism that released the parachutes after reentering the Earth’s atmosphere, but the parachutes functioned properly and the crew safely splashed down in the Pacific Ocean on Nov. 24, 1969. 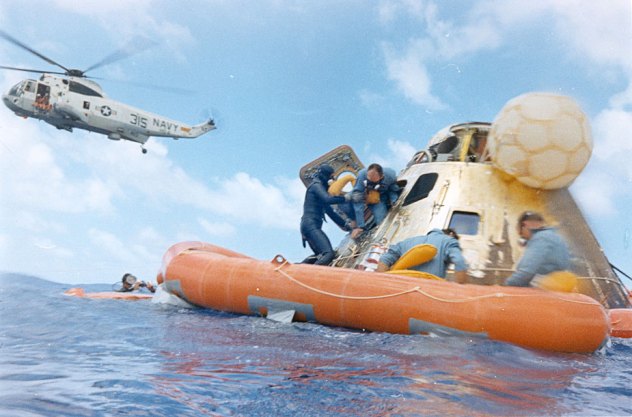 Other rockets that had a brush with Mother Nature

While Apollo 12 may have narrowly avoided disaster from lightning strikes, other rockets have not been as fortunate.

“In 1987, an Atlas-Centaur rocket and its payload were destroyed when the launch of the vehicle triggered lightning,“ NASA said. Luckily, this was an uncrewed mission.

“That mishap led to the formation of the Lightning Advisory Panel,” NASA added. “The panel then developed rules, used today by the U.S. space program, that determines when a launch must be scrubbed because of weather conditions.”

More recently, on May 27, 2019, a Russian Soyuz rocket launching a navigation satellite into orbit around the Earth was struck by lightning shortly after liftoff. The rocket was unscathed and was able to deliver the satellite to its intended orbit where it was reported to be functioning normally. 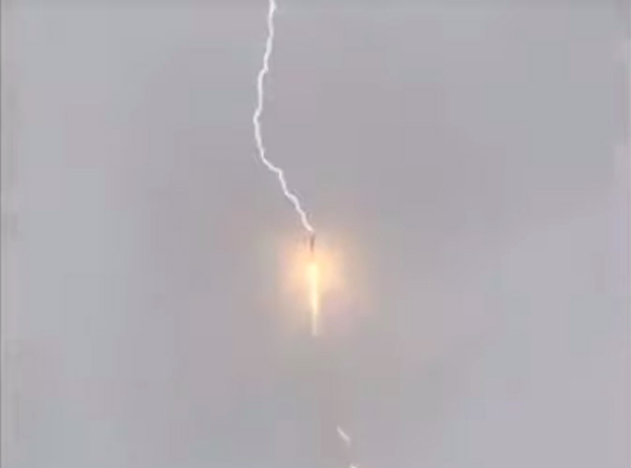 A Russian Soyuz 2.1b rocket is struck by lightning as it launches a Glonass-M navigation satellite into orbit from Plesetsk Cosmodrome on May 27, 2019. (Image: © Roscosmos/Dmitry Rogozin via Twitter)