An annular solar eclipse will be visible from Oregon to Texas, but you need to be at the right place at the right time to see it. Here are the top travel destinations for viewing the celestial alignment on Oct. 14, 2023.

Life changing. Spiritual. Better than any photo. These were the phrases used to describe the most recent total solar eclipse over the United States, and the cosmos are about to align again in spectacular fashion with two types of solar eclipses taking place over the U.S., just 177 days apart from each other.

The first eclipse on the docket, an annular eclipse, will take place on Saturday, Oct. 14, 2023, and will be visible from Oregon to Texas. Included in the path of that eclipse will be major cities, Native American reservations, national parks and sections of cross-country highways. This will be followed up by a total solar eclipse on April 8, 2024, that will be visible over Mexico, the eastern U.S. and eastern Canada. 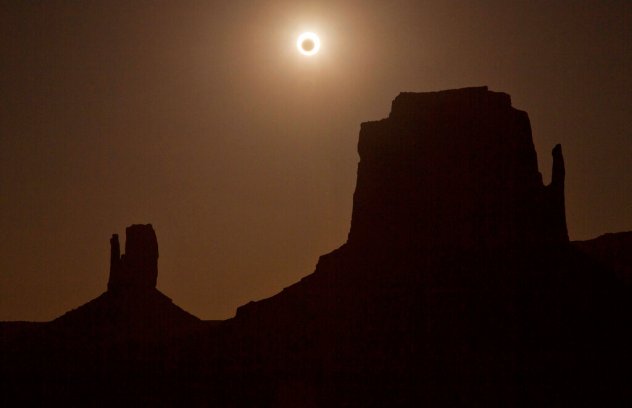 The new moon crosses in front of the sun creating an annular eclipse over West Mitten, left, and East Mitten buttes, Sunday, May 20, 2012, in Monument Valley, Ariz. (AP Photo/Julie Jacobson)

A solar eclipse occurs when the moon passes directly between the sun and the Earth, casting its shadow toward the planet.

This ring of light is known as the annulus, but in the age of social media, it has been given the unofficial nickname of a "ring of fire." The viral nickname can be deceiving since it will not appear like the moon is on fire but rather outlined in a halo of light.

"You MUST use solar glasses for your eyes and solar filters for your camera gear for the entire duration of the eclipse!" Telepun said of the 2023 eclipse. Not using proper eye protection can cause permanent eye damage.

Just as important as having the proper eyewear is being in the right spot at the right time on Oct. 14, 2023. During an annular solar eclipse, the best viewing locations are directly in the center of the path of the eclipse. In these areas, viewers will get to see the moon perfectly symmetrical over the face of the sun. In areas closer to the edge of the path, the moon will appear off-center of the sun.

People across North America who live in areas outside of the path will be able to witness a partial solar eclipse, as long as clouds do not blanket the sky.

From the mountains of Oregon to the coast of Texas, here are the top locations in the U.S. for viewing the annular solar eclipse on Oct. 14, 2023:

San Antonio is the biggest city in the path of the 2023 solar eclipse with the entire event visible from the city and many of its suburbs. The ease of traveling to a big city will make it a popular destination for eclipse chasers, but a slightly better show is anticipated in the coastal city of Corpus Christi, located 130 miles southeast of San Antonio.

"The 2023 annular eclipse has its most prolonged duration in Corpus Christi," Telepun explained, with the annular phase lasting around 5 minutes. This is slightly longer than San Antonio, where the height of the eclipse will last around 4 minutes and 20 seconds.

Only 90% of the sun will be blocked out by the moon in Corpus Christi, leaving 10% of the sunlight illuminating the Earth. "This is still very bright and may not trick animals into beginning their nighttime behaviors," Telepun added.

Other cities in Texas that are a short distance away from the zone where the annular eclipse will be visible include Houston, Austin, Lubbock and McAllen. 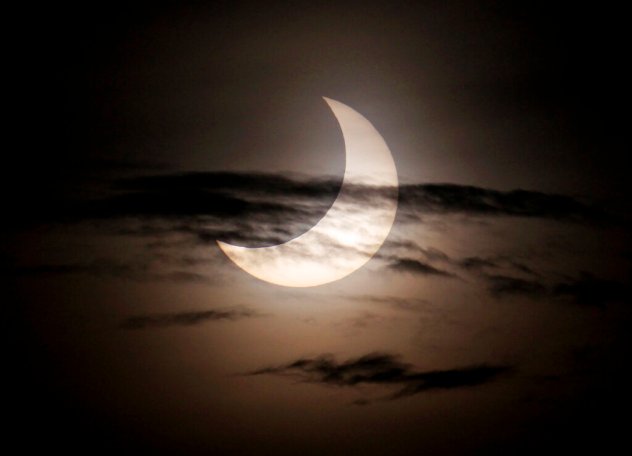 San Antonio is a unique location, as it will also be extremely close to the area where the total solar eclipse can be seen on April 8, 2024. However, the path of the 2024 eclipse will be just miles north and west of downtown San Antonio.

Over 40% of New Mexico will be in the path of the 2023 eclipse, and similar to Texas, residents of some of the state's most populated cities and towns won't have to travel to see the celestial spectacle.

Albuquerque is one of the prime viewing locations in the state, along with Santa Fe, Roswell, Farmington and Hobbs. Several Native American Reservations across northwestern New Mexico also fall in the track of the eclipse, including land owned by the Navajo Nation and the Jicarilla Apache Nation.

The weather in New Mexico throughout October makes it one of the most appealing destinations for viewing the 2023 eclipse.

From a climatological perspective, mid-October typically features dry conditions with limited cloud cover and precipitation across New Mexico, translating to a low chance that the weather will spoil the eclipse next October. However, there is still a chance that clouds could develop on the day of the eclipse.

Standing in four states at the same time is a bucket list item for people who dream of traveling across the U.S., and on Oct. 14, 2023, stargazers who visit the conjunction of Colorado, New Mexico, Arizona and Utah will get an experience unlike any other.

Four Corners Monument is the only place in the U.S. where four states intersect, and folks who visit the tourist destination on Oct. 14, 2023, will be able to briefly stand in four states while also being aligned with the cosmos. 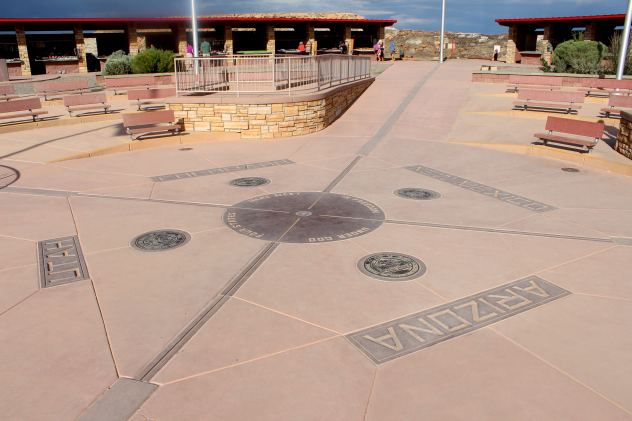 Utah is home to geological wonders that can leave first-time visitors in a state of awe, and the unique landscape will serve as a photogenic foreground for the 2023 eclipse.

Bryce Canyon National Park in south-central Utah is one of the most popular national parks in the path of the 2023 eclipse. Many of the campsites and hotels located near the park allow reservations to be made one year in advance, so people who plan on traveling to Bryce Canyon for the astronomical alignment are prepared. 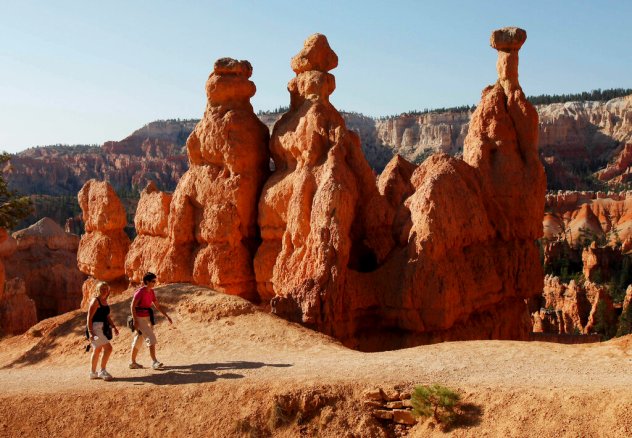 The sights in the sky at these parks won't end after the eclipse is over.

Many of the national parks across southern Utah, including Bryce Canyon, are designated as International Dark Sky Parks. This special certification means that they are home to some of the best stargazing conditions in the entire country with significantly darker skies than virtually anywhere east of the Rocky Mountains. People who stay up late on the night following the eclipse may see the faint glow of the Milky Way surrounded by countless stars, and perhaps even a few shooting stars associated with October's Orionid meteor shower.

Oregon residents will get the first chance to see the solar eclipse on Oct. 14, 2023, and people who head to the mountains for the event could witness the eclipse over the pristine blue waters of Crater Lake.

Traveling to Crater Lake National Park for the eclipse may end up being a day trip rather than a weekend getaway as many of the campsites around the park close for the season in late September or early October, but there are still some limited lodging options in the area. 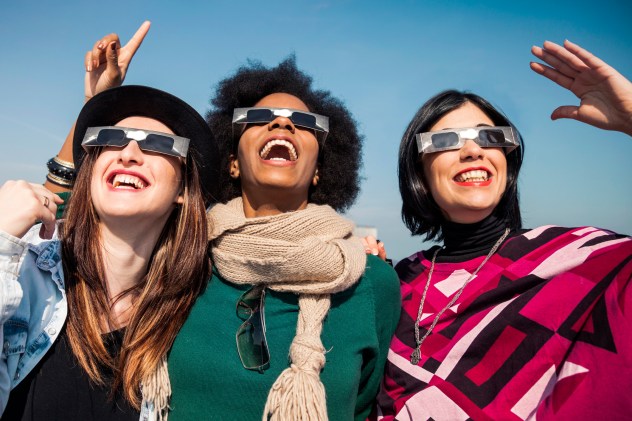 A group of women wearing eclipse glasses to safely look at the sun during a solar eclipse. (Getty/LeoPatrizi)

Medford and Eugene, Oregon, are the most populated cities in the state where the eclipse will be visible, with Portland and Salem, Oregon, located just outside of the path.

Is traveling for the annular solar eclipse worth it?

"Some eclipse chasers are only interested in total solar eclipses because of the excitement of totality and seeing another beautiful corona," Telepun said. "However, others still appreciate the astronomical alignment of an annular eclipse. The perspective from space is fascinating. Everything about predicting an annular eclipse is the same as a total eclipse."

During both the 2023 and 2024 eclipses, people everywhere across the contiguous U.S. and most of Canada and Mexico will experience at least a partial solar eclipse. The closer people are to the center path of the eclipse, the more dramatic the effects will be as the moon temporarily blocks out some or most of the sunlight.

During both eclipses, the reduction of sunlight will cause the temperature to drop, convective clouds could dissipate and pinhole projection of crescents will occur, according to Telepun. 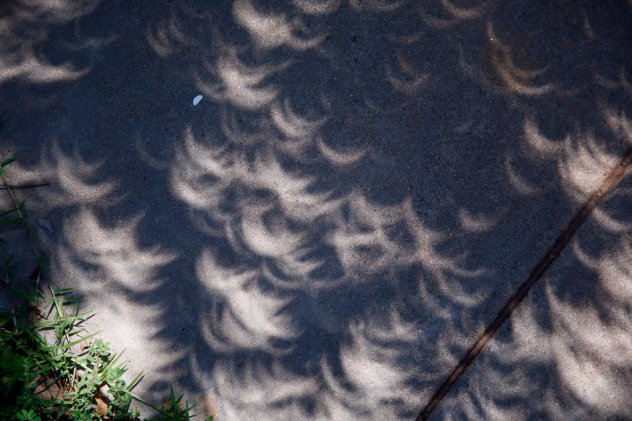 Crescent-shaped shadows are pictured on a sidewalk as light passes through tree leaves during a partial solar eclipse in Oklahoma City, Monday, Aug. 21, 2017. (AP Photo/Sue Ogrocki)

For photographers, the 2023 annular solar eclipse will be the perfect warmup ahead of the highly anticipated 2024 total solar eclipse.

"A tremendous benefit of the 2023 annular eclipse is that it can be a practice session for novice eclipse photographers," Telepun explained. "Suppose 2024 is your first total solar eclipse, or perhaps it's your second because you imaged 2017. In that case, this annular eclipse is an opportunity to test your preparation, gear, and setup. You can practice almost everything required to be successful in 2024. "

Capturing perfectly timed images of the annular eclipse can also lead to breathtaking photographs without the sun's corona visible, like what occurs during a total eclipse.

"Creating a time-lapse sequence of the eclipse with the annulus centered between the two sets of partial phases is challenging and gratifying," Telepun added. 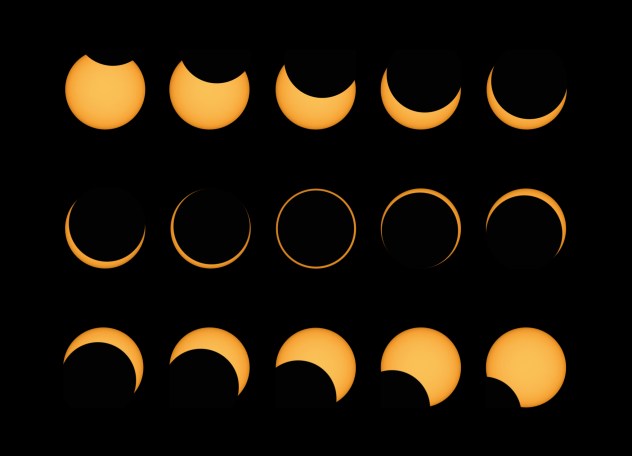 The back-to-back celestial alignments will be the most impressive solar eclipses visible from the contiguous U.S. for two decades before two total solar eclipses unfold over the country in 2044 and 2045.

Content for this article was provided by Dr. Gordon Telepun. He is an expert eclipse photographer and eclipse educator. His new eBook “Eclipse Day – 2024 and More! How to enjoy, observe and photograph a total solar eclipse” is a comprehensive guide to preparing for all aspects of the 2024 solar eclipse and is available for Apple iPads, Android tablets, and a PDF for Windows computers. He is also the developer of the mobile app Solar Eclipse Timer which calculates the precise contact times of an eclipse and does audible countdowns to the contact times, max eclipse, and announces when to observe for the interesting partial phase phenomena. More information about his book and app can be found at www.solareclipsetimer.com.