The surface of the sun was crackling with activity in 2022, and NASA condensed 133 days of stellar images into one hypnotic video.

Experts are now calling it “one of the richest and biggest repositories of solar image data available to mankind.”

The sun is the heartbeat of the solar system, and a new video reveals how hectic it was on the surface of the sun during the second half of 2022.

NASA released a mesmerizing, 133-day timelapse of the sun that shows the stellar activity from Aug. 12 through Dec. 22, 2022. The timelapse is comprised of tens of thousands of individual photographs taken by NASA's Solar Dynamics Observatory (SDO), which has been focused on the sun for nearly 13 years. The result was one of the richest and biggest repositories of solar image data available to humankind. 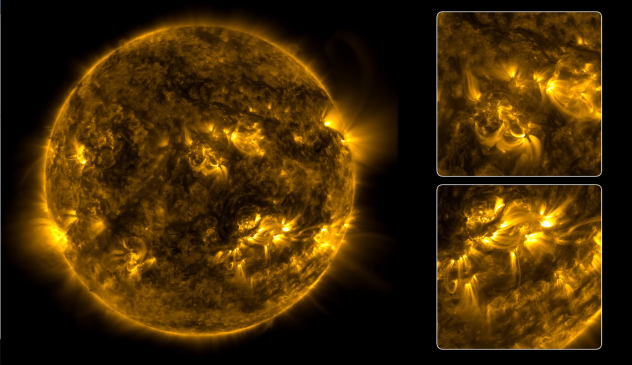 An image of the sun captured by the Solar Dynamics Observatory on Aug. 13, 2022. (NASA/SDO)

The sun's appearance in the video is different than what humans see when looking at the sun with protective solar filters. The instruments used by the SDO capture various wavelengths of light, which give scientists different ways to analyze what is happening on the surface of the sun.

An animation showing various images of the sun on Jan. 13, 2023, with each image showing the sun's appearance through a different wavelength of light. (NOAA/GOES-16).

Monitoring the sun is crucial for predicting space weather, which can have real-life implications on Earth.

"Space weather refers to changes in the magnetosphere, ionosphere, and thermosphere that can affect our technological systems and can endanger human life or health," NASA explained. "These changes start at the Sun and move to the Earth."

One of the most significant effects of space weather is the formation of the Aurora Borealis and the Aurora Australis. Typically, the aurora glows over areas near the magnetic north and south poles, but when space weather is tumultuous, the celestial lights can be seen in the mid-latitudes, including the contiguous United States.

Intense solar activity could also cause issues with GPS systems, fluctuations with power grids on Earth and an increase in radiation exposure for astronauts on the International Space Station.

In addition to the SDO, NASA and NOAA gather additional data from the sun with the newest generation of GOES weather satellites.

The satellites carry sophisticated extreme ultraviolet telescopes that help detect solar flares and other events on the sun that could potentially impact the Earth while other instruments on the satellites keep a close eye on the weather systems down on Earth.