An analysis found that the star has a strange companion responsible for what the researchers estimate to be a "seven-year photobomb." 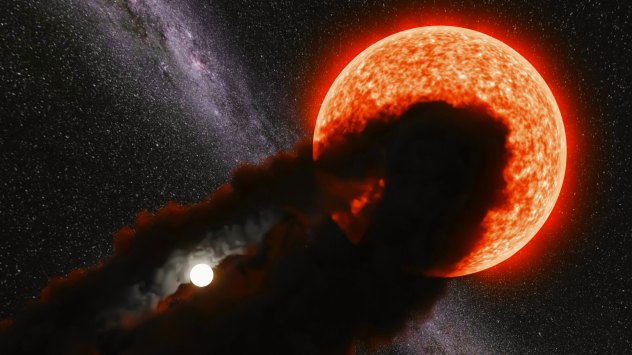 An artistic rending of the star Gaia17bpp being partially eclipsed by the dust cloud surrounding a smaller companion star. (Anastasios Tzanidakis)

(CNN) -- Astronomers might have solved the mystery behind an unusually brightening star.

University of Washington doctoral student Anastasios Tzanidakis and research assistant professor of astronomy James Davenport were searching for "stars behaving strangely" when they received an alert about a potential stellar oddity from the Gaia spacecraft.

The space observatory, launched by the European Space Agency in 2013, is on a mission to create the most precise 3D map of the Milky Way galaxy to date. The astronomers focused on Gaia17bpp, a star that had gradually increased in luminosity over a 2.5-year period.

The results of their investigation and analysis of the star, shared Tuesday at the 241st meeting of the American Astronomical Society in Seattle, revealed that the star itself didn't change. Instead, the star has a strange companion responsible for what the researchers estimate to be a "seven-year photobomb."

"We believe that this star is part of an exceptionally rare type of binary system, between a large, puffy older star — Gaia17bpp — and a small companion star that is surrounded by an expansive disk of dusty material," said Tzanidakis in a statement.

"Based on our analysis, these two stars orbit each other over an exceptionally long period of time — as much as 1,000 years. So, catching this bright star being eclipsed by its dusty companion is a once-in-a-lifetime opportunity."

The Gaia spacecraft began observing the star in 2014. The researchers pulled together all of Gaia's observations of the star and tracked down other observations of Gaia17bpp that were taken by Pan-STARRS1 telescope in Hawaii, the NASA WISE/NEOWISE mission and the Zwicky Transient Facility in California going back to 2010.

By comparing the images of Gaia17bpp, the researchers determined that the star's brightness dimmed by 4.5 magnitudes, or 67 times. It remained this way for 7 years, from 2012 to 2019.

The astronomers just happened to observe the star at the end of an eclipse that lasted for years.

No other stars located near Gaia17bpp have exhibited any dimming of this magnitude. The team also searched through a digital catalog of astro-photographic plates at Harvard University dating back to the 1950s.

"Over 66 years of observational history, we found no other signs of significant dimming in this star," Tzanidakis said.

So what happened to Gaia17bpp? "Based on the data currently available, this star appears to have a slow-moving companion that is surrounded by a large disk of material," Tzanidakis said. "If that material were in the solar system, it would extend from the sun to Earth's orbit, or farther."

The star Gaia17bpp, circled in red, was captured in this image from the Pan-STARRS1 telescope. (Anastasios Tzanidakis/Pan-STARRS1/DSS)

Although Gaia17bpp is unique to have such a long eclipse, it's not the only binary star system to showcase dimming behavior. Astronomers are also intrigued by Epsilon Aurigae, a star in that experiences an eclipse for two out of every 27 years by a large companion -- but the actually identity of the companion remains a mystery.

The giant star Betelgeuse also attracted attention from astronomers when it dramatically dimmed in late 2019, inciting speculation that it was going to explode into a supernova. Instead, the star had a dusty tantrum.

For Gaia17bpp, the dust-making stellar companion could be a small dead star called a white dwarf, but they aren't quite sure what could be contributing to the disk of debris around it.

Whatever the identity of its companion is, Gaia17bpp and its mysterious cosmic partner are so distant from one another that another eclipse is centuries away.

"This was a serendipitous discovery," Tzanidakis said. "If we had been a few years off, we would've missed it. It also indicates that these types of binaries might be much more common. If so, we need to come up with theories about how this type of pairing even arose. It's definitely an oddity, but it might be much more common than anyone has appreciated."