US government has received more than 350 new UFO reports 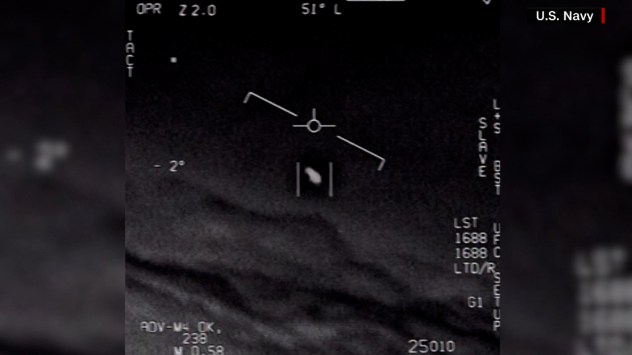 The US government has received over 350 new reports of what the US government terms "unidentified aerial phenomenon," commonly known as UFOs, since March of 2021 -- roughly half of which are so far unexplained, according to a report released on January 12. (Photo/ US Navy)

CNN) -- The US government has received over 350 new reports of what the US government terms "unidentified aerial phenomenon," commonly known as UFOs, since March of 2021 -- roughly half of which are so far unexplained, according to a report from the Office of the Director of National Intelligence released on Thursday.

According to the report, the Pentagon office responsible for tracking and studying the sightings has preliminarily identified 163 of the reports as "balloon or balloon-entities." A handful of other reports have been attributed to drones, birds, weather events or airborne debris like plastic bags.

But "initial characterization does not mean positively resolved or unidentified," the report cautioned. And the remaining 171 reported sightings of UAPs or UFOs continue to be unexplained by the US government.

"Some of these uncharacterized UAP appear to have demonstrated unusual flight characteristics or performance capabilities and require further analysis," the report found.

In short, the intelligence community and the Pentagon still appear to have no explanation for at least some of a series of mysterious flying objects that have been seen moving through restricted military airspace over the last several decades. The majority of the new reports came from US Navy and Air Force pilots and operators "who witnessed UAP during the course of their operational duties and reported the events," according to the report.

Although the report warned that UAP "pose a safety of flight and collision hazard to air assets" that could require pilots to "adjust flight patterns," the report stated that there have been no reported collisions between US aircraft and UAP to date.

The Defense Department, under pressure from Congress to investigate so-called UFO or UAP sightings, has actively encouraged pilots and other personnel to report unexplained sightings. The intelligence community released its first report on the matter in 2021.

That report examined 144 reports of UAPs, only one of which investigators were able to explain by the end of the study. Investigators found no evidence that the sightings represented either extraterrestrial life or a major technological advancement by a foreign adversary like Russia or China, but acknowledge that is a possible explanation.

Congress in its year-end defense spending bill then required the Pentagon and the intelligence community to study and report on the matter.

The Thursday report showed a dramatic increase in reported incidents since the 2021 report was issued, an increase that investigators attribute in part to "a better understanding of the possible threats that UAP may represent, either as safety of flight hazards or as potential adversary collection platforms" and in part due to "reduced stigma surrounding UAP reporting."

Although some of the 366 newly identified reports cover incidents that occurred in the 17 years prior to March of 2021, 250 of the recorded sightings have taken place since that date.

The Thursday report acknowledged the ongoing possibility that the sightings may represent a foreign intelligence-collection platform, but investigators do not appear to have amassed any evidence to support that conclusion.

"UAP events continue to occur in restricted or sensitive airspace, highlighting possible concerns for safety of flight or adversary collection activity," the report said. "We continue to assess that this may result from a collection bias due to the number of active aircraft and sensors, combined with focused attention and guidance to report anomalies."

The Pentagon and the intelligence community "will continue to investigate any evidence of possible foreign government involvement in UAP events," the report said.

"I appreciate the effort undertaken by the ODNI to study and characterize unidentified aerial phenomena reports, and their commitment to ensuring transparency by releasing an unclassified summary to the American public. ... Unidentified aerial phenomena remain a national security matter, and I will continue to support thorough investigations of all UAP reports and oversight by the Congress."