Half a decade has passed since the sun, moon and Earth aligned to create the Great American Eclipse, but people still recall the phenomenon like it happened yesterday.

It was 1:21 p.m. in Carbondale, Illinois, but the sun was not shining. The sky was dark, the birds had stopped chirping, and thousands of people looked skyward to witness a breathtaking celestial sight.

A similar scene unfolded in countless towns across the country on Aug. 21, 2017, as the sun, moon and Earth aligned perfectly to create a total solar eclipse -- the first that was visible over the contiguous U.S. in 38 years.

Five years later, the memories are still fresh in the minds of those who witnessed it.

"It was probably one of the more spiritual experiences of my life," AccuWeather Storm Chaser Tony Laubach said. Laubach lived near Carbondale in 2017 and was able to experience the eclipse from the convenience of his backyard.

The total solar eclipse was able to be seen only in a narrow zone, known as the path of totality, that stretched diagonally across the nation from Oregon to South Carolina. Since it was witnessed exclusively from the U.S., the event became known as the Great American Eclipse.

Carbondale, located in southern Illinois about 80 miles southeast of St. Louis, was one of the most popular spots to view the eclipse as the moon completely blocked out the sun there for longer than any other spot in the country. However, even folks who traveled to Carbondale were in the shadow of the moon only for a mere two minutes and 41 seconds. 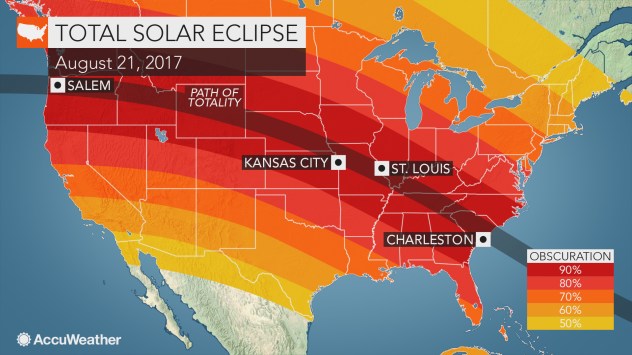 Most of the United States was able to witness an impressive partial solar eclipse on Aug. 21, 2017, but only people in the path of totality were able to see the total solar eclipse.

Among the millions of people who witnessed the event in person, plus the countless more who viewed it online, the 2017 eclipse became the most-viewed solar eclipse in history, according to VOX.

Extreme Meteorologist Reed Timmer, who has chased thousands of tornadoes, called the eclipse a "life-changing event" as he looked on from Greenville, South Carolina. "The Great American Eclipse was the most amazing sight I have ever witnessed!!"

AccuWeather Senior Weather Editor Jesse Ferrell was in Greenville with Timmer for the eclipse and had a similar sentiment, saying that "it was a completely different, life-changing experience."

“It was a very primal experience,” Julie Vigeland, of Portland, Oregon, told The Associated Press after watching the eclipse.

“That was better than any photo," Joe Dellinger told the AP after watching the eclipse from Jefferson City, Missouri, through a telescope.

As mesmerizing as the 2017 eclipse was, an even more impressive show is going to unfold in less than two years' time.

On April 8, 2024, the sun, moon and Earth will once again align to create a total solar eclipse over North America. Cities such as Dallas, Indianapolis, Cleveland and Montreal will be among the prime viewing spots.

Not only will the eclipse occur in the skies over major cities, but it will last significantly longer than the one in 2017 with the sun being completely blocked out for over four minutes in parts of Texas, Oklahoma, Arkansas, Missouri, Illinois and Indiana.

Anyone planning on viewing the upcoming eclipse will need to purchase specially designed solar filters, also known as eclipse glasses, that allow people to look at the sun safely. Looking at the sun without a proper solar filter, even for a few seconds, can lead to eye damage. 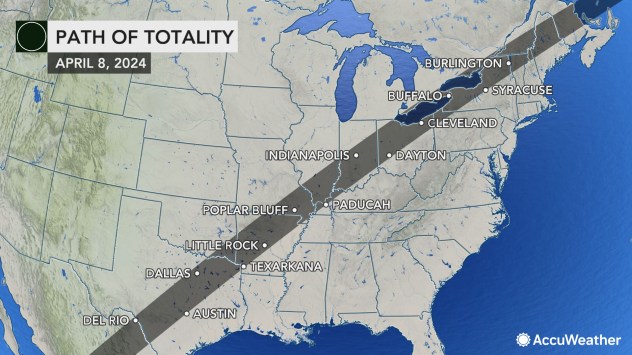 However, cloudy weather is a much bigger concern for the impending springtime eclipse compared to the one that unfolded in the summer of 2017.

"The weather in April could present challenges along the entire path," eclipse photography expert Gordon Telepun told AccuWeather. "Watching the weather fronts a few days before the eclipse will be essential to success."

After the 2024 eclipse, people in the contiguous U.S. will have to wait until 2044 or 2045 for the next chance to view a total solar eclipse.

"The opportunity to see an eclipse without traveling internationally should not be missed," Telepun added. "It’s two years before the eclipse, but it is not too early to begin making plans."

Scientists: 2nd asteroid may have contributed to dinosaur extinction