The Southwest monsoon is in full force across India, and rainfall totals are climbing to staggering levels as rising floodwaters leave thousands stranded.

During a five-day stretch from June 23-28, Cherrapunji, located in a region of India to the northeast of Bangladesh, reported 1,969 mm (77.51 inches). Around 572 mm (22.52 inches) of that total fell in the last 24 hours of that stretch, stated AccuWeather Senior Meteorologist Jim Andrews.

As of last Friday, June 26, the leading edge of the monsoon advanced through the country and moved into Pakistan. 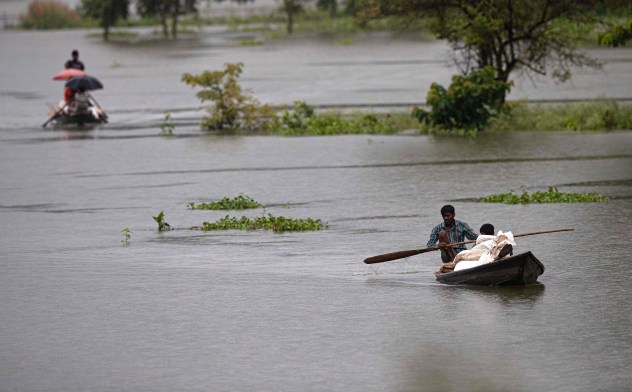 Villagers row country boats with their luggage to move to safer areas through floodwaters in Morigaon district of Assam, India, Friday, June 26, 2020. Following incessant rainfall, the Brahmaputra river and its tributaries continued to rise, flooding several districts in the state. (AP Photo/Anupam Nath)

Widespread rainfall totals of 200 mm and higher (8 or more inches) have been measured along the western coast of India, across the center of the country and into northeastern regions since the monsoon arrived throughout the month, according to the India Meteorological Department.

Gosh added that the rise in water levels flooded 19 upazilas, or regions, leaving 200,000 people stranded and thousands of hectares of farmland submerged under floodwaters.

As of Monday, many in the region are still waiting for relief as officials process the requests for help from the upazilas, reported New Age Bangladesh.

The wet season will remain in full swing across the region as occasional showers and thunderstorms persist in much of India and Bangladesh each day through midweek. However, parts of extreme northwestern India will remain largely dry, including New Delhi, which had the onset of the monsoon last week.

The areas most at risk for flooding through the end of the week will be areas that have already been hit hard by monsoon rain this month. 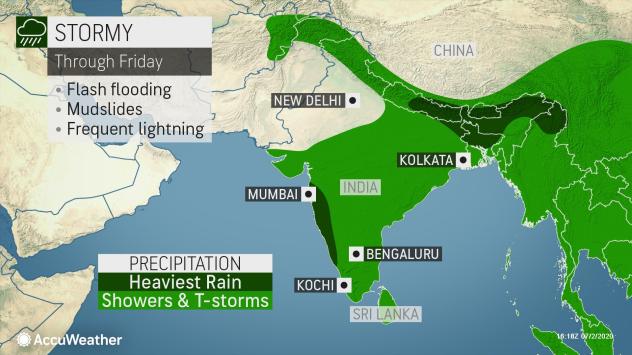 Heavy thunderstorms are expected to unfold in parts of northeastern India, Nepal, Bangladesh and Bhutan each day this week, with some locations potentially receiving 300 mm (12 inches) of rain through Friday.

Northern Myanmar also experienced heavy rains already this week, contributing to a landslide that occurred at a jade mine in the region on Thursday..

Meanwhile, drenching downpours will also continue across southwestern India from around Mumbai to western Karnataka in the coming days.

The heaviest rain in southwestern India will fall from near the coast into the Western Ghats.

Daily rainfall totals of 50-100 mm (2-4 inches) are expected for areas that receive the heaviest rain into the end of the week. An AccuWeather Local StormMax™ of 200 mm (8 inches) will be possible, especially in the rugged terrain.

By the end of the week and into the weekend, a monsoon low can develop in northeastern India and lead to locally heavy rainfall in Jharkhand, West Bengal, Chhattisgarh and Odisha. This low may eventually bring the return of rain to National Capitol Region later in the weekend and early next week. Many still cleaning up from Ida