More than a dozen states will be at risk for severe weather over the next several days.

AccuWeather meteorologists are urging residents from the southern Plains to the Southeast coast to remain weather aware this week as rounds of flooding rainfall and volatile thunderstorms unfold. The pattern could lead to a multi-day outbreak of severe weather, including tornadoes.

The same storm that brought a historic snowfall to the Rockies and High Plains and severe weather to portions of the southern Plains over the weekend brought rain and thunderstorms to the Ohio and Tennessee valleys at the beginning of the week. Across Kansas and Missouri, a couple of tornadoes were reported underneath the core of the storm.

On Tuesday, the storm will stall out over the Southern states, leading to rounds of downpours from Louisiana to the Carolinas throughout the day. A few storms can become heavy and gusty, and flash flooding will be possible where the heaviest rain persists.

In areas that receive multiple or extended downpours, there can be an AccuWeather Local StormMax™ of 5 inches of rainfall through Tuesday night. 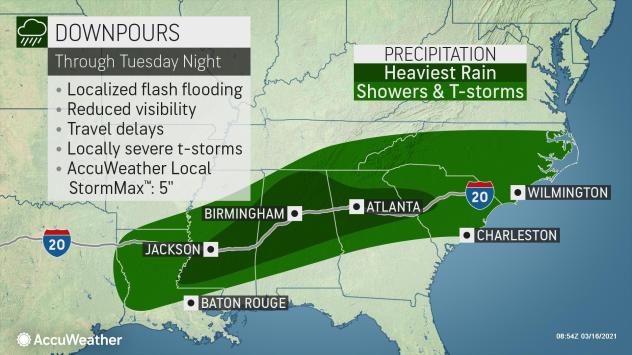 The next chance for widespread severe weather will arrive across the southern Plains Tuesday night as a storm that moved over the West on Monday emerges from the Rocky Mountains.

Here, the storm will gain strength and tap into warm, moist air from the Gulf of Mexico. As this sticky environment clashes with cooler air following in the wake of the storm, this will help to spark severe weather across the Southern states from Tuesday night through Thursday. 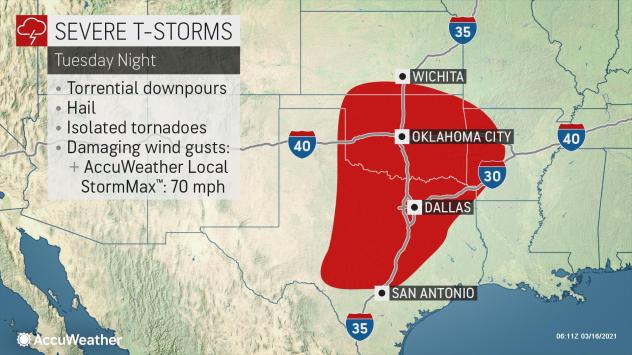 The storms late Tuesday may erupt near or just to the east of the hardest-hit areas of West Texas from over the weekend. At least 20 tornadoes were reported in the region during Saturday and Sunday, according to storm reports from the National Weather Service's Storm Prediction Center.

Doll emphasized the importance of residents keeping up-to-date on the severe weather situation, given that most of the violent storms are expected to occur after dark.

"Tornadoes at night are especially dangerous because they can strike when people are asleep. It’s very important to have a way to get severe weather notifications at all times of the day, but especially at night. The AccuWeather app can help with this," Doll said.

Wichita, Kansas; Oklahoma City and Tulsa, Oklahoma; and Dallas and Wichita Falls, Texas, are some of the locations where residents should make sure cell phones are fully charged and the volume turned up with severe alerts enabled prior to heading to bed.

Severe weather dangers will spread eastward heading into the middle and latter part of the week. It is during this time that forecasters are concerned that a full-blown outbreak of violent thunderstorms and tornadoes may occur. 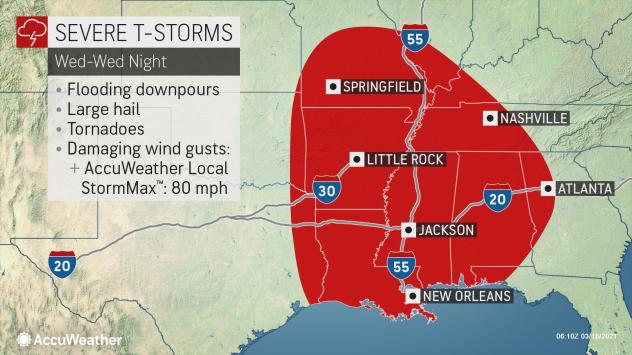 The same severe weather hazards, including hail, damaging winds and tornadoes, will exist Wednesday and Wednesday night, but farther east into the Mississippi Valley and Southeast, according to Doll.

"Roads could become flooded due to heavy rain, and hail, high winds and tornadoes could lead to property damage," Doll said. The flood risk will be greatest in areas of the South that receive repeated downpours early in the week. 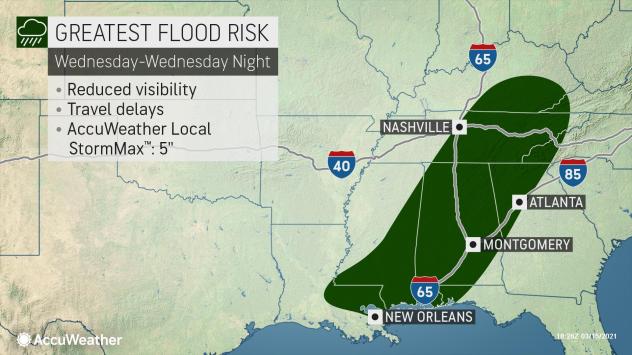 Wind gusts could reach an AccuWeather Local StormMax™ of 80 mph with the storms Tuesday night through Wednesday night, so power outages will also be a big concern.

"It is possible that the period from Wednesday afternoon to Wednesday night brings a significant number of tornadoes and may be the biggest period for tornadoes of the multiple-day severe weather threat," AccuWeather Meteorologist Matt Benz said.

"In the southeast U.S., nighttime tornadoes are more common than in any other region of the U.S.," Doll noted, again emphasizing the importance of people in the South having a way to be notified when severe weather is imminent.

Locations from New Orleans, northward to St. Louis and from Little Rock, Arkansas, to Atlanta could all be in the crosshairs of the violent weather around the middle of the week.

By Thursday, portions of Virginia through the Carolinas and into Georgia and northern Florida could face severe weather dangers, with a continued risk of tornadoes. 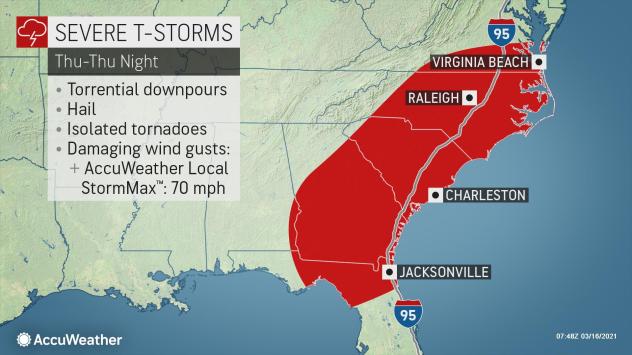 People across the region are encouraged to check AccuWeather.com and the AccuWeather app frequently for continued updates on the severe weather threat, as AccuWeather's expert team of meteorologists will be refining the forecast throughout the week.

In the meantime, forecasters urge residents to review severe weather safety steps and make sure they have a plan in place should damaging storms strike their community, especially with the peak of springtime severe weather season quickly approaching.