Through the end of the week, multiple rounds of thunderstorms will erupt from Missouri to Virginia, heightening the risk for flooding in those areas.

Following destructive thunderstorms that tore through portions of the Central states last Thursday, AccuWeather forecasters are monitoring the next potential round of severe weather in a similar area on the same day of the week.

Tranquil weather was in place across the northern Plains and Upper Midwest for days, but the silence was broken in part of the Plains when thunderstorms with high winds and large hail broke out on Wednesday.

However, a much more widespread threat of severe weather is expected into Thursday night.

"The most notable period of severe weather will begin from northeastern Nebraska to northern Wisconsin," said AccuWeather Meteorologist Andrew Johnson-Levine. 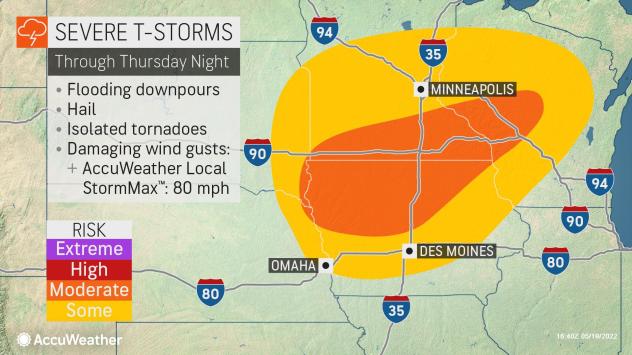 He added that hail, damaging winds, flooding and tornadoes will all be possible into Thursday night. This is an area of the country still trying to recover from last week's storms.

"Many of these areas were recently hit by destructive winds from last week's derecho, and may be more vulnerable than normal to severe weather," explained Johnson-Levine.

Structures and trees that may have been compromised by last week's storms could be more susceptible to additional damage if they are already in a weakened state. However, this event is not expected to come anywhere close to the intensity and magnitude of what occurred one week ago. Additionally, the worst of the storms should be slightly to the east of where the worst damage was sustained last week.

In response to the successive rounds of precipitation that the state has received, Minnesota Gov. Tim Walz activated the state's National Guard on Thursday evening to help counties respond to flooding.

Large hail was also reported in the state on Thursday, with some hailstones measuring up to 8 cm, or roughly three inches, in diameter close to Twin Lakes, Minnesota, according to a report sent to the National Weather Service Storm Prediction Center.

The tornado threat moved from Minnesota to Illinois, with a possible tornado churning near St. Rose in Clinton County, Illinois, Thursday evening. Widespread damage was reported north of Breese on Jamestown Road, with silo tops blown off and grain bins destroyed.

Residents and motorists traveling along interstates 35, 80, 90 and 94 will need to be wary of ponding and reduced visibility due to heavy rain.

A second zone of severe thunderstorms and flash flooding threat will focus hundreds of miles farther to the south on portions of the Ohio and middle Mississippi valleys into Thursday night. This area was hit with localized flooding downpours and severe weather from Tuesday night to Wednesday.

As the storms moved into St. Louis, Missouri, a tornado warning was issued for the area, prompting the St. Louis Lambert International Airport to advise people to stay away from the windows, Spectrum News reported. 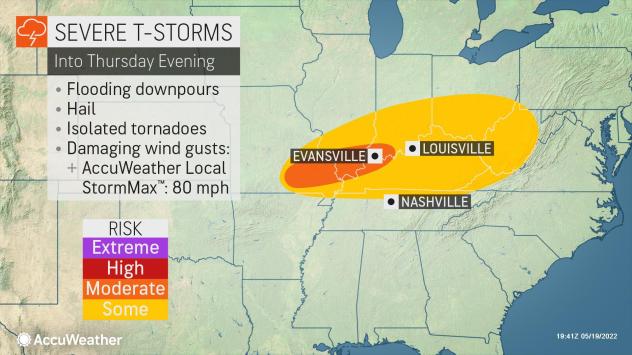 The severe threat will end in the Upper Midwest on Friday, but the risk will shift farther east. Not only will the zone shift eastward, but it will also extend much farther south.

"Intense thunderstorms may fire over a broad area of the central U.S., stretching from Texas to Michigan," said Johnson-Levine.

The tornado threat will be very low on Friday, but flooding downpours, hail and damaging wind gusts will again be concerns. Chicago, St. Louis and Dallas are just a few locations that may have severe weather on Friday. 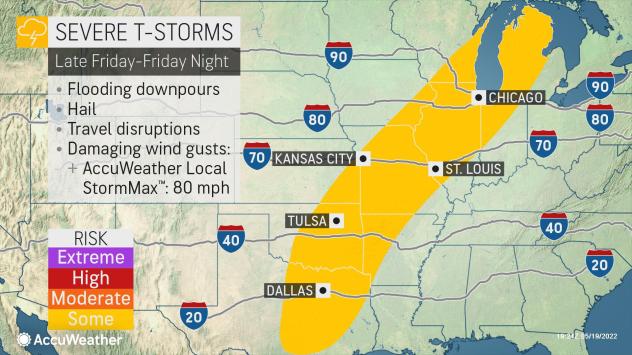 The cold front will continue to progress eastward over the weekend. Some locations in the Northeast may experience the highest temperatures so far this year before the front arrives.

"Fueled by heat more typical of July than May, severe weather may continue farther east this weekend," said Johnson-Levine.

By early next week, storms may be focused primarily over Kansas, Oklahoma and Texas. This may deliver some desperately needed rain even in the western portions of those states, which are in an extreme to exceptional drought according to the United States Drought Monitor.