A multifaceted storm system slated to bring blizzard conditions to parts of the northern Plains and record-challenging heat to portions of the mid-Atlantic will continue to produce severe weather across the center of the country into Thursday night.

Winter will go out with a bang in terms of severe weather over the Central states as spring officially arrives at 10:50 p.m. CDT on Thursday.

The same storm system that will pose a threat for severe weather into Thursday night has already brought rounds of potent storms across the south-central United States both Tuesday and Wednesday, primarily across Texas.

While still preliminary, a tornado likely tracked across the western and northern suburbs of Abilene, Texas, Wednesday night. 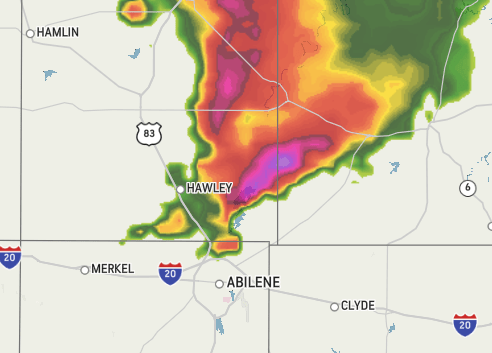 Radar image Wednesday night of a supercell that likely produced a tornado near the town of Impact, Texas (AccuWeather).

Unfortunately, the threat for more tornadic activity will cover a much larger area into Thursday night. 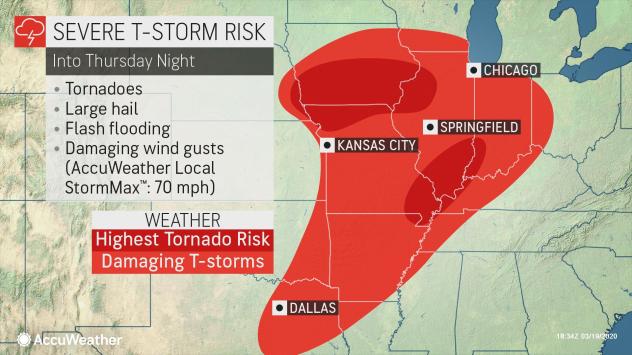 "Thursday poses the greatest risk of tornadoes of the entire multiple-day severe weather risk this week," according to AccuWeather Senior Meteorologist Alex Sosnowski.

Preliminary wind reports from the NWS Storm Prediction Center accounted at least two possible tornadoes -- one in Okfuskee County, Oklahoma, and the other in Perry County, Illinois -- at least 8 of the reports causing damage to homes and other structures. No injuries were reported as of 7:30 p.m. PDT.

A radar-confirmed tornado was tracking toward Clinton, Arkansas, just after 8 p.m. PDT.

Because multiple rounds of storms may move from southwest to northeast over the same areas on Thursday, the risk for flash flooding will be higher than on Tuesday and Wednesday.

Some of these areas, especially ones closer to the Mississippi River, have already dealt with flooding and excessive amounts of rainfall so far this year. The additional rainfall could create new flooding problems on creeks and streams. When combined with heavy rainfall farther upstream across the Midwest, flooding problems could work their way into the larger rivers by the weekend or early next week.

In addition to the risk for flooding this week, localized power outages, as well as tree, roof and property damage, could occur in any areas hit with wind gusts of 50-60 mph or higher. Any large hail could damage unprotected vehicles and damage any tender vegetation beginning to bloom across the region.

A second zone of a heightened threat of severe thunderstorms will occur near the storm system's center of circulation across the Midwest. This includes extreme southeastern Nebraska, southern and central Iowa, northern Missouri and western Illinois.

The threat for large hail, damaging wind gusts and tornadoes will be present as these thunderstorms explode into the evening hours.

As storms trek eastward, the thunderstorm threat will subside across the Midwest Thursday evening as a surge of cold air blasts into the region. 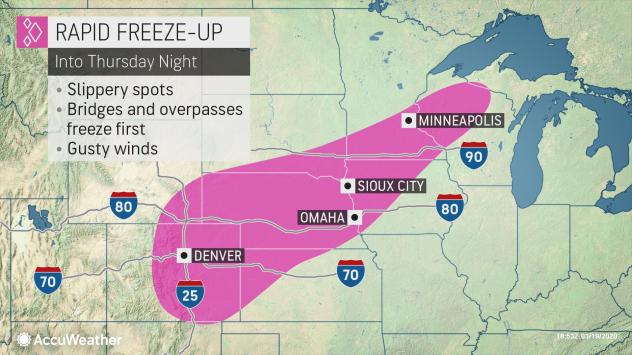 Thunderstorms will move into the Great Lakes and Ohio Valley overnight Thursday. Although the threat for severe weather will decrease, it will not completely diminish.

With the threat of severe thunderstorms lasting after sunset across the region, it is important for people living in the potential path of these storms to have the means to receive any severe weather warnings that are issued. By downloading the AccuWeather app, you can receive these warnings within seconds after they are issued by local National Weather Service offices.

While it may come off as annoying or overkill to have your phone alarm go off unexpectedly during the overnight hours, it may just be the deciding factor between life and death when severe weather tracks into your neighborhood.

If warnings are issued in your neighborhood, especially at night, seek shelter immediately and do not attempt to go see what kind of activity is going on outside. It is important to have a plan of action ready in case severe weather strikes in your area.

As the storm system strengthens, high winds will be generated in lieu of thunderstorms around the Great Lakes region. The winds can not only cause power outages and property damage, but also contribute to lakeshore flooding. 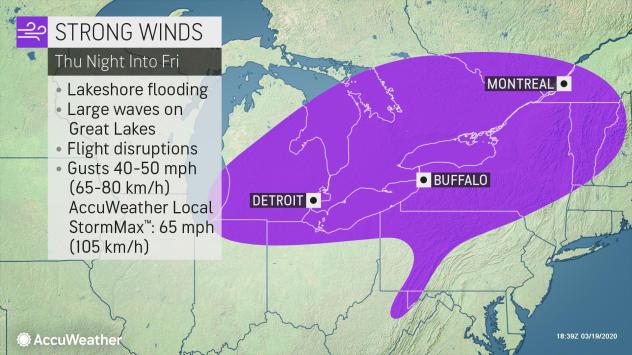 As the storm system continues to track northeastward into the day on Friday, strong to locally severe thunderstorms will threaten portions of the Ohio Valley and the Northeast. 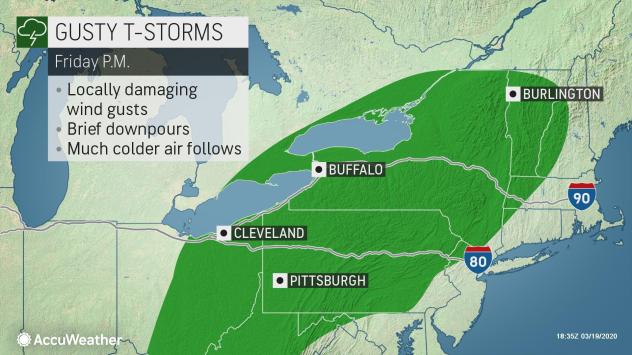